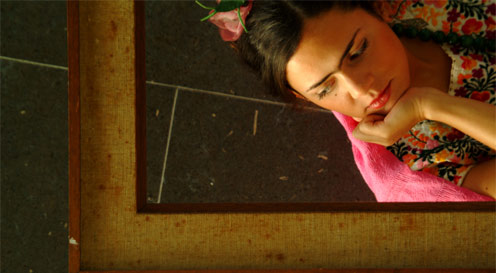 Kahlorado is a world once inhabited by Frida

The very first concrete piece of knowledge I ever acquired regarding Frida Kahlo was that she possessed a unibrow. Pop culture and its influence on our society clearly played a role in absorbing that piece of trivia in the context of her being a feminist icon. But Frida Kahlo herself also makes it clear in many of her paintings. As a woman, and as an artist, Frida gave the world a viciously uncompromised look at being a Mexican woman, and all the trials and tribulations that came with her territory, from her physical features to her multi-layered feelings about her world and the world surrounding her. More importantly, she creates a multitude of questions regarding gender, life, experience, and what it truly means to plumb the depths of human emotions.

Perhaps the streak that makes her work so vibrant in our world of art is that she is so up front about everything, and yet a curtain remains pulled. The viewer is given an often harsh and shocking look at Frida and her life, sometimes bordering on the grotesque, but is also given a definite mystique when they look at her works. The combination of clarity and shadow provides a sense of intrigue, and tragedy often also becomes laced in her works. A brooding quality remains, making me wonder if it would ever be possible to be comfortable with a conclusion regarding one of her works.

Putting Kahlo’s work into a nice neat category would be very much like saying that Picasso was simply a Cubist– the scope you put on an artist cannot be so miniscule and so caging. Picasso spent a good part of his formative years pastiching various known influences before he became one himself.

Kahlo’s work often gets mixed in with the “folk art” genre, with artists like Henri Rousseau joining her ranks. Other scholars have deemed her work as Surrealist in nature. Both of these are accurate but not totally satisfying. Kahlo’s work escapes both of these generalisations almost entirely because she is different. She is not a postal worker painting for fun in France, nor is she a Spanish man with a theatrical side as explosive as his work. As a woman, and as a Mexican, she is automatically not the “default” – the white, Western male- that has controlled art for centuries, if not millennia. Categorising her work into genres created for and usually populated by the white Western male is far too stale for Kahlo’s work. This becomes obvious when we look at pieces like “My Grandparents, My Parents, and I”, painted in 1936.

With this piece, we can see a family tree in a semi-conventional format- the two grandparents occupy the upper left and right quadrants of the canvas, with Frida’s parents in the middle. Frida depicts herself as a naked girl, holding in a casually childish manner a red ribbon that weaves them all together, standing in the middle of a small enclosed garden, her unibrow even then present. Her grandparents and parents are posed in stiff, Daguerreotype poses, in formal clothes, while Frida herself is nude and unposed, as a child is supposed to be. To add to this, in the middle of Frida’s mother’s white formal gown is a fetus, in the same orangey-red as the ribbon in child-Frida’s hand. Slightly below this shows a moment of conception for either Frida or the fetus depicted- which, we cannot be sure. Is Frida the fetus? The landscape setting is unusual, giving a barren, hilly land speckled with cacti. The house that child-Frida stands in is severely out of proportion, purposefully so, and the naivete with which the painting is executed permeates every interpretation. It is something so full of Frida, exuding her history and her story without actually telling us anything. The paradox of Frida Kahlo continues.

Brutally honest and at the same time a mystery

Describing herself through her painting is clear in the painful and disturbing “Henry Ford Hospital”, painted in 1932. Kahlo never shied away from the strange, the mysterious, and the terrifyingly honest, and this painting depicts pure tragedy woven into a bloody masterpiece. After suffering a miscarriage in the Henry Ford Hospital on the 4th of July in Detroit, she paints herself lying on blood-soaked sheets, a tear running down her left cheek. Frida’s body looks morphed and out of proportion, her hand looks clumsy and desperate, the bed far too big. From her womb six red ribbons again link six things to her. A model of a uterus, complete with spine, occupies the upper left corner, signifying that her anatomy is not medically fit for having children.

The second is alien-looking fetus, looking also out of proportion and pathetically lifeless. It is important to note that the fetus is male. Being from Mexico, Frida as a woman was supposed to fulfill the role of mother, and little else- bearing a boy was even better. Frida, unable to have children due to her medical problems that plagued her entire life, is left with a depiction of possibility in the male child that never was. A pelvis, sinister looking machine, and a purple orchid take up the bottom half of the things tied to ribbons- the pelvis is fractured, making it medically impossible for her to bear children naturally. The painting reeks of guilt, frustration, indescribable pain, exhaustion, and desperation, but it also carries with it a refreshing feeling of honesty- this is a woman’s experience. Not all women can bear children, not all women are meant to be mothers, and this struggle is isolated purely for women. This is a feminine pain that no man can possibly understand- the carrying of life, the potential for it, and the extinguishing of it, all happening inside your own anatomy.

Frida Kahlo’s paintings are not made in a vacuum. They are reactions to her environment, the people around her, and the expectations that were put upon her. However, although they are not made by an isolated individual, they isolate themselves. Frida puts herself on the canvas almost trying to convey herself to the world, but at the same cloistering her true self in the paint, keeping our true understanding of her intentions at bay. Of her work, she says:

Frida and her paintings are synonymous- they are literal pieces of her flesh and blood, her very biology, and she leaves them there, not totally allowing us clarity, but just enough to keep us fascinated. She makes them entirely for expressing herself, but in such a way that unraveling her point is difficult at best, which only adds to the cloud of mystique around this amazing artist.

Frida and her work illustrate her life story, which seems more like a serial fiction novel than a real life. Born from a Mexican mother and a European father, she contracted polio as a child and lived forever with one leg smaller than the other. When she was 18, she enrolled in a pre-med program, but a traffic accident left her crippled for months afterward, silencing her hopes of becoming involved in medicine. After this, she began painting in a purposefully naïve style, and underwent over 30 operations to fix her spine, pelvis and other areas where she suffered significant pain from the accident. The rest of her life was marred by frequent periods of intense pain and being bedridden, as well as making it impossible for her to bear children. At the age of 22, she married Diego Rivera, the Mexican artist, who was 20 years older than her. At first, he was more of a teacher and guide for the eager artist, but in 1929 they became husband and wife. Their marriage is still today known as a tumultuous, at times almost violent affair, and something that impacted much of Frida’s work. Although she and Rivera both engaged in affairs, and Kahlo had some bi-sexual tendencies, they stayed together after a short separation and divorce from 1938 until 1940, and remained in each other’s lives until Kahlo’s death in 1954. During this time, Frida and Rivera entertained communist ideals, and welcomed celebrities like Leon Trotsky and Nelson Rockefeller into their home.

Her life with Diego was a torrid, dramatic one, as they were both people with personalities as vast as the country they came from. Although Frida was raised in the middle class, Diego came from a well-to-do family, a descendant of Spanish nobility. He travelled to Italy and France to study his art, and eventually made it to Moscow, where he began his foray into Communism. After meeting Frida in Mexico City, then marrying her, his love of travel and adventures didn’t end: both Frida and Diego were notoriously unfaithful to one another. Diego, being almost a force of nature himself, was a formidably sized man with a temper, and Frida herself was a fiery, hardened veteran of disease and pain. Together they remain an enigmatic, darkly glamorous couple whose chemistry and talent delight the eye today.

Her work lives on in colour and vitality

Exhibitions of Frida’s work can be found all over the globe. A magnificent exhibition of many of her smaller pieces, alongside some by Rivera, was to be found in Istanbul, Turkey in March 2011 at the Pera Museum near Taxim Square. The museum set them on the top floor, and separated them in many small rooms, making the exhibit more private for the viewer. Spending time in front of a Kahlo painting is akin to standing next to a very vital person. The energy teeming from the work almost seems to make the air around it vibrate, I kid you not. Standing in front of one for extensive periods of time does not seem ridiculous: the lines of her paintings are naive, the colors basic but creative, and the matter that she portrayed always seems to be on a different plane than reality. Kahlo’s work can be seen in museums such as the MoMA in New York City, the LACMA in Los Angeles, the San Francisco Museum of Modern Art, and the Casa Azul in Mexico City, the house that she grew up and lived in with Diego.

If you only want to take one thing with you, it is ought to be this:

Frida leaves the viewer with more questions than answers, asks more questions and gives more information than most artists, while still remaining faithful to herself and keeping a cloak over herself. Her transparency in being a woman, a minority, and a member of the human race is both shocking and beautiful, and her art is unlikely to disappear from the memory of the world anytime soon. 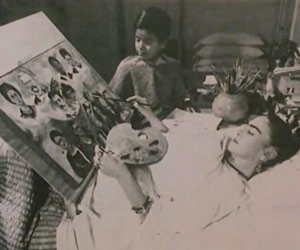 A Woman in Rebellion, a full-length video biography by Magdalena Carmen 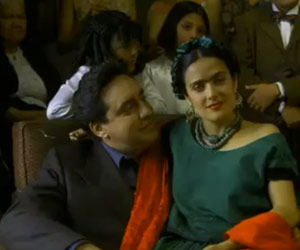 Trailer for 'Frida' a cinematic drama about her life in an accessible format, starring Selma Hayek 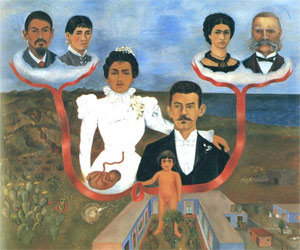 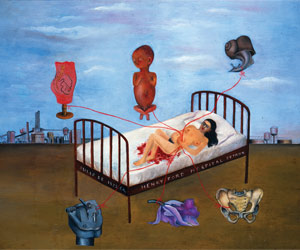