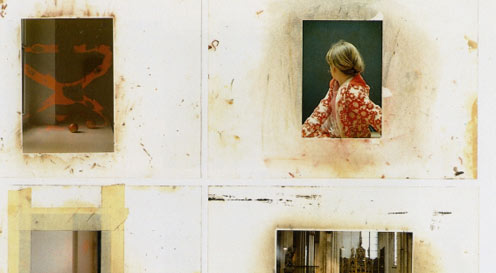 Having dealt with consumer culture, war destruction, naziism and euthanasia, it may neither be the greatest work by Gerhard Richter nor the one intended to be the most culturally or politically significant.

Still there is something mesmerising about this hyper-real oil painting from 1988 that gives it a perennial popularity for decades to come. It is part of the permanent collection of the Saint Louis Art Museum. However poor old Betty has proved to be a nomad at heart. She is loaned and exhibited extensively around the world’s most prestigious art galleries and museums counting the National Portrait Gallery, Tate Modern and Centre Pompidou.

Measuring 102cm x 72cm, the canvas is a portrait of Gerhard Richter’s daughter Betty from a photo taken 10 years before the artist painted it. It is part of a series of oil paintings of his children, Isa Genzken second wife and the canvas ‘Lesende’/Reading (1994) portraying Sabine Moritz, who became his third wife in 1995. Evidently in this Vermeer quality rendition and direct reference back in time, there is no attempt here to hide the fact that a photo has acted as the modern-age sketch either. Invariably, one of the questions asked about these works is why were they not enlarged photos in the first place? And now that they are paintings, why do they not have those smeared dry brush or squeegee strokes to suggest the ephemeral in so many of other figurative representations from the artist?

On balance and in terms of popularity at least, the pose in Betty is breaking conventions in portraiture. The daughter turns away from the camera and the viewer looks into one of Richter’s monochrome works from the mid 70s. For this painting it would be tempting to whip up some psycho-babble about the inherent isolation in that disenfranchised stance. Alternatively, you could draw on Edward Hopper or Caspar David Friedrich to say something along the same lines. Similarly, some might suggest a narrative of an adolescent going through the rite of first turning independent from her parents in order to become an interdependent individual in society.

But what we do know is that it draws us into the painting and its beauty. We instantly, want to know more about the sitter, and we realise that a portrait really is a contradiction in own terms. It never really tells us exactly who a person is. You just see a fraction of it all and in a fleeting moment.

Betty in the wider Richter context

As for the aforementioned questions, Gerhard Richter himself breaks down all the dogma and received wisdom in the art world. What he repeatedly tells himself is ‘I’m allowed to do this’. An artist’s career is normally in free fall when he changes style and direction. But Richter somehow defies this logic by simply not recognising it. For instance, he does not personally see one mode of expression or style a succession of the other. To exemplify how non-departmental his brain functions, just look at his oeuvre. Bizarrely, he had a short crush on Pop art and societal commentary when he fled west of the iron curtain. While he is known mostly for painting, he has also pulled off Duchampian style installations such as 4 panes of glass and mounting a large mirror in an exhibition.

At first Richter’s painting would appear to have been a pendulum between abstract and figurative work. In the 50s, he painted abstract paintings. In the sixties figurative work relying heavily on photography, and in the 90 and onwards abstraction took over again.

But you soon realise how wrong and ‘perhaps deliberately curated’ this perception is. Take for instance the year 1968 when he painted both figurative portraits and abstract paintings in parallel. Even his abstract works are not all what you would expect. With a scant disregard for modernist chronology, he incorporates various abstract traits you would normally not see together. E.g you could have areas of early geometric abstraction, as contrasted by traits of the new wild and abstract expressionism.

Often enough Gerhard Richter has worked entirely in monochrome mid-greys, which is in stark contrast to later abstract work in vivid colours. The photo paintings of the 60s drew almost as a record, and thus as a commentary upon magazines, film stills, dusty family albums and newspaper clippings. Most of them dealt with uncomfortable facts such as the WW2 destruction of Dresden in former East Germany, where the artist grew up. Just about the 80s he created work that you could best sum up as vanitas. Less direct references, are his sky triptych, which are uncannily Richter-like, but yet again do not really imply anything other than clouds and their transient nature.

In this video snippet, the Khan academy seeks to contextualise Betty by looking at the entire production of the artist. Their take is that Richter has wanted to distance himself from and transcend the various political structures of Nazi-, Communist- and Capitalist governments. In reality, though, the work may actually just be a deeply personal statement about family life. 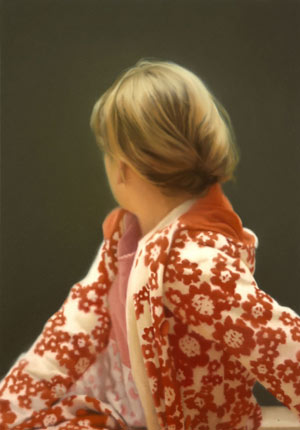 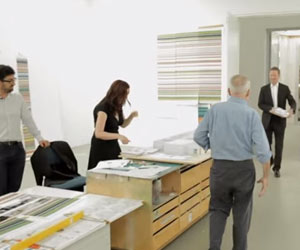