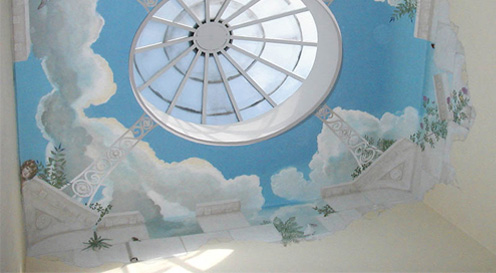 Windsor, UK based painter Gordon Collett is a muralist, but one who particularly likes to play with the manipulation of apparent space by the use of architectural trompe l’œil murals. He has painted murals in the UK, France, Spain and Holland for many private and commercial clients. He also does oil on canvas portraiture, and pen and ink work for Ex Libris designs, for which as well he has an international client base.

His artist statement would be: “I act in the belief that a good trompe l’œil wall painting is one that allows the viewer to forget that there is a wall there at all, and to visually enter something beyond it, letting your eye lead you into another world. But more especially I also love the fun of them!”

It is this sense of play that brings in many commissions from people who are after something more fun, something to add a bit of enchantment. Often they are prompted by a desire to deal with some kind of architecturally poor or ugly area in their homes in an amusing or theatrical manner.

For most of us, enchantment in the home must be relatively rare. I ask Gordon why. “The problem is” in Gordon’s view, “a current mindset of keeping homes neutral. Buying and selling has turned homes into commodities: think of your potential buyers; make your house a blank canvas; whatever you do, don’t personalise. A mantra for a conformist regime inside the home,” he says. “Most people are nervous of doing anything original and distinctive, which is a shame because they are really missing out.”

The bookcase and the ballerina

(Photo 1 right) Architectural illusion here transforms one of those awkward spaces. Gordon has created a niche bookcase, complete with books (89 separate joke titles!) and decorative objects, to balance a window on a narrow landing. Everything, right down to the cast shadows, is so perfectly designed it looks real. That includes a remarkable reproduction, in 2D, of a ballerina statuette, made to be a companion piece to an original 3D work which stands in the entrance hall downstairs. She has been painted into the corner of the landing, but from the correct viewing angle at the top of the stairs she looks completely three dimensional, and very real.

This technique of creating an image in front of the wall plane, using intersecting walls, has become a trade mark for the artist (he recently did a self-portrait in this method). It also has generated some amusing moments, on one occasion a client attempted to put her coffee cup on a painted table whilst discussing another area of the same large mural. Elsewhere, actually doing work on a TV show reproducing the same ballerina as above, one of the presenters asked “why don’t you move the table before painting the skirting board?” while Gordon was painting the wall adjoining the image.

A fake door on the same landing as the ballerina statuette is so convincing that it fools visitors every time, with them being sent quite deliberately and mischievously to it. “They reach out to grasp the handle,” the owner says, “and only then do they realize there isn’t a handle at all. Even our grandchildren persist in believing there’s something behind that door.”

The back stairs and over mantle

This simple idea was used to make something of a plain door to a boiler room. In the original pre-conversion to flats layout of this fine Edwardian house, this area was the “back stairs”, the steps to the servants’ quarters. Gordon put them back, complete with eavesdropping somebody, who just happens to be wearing the client’s favourite shoes.

(See photo 2 right) In the same apartment we have the client himself, or at least his reflection. Gordon does not limit his trompe l’œils to murals, they come in many other guises. This is exemplified by this oil portrait, “The Elsewhere Mr. Finn”. If you look closely the objects on the mantelpiece are real, but the over-mantel mirror and the reflections, including the client’s rear-view portrait, are all painted.

A Mediterranean beach and other ugly cupboards

(See Photo 3 right) What do you do with an ugly cupboard staring at you? Well if you are one of Gordon’s patrons you turn it into something very different. What is an essential water tank cupboard has now become a doorway to a roof top Mediterranean beach with azure sky, crystal sea and golden sand, now thoughts of sunny holidays are never far away in that London home. (See Photo 4 right) Another house also with an unavoidable heating system “box” now has a library of favourite and desired works, some with punning titles As well as many personal artefacts from the family and their travels.

“For me it’s a life mission. I’m passionate about changing people’s perception of architectural space. A mural isn’t just an over-sized picture on a wall. It’s a portal to another dimension.”

“Nine years ago in an attempt to help popularise the genre,” he says, “some like-minds and I sat in a London café and put a plan together to actively get ourselves on TV. We wanted to get the words “trompe l’oeil” spoken on national television.” They succeeded. Among other things, they have been on Britain’s ITV1’s “60-minute Makeover” (regularly repeated) and BBC1’s “DIY SOS”.

Too many people associate the word ‘mural’ with vaguely Italianate, poorly executed, landscapes in restaurants, or wall paintings that have outlived their social or political relevance. What I try to do is something completely different.

Though inspired by many influences from many times (including Louis Boilly, Graham Rust, John Pugh, Richard Haas, Pere Borell del Caso, various Italian Renaissance artists, and all those clever 17th century Dutch painters), for Gordon, it is not just about making an interesting picture, but about giving a greater quality of life and having fun.

You can find out more about Gordon Collett on his website www.muralartist.co.uk. 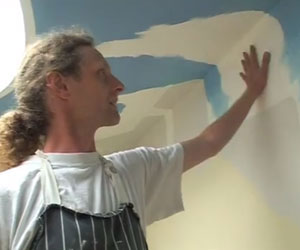 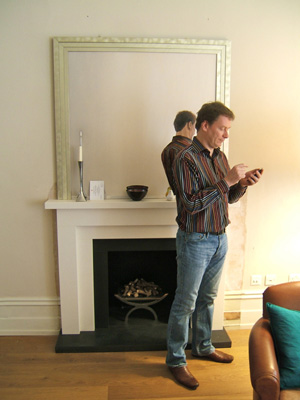 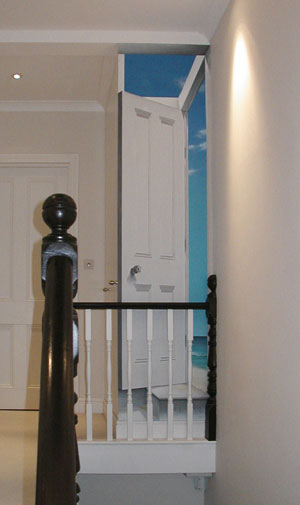 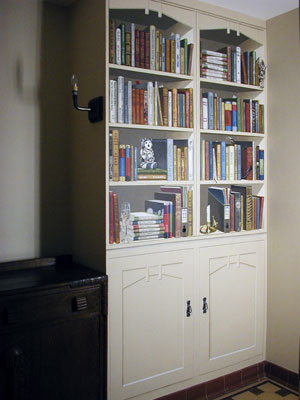