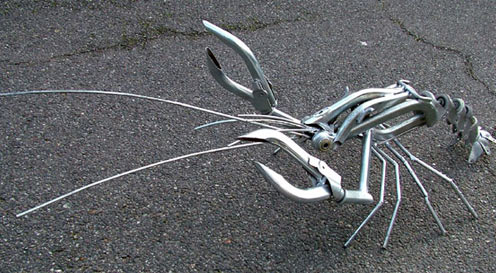 On being cool for taking on the uncool

Elrington’s creatures fit into this category

They create this uneasy realisation, which in turn demands examination as to why they are so likeable. Either way, the result does not pretend. It simply is, and thus there is an inbuilt guarantee of it never showing up in a biennale. A real shame for biennales if you ask us — but you don’t, because you’ve already been told.

Instead you could find many people who would say that this resides smack bang on the border between art and craft. Everyone is entitled to their opinion, be it the stale and schooled ilk or not. However, even if it was ‘art on the border’, it is much needed in order to define who we are. These days some of the most intriguing and talked about objects have critics argue the toss whether they are design objects or a pieces of art. An altogther healthy debate for our society, no doubt.

Debate aside, Jeff Koons continously uses a soundbite we could adopt “Art is about acceptance – acceptance of others and acceptance of ourselves”. That even if it his calm and erudite slippery slush you would suspect is designed as a defence mechanism — the sort of stuff you dish journalists so that they can embrace his art without being too awkward.

Ptolemy Elrington works with recycled materials. There are a number of other artists who cleverly source equal part material and inspiration that way. E.g. Jason Mercier, or Brian Dettmer. It is one of those endearing things that Elrington’s work shares with Arte Povera as well. To begin with the artists found these abandoned hub caps by the roadside and began to create nifty sculptures from them.

To collect enough hub caps to support his habit and to keep up on the orders, he must frequent the local junk yard these days – not least because he increasingly uses other recycled scrap materials. With this noble quest of recycling, you would develop a clear idea of what Volkswagen hub cap would create the best eye for a fish, or the Citroën plastic would be the more pliable for a certain body shape.

Elrington’s subjects are animals, though it is worth stressing that he covers other motifs as well. E.g he created a striking sculpture of Jonathan Edwards, the athlete consisting entirely of parts from a scrapped train.

But on balance there is a full early body of work dedicated to fish made out of plastic hub caps flung off careless motorists. But perhaps more on fish later, because right now it is a red herring worth frying. The guy is clearly getting better all the time. Recently he has worked more with the mesh wiring from discarded shopping trolleys, and metal in general.In so doing he has created insects, reptiles and birds on a much larger scale.

At worst it is downright tacky and at best sentimental. However, in every age you find a rare breed of artist who somehow manages to do better than that.

Here are are two well-known examples. On one side of the scale Picasso’s father painted great pigeons, and George Stubbs dedicated much of his life to painting horses as evident in e.g. the painting Whistlejacket at the National Gallery in London. On the opposite side of the scale, Chris Galligan paints pet portraits for equally wealthy and lonely people, but somehow never portrays the pets of homeless people.

When the margin of error is that great in this arena, it is perhaps the very reason western art has turned its back on representation of animals in art. As a type of figurative art, some can clearly celebrate the animal and breathe life into it. But here is another minus in the equation:

The prejudice saying that you can’t project much conceptual meaning into it, unless it is a frozen chicken as you will soon discover. Animal art is just way too innocent in nature – even if it is honest.

The old sentimental one again

The sentimentality of portraying animals is really an import that sits uncomfortably within a few things we would like to close our eyes to:
1) we have developed a culture obsessed with pets, and
2) we are engaging in industrial scale murder on other animals without seeing the irony in the whole set up.

Jeffrey Vallance bought a frozen chicken in the supermarket, and with that a full and costly burial service at the local pet cemetery. In the process he documented it all in the book and video ‘Blinky, the Friendly Hen’. Clearly a stroke of lampooning genius that helps us laugh at ourselves—and others. It goes to show that even a fart can be a breath of fresh air in the right context.

More about the artist and his art

Born in 1965, Ptolemy Elrington lives and works in Brighton. Since studying to degree level in art and design he has been working as a sculptor for twelve years and have created commissioned work for R.S.P.B., The Environment Agency, Thames Barrier, Ronseal, Kenwood and Essex County Council.

The work of the British artist has been shown in numerous art venues in London and exhibited in Ireland, Greece and Spain. Forthcoming work includes scrap metal work promoting recycling for a company in London, numerous private commissions, and displays in London and Barcelona. 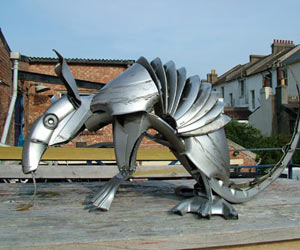 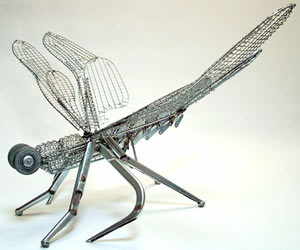 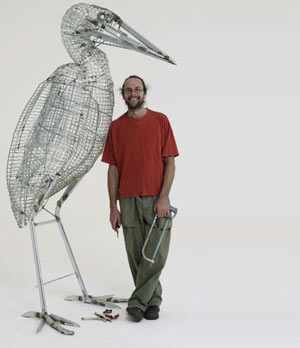 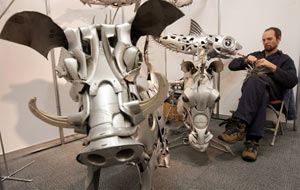