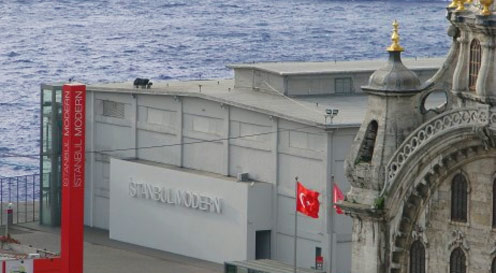 one of the friendlier faces of modern art

Located by the shores of Bosphorus, in the Tophane region of Istanbul and near the Mimar Sinan Academy of Fine Arts, the Istanbul Modern is a welcome break from the general hustle and bustle of this history-drenched city. With a unique view of the world’s narrowest straits used for international navigation connecting the Black Sea with the Sea of Marmara and described by The New York Times as “the changing face of Turkey”, the museum makes a good starting point for anyone who wants to see contrasting representations of the cultural dynamics between east and west, as well as unique exhibitions showcasing modern and contemporary Turkish artists with international reputations.

the changing face of Turkey

Although there are other contemporary venues such as the Pera Museum, the Sakıp Sabancı Museum (SSM) and the İstanbul Archaeological Museum, the ambition to bring purely contemporary art into the forefront of the cultural heart of the historic city of Istanbul goes back to late 1980s, when Eczacɩbaşɩ, a prominent Turkish industrial group, and the Istanbul Art And Culture Foundations actively searched for a suitable venue for almost over a decade. After years of negotiations and failed attempts to build at the Feshane, a former 19th century textile manufacturing plant on the Golden Horn, finally in 2003 the main venue for the 8th Istanbul Biennial, the fourth warehouse on the Galata pier, was nominated as the potential venue and accepted by the authorities. The warehouse conversion was undertaken by Tabanlioglu Architects and its re-purposed doors were opened to the visiting public on 11th December 2004. The result is a 8,000m2 exhibition space spread over two floors. The permanent collection is held on the Upper Floor Galleries and the more spacious Lower Floor Gallery is used for temporary exhibitions including retrospectives.

With the dual mission of fostering appreciation towards and stimulating active engagement in the arts, the museum currently provides a full events programme for various interest groups and also actively supports educational programme at surrounding schools.

The Museum also has a permanent library with state of the art facilities which is open to the public. Greeting visitors with Richard Wentworth’s ‘false ceiling’ installation, the Library provides unique support to visitors through its publications specific to the collection of the Museum. Through its 8,000 books and numerous periodicals, it provides a point of information on Turkish art and history, current exhibitions, art theory and major art movements, multimedia including photography, curating and exhibition studies.

Most recently the European Museum Forum (EMF) acknowledged the work of Istanbul Modern with a “Special Prize” for its “expertise in its perception of museology, the innovative outlook it has, and the importance it attaches to visitors”. According to the Museum’s Chief Curator, one of the main aims of the Museum is to increase the number of museum-goers in Turkey and ‘to reach out to the broader segments of society’. Visitor figures from 2011 show numbers reaching close to 700,000.

Amidst the success, the criticism often hurled at the museum is that it is far less international than their counterparts in e.g. New York, London or Paris according to the Art Newspaper. If that is the case, maybe it is not a bad thing. In an increasingly globalised world we so desperately seek a sense of authenticity. Every art museum in the World must have one Míro, one Picasso and one doodle of Klee, and yes that is all good, but might not provide a you with a particularly unique art experience.

The international advisory board for Istanbul Modern includes the Director of MoMA, Glenn D. Lowry, the Director of the Centre Pompidou, Alfred Pacquement, Direkcor of Moderna Musset, Daniel Birnbaum, and the Director of Schirn Kunsthall and Chief Curator of Tate Modern, Sheena Wagstaff.

The gallery also has a gift shop and café/restaurant where visitors can enjoy views across to Asia and the dramatic maritime traffic of the Bosphorus.

The Collection at Istanbul Modern

In the spring of 2012, the Museum Boijmans Van Beuningen exhibited a selection of paintings, video art and installation works from 14 prominent Turkish artists in the Museum’s collection, including İnci Eviner (1956), Taner Ceylan (1967) and Sarkis.

Adults: 12 TL.
Students, groups of over 20 and seniors (65 and older): 6 TL.
Groups (more than 10 people: 10 TL.
Museum members, children under 12, visitors with disabilities: Free.
Free admission on Thursdays for all.

Film screenings at the Istanbul Modern cinema are included in the admission price.

All days except Mondays, January 1 or on the first day of religious holidays.

Past exhibition: Dream and Reality - Modern and Contemporary Women Artists from Turkey