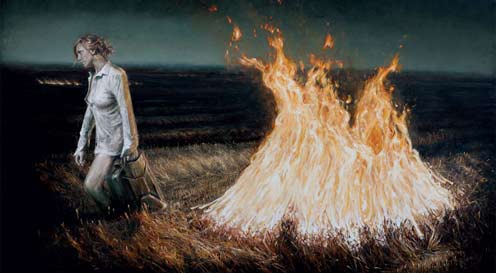 with warts and all

The 39 years old Danish artist Jacob Rantzau lives and works in Kattrup, which is so far out that the world has been extended with plasterboard. Being a flegmatic type, Jacob’s temperament is that of creating coherent series of work. I.e the kind which is a direct result of thoughts having ruminated in his skull for an extended period whilst drinking the odd cup of coffee. It is an incubation process at a loss for better words.

Rantzau has produced a good body of work so far. In more recent years, his art has explored love, though probably not in the way you might think. The problem with love is that it can go hand in hand with a host of other feelings. Consider here ambivalence, anxiety and despair — perhaps even envy. If not, it can be the discomforting male realisation of being secluded from a symbiotic mother-child relationship. It takes courage to own up to it, but it takes some nerve to commit it to canvas.

Jacob obviously has both, and the painting became part of a group of works exhibited under the name of ‘You can’t hold back spring’. It aptly borrowed a song title by Tom Waits alluding to very same dynamics of love.

In Denmark I Am [was] Born (‘I Danmark er jeg født’) is the title of a later series of works, which is visually represented on this page, and which is now all acquired by collectors. The phrase is commonly known in Denmark and happens to be words from a feel-good hymn by HC Andersen. The latter is probably a testament to the fact that Andersen carried a heavy cargo of gratefulness without being overly sentimental on the job. It goes some way to explain the perennial interest for the phrase.

As goes for Jacob, he is simply coming to terms with his sense of feeling rooted and a product of his home turf. Call it ‘love’ if you will. It is definitely the kind of unconditional sort that makes us accept farts, wrinkles, warts and all. There’s always a glimmer of hope in this love, and without pessimistic moralising, the artist reflects some uneasy societal developments. For instance, he subtly hints at rising levels of narcissism, increasing work demands to earn more, depletion of resources; erosion of social interconnectedness. In addition, he takes on the mock modesty so nauseatingly ingrained in the national character that it has an official name: the ‘Jante Law’.

Hence, his take on the Danes is neither an expression of the kind of nationalism that pokes its ugly head up at times – nor is it an overtly political statement. However, apolitical the art might be, one day we might thank Jacob for claiming the words back from a political party. The said party is actively (ab)using the very same words for a less inclusive idea of the Danish nation. Simply, the phrase turned out to be the perfect umbrella term for creating eight interrelated paintings. So Jacob adopted it, while thinking ‘why should a party get away with monopolising it?’

It becomes all the more evident when you notice the constituent parts of his work and allow them to sink in. Being perfectly fine with the notion of people experiencing the work on their own terms, Jacob offered his motivation for one of his paintings. 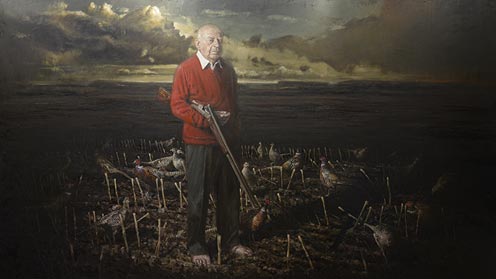 Essentially, the piece is about affluence combined with existential dilemma of choice – or too much of either to be precise. After decades of having limitations, the elderly man is completely at odds with what to make of it all, and he is experiencing the kind of affluenza affecting Danes in the autumn of their lives.

The dramatic sky appears foreboding. The man is standing gazing at us. He has bare feet on harvested farmland and holds a double-barrelled riffle. In turn, the riffle is open, but is it loaded or isn’t it? We decide it is not important. The fact that it is open helps establish that he is missing an opportunity or two had he been a true hunter. The man is isolated, except for some pheasants by his feet. In turn the pheasants appear to be going about their business oblivious to his presence.

It is hardly a coincidence. Our age offers such opulence that affluent people pay to shoot pheasants. But the story gets better when you hear the pheasants are bred and fed in captivity. Then the fowl is released into the wild so as to provide hunters with a surrogate feeling of hunting. Ironically, the fowl is so tame that it would approach the hunter in the hope of being fed rather than flee.

Rantzau primarily paints in oil and on several life-size canvasses at the same time. The process is ‘on and off’, and the works of art are the direct results of an extended labour of love. However, he is also fond of breaking away from this. Then he occasionally finds a scrap piece of paper and carry on in pencils or pastels.

The artist has been represented by Galerie Wolfsen in Aalborg for some years. The Gallery is slowly but surely becoming one of the leading galleries in Scandinavia with a roaster of talented and well-curated artists. The Gallery is not only tuned into the zeitgeist, it also displays a cunning knack for spotting the timeless whilst adopting a long-term perspective. You can find out more by visiting their website. 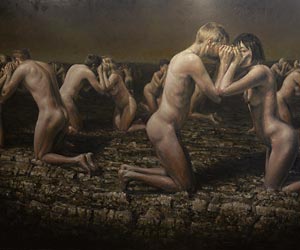 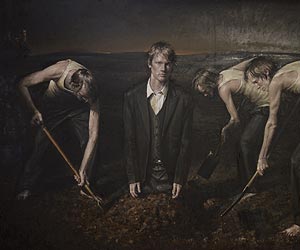 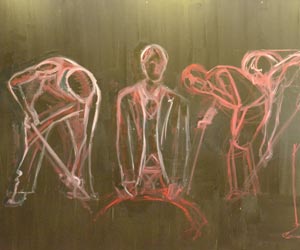 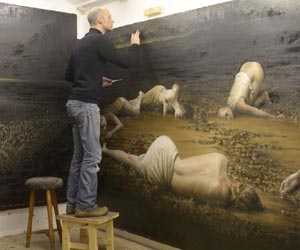