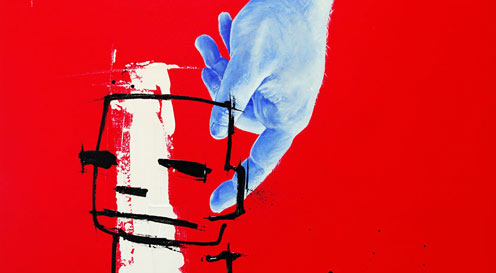 i am a poet and i did not know it

Having first trained as a graphic designer, the Dutch artist Jan-Hein Arens is a difficult one to pigeon-hole. It instantly singles him out as a collector’s dream and an art critic’s nightmare.

After having surrendered his soul to art, the Unica himself is a 21st century take on Dada, CoBrA and Pop art combined. His works are amalgamations of various techniques, which ought not work together — and yet they do. Take for instance the controlled duo-tone and hyper-realistic brush work as contrasted by swift and bold lines, dripping and punk calligraphy.

To sum up the artists work, it is that of creating visual puns upon the human condition. But more than that, Arens tackles quite profound stuff with a dry sense of humour. You soon discover witty and contrasting juxtapositions. You also find evidence of an appreciation for short-hand scripples which help marinate the work to its full flavour.

An example of that is the piece “now you know” (cf picture gallery to the right). The work mocks the type of trivia which tells us that oranges create more electricity than human beings. At the same token, it remains uncertain whether oranges are superior to us.

I sometimes just pick a word out of a dictionary, and try to work with that.

Arens comments: “Generally, I first come up with a line of text, which will, in most cases, be part of the artwork. Then I come up with an image that contradicts or strengthens the words so the sum of the two (words and image) form something completely different”

“What I’m doing is basically playing with common feelings and certainties. By combining everyday things that everyone knows and trusts, like love, parents, angels, food etcetera the output is often odd or wrong.”

Jan-Hein Arens has accidentally exhibited in India at a show called ‘World Art’ at the Ahuja museum for Arts. He simply didn’t know his art was on display until after the event. However, he is behind more deliberate acts such as having mounted a group exhibition show in Toronto called ‘Square Foot Show’ with art that – yes you guessed it – measured one by one foot. Arens has also participated in Carre d’Artistes, Aix-en-Provence. On his home turf, he was behind a solo show at Reinart Gallery, and teamed up with Sjer Jacobs for a double act at Lambert Gallery.

Currently, the artist is represented by LivingArt Gallery, Sous Terre Gallery and the Puurkunst Gallery. For more information, you can also visit his own website. 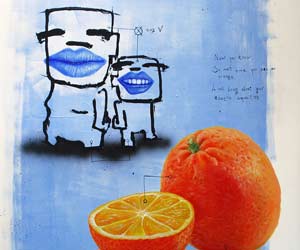 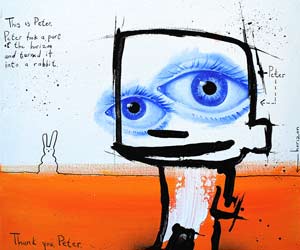