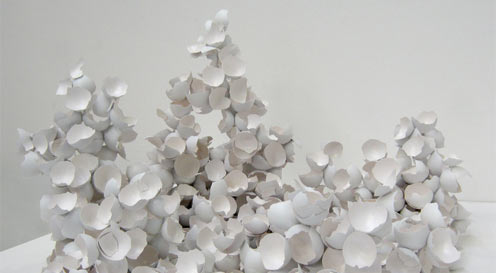 Thurso in Caithness is so far North in Scotland, that compass needles ought to spin like clock arms, and the world should be extended with sand and seaweed only. Amongst other things, the place is remarkable for being the only place in the world where it rains at sub-zero temperatures. What’s more it pours in more horizontally than vertically. Aside from that, Thurso it is the home of artist Jana Emburey. Originating from Slovakia, the artist was lured there to work with art, and not to enjoy the culinary delights of deep-fried Mars bars, oat cakes and haggis.

Emburey has already produced a good body of work in various media. Much of her work has been created in the mental frame work of our temporal environment. Or put in another way, much of her eouvre explores the notion of time perceptions. It can all sound fluffy at face value, but you soon notice the strong presence of time in the work yourself, and it all begins to make sense.

Apparent is for instance the flow of working as a child, and you’re so preoccupied that time disappears somehow. Time can also be an exact moment in childhood being encapsulated. E.g. a childhood memory is cast inside latex rubber. And why not tap into this important source to who we are? Today we are thankful to Marc Chagall, who spent much of his life in Paris using scraps of memories and characters from Vitebsk, the village where he grew up. Before you protest, floating goats and violins are standard issue flying objects in a Jewish boy’s fantasy world in Belarus — Honestly.

The sculptures frequently resemble vessels, empty carriers that could have witnessed a development of life of some sort

The sculptures are strong artistic contributions. They are conceptualised in a spare room doubling up as a studio, and the more messy stuff is whipped up in the garage. As for her work in general, you sense an undercurrent of dry wit as evident in titles such as ‘My 9 Months of Drinking Tea’. But there is also a sense of fun in the choice of materials, be they found objects or not.

You can’t make omelette without breaking a few eggs

Being made up of egg shells, Emburey’s sculpture ‘All is One’ could very well be the by-product of a few omelettes — or is it the other way round? It doesn’t matter you soon decide, but you’re tempted to think of it as an art restorer’s wet dream.

However, despite the artist’s initial worries over its relative longevity, the thing has turned out to be a tough cookie, indeed. To the artist’s own surprise, the work has been in transit between its home and an exhibition venue in London without suffering. It would appear that a simple truth about human beings also applies to egg shells. A single entity is fragile on its own but strong when joined by many more.

To collect or not to collect

When you discover works of art, it is easy to end up in some accolade overdrive over certain artists. But then, more often than not, you subsequently find evidence of others being equally fond of the art. Not that it should ever have a say in your own opinion, of course. Yet, it can’t help but tell art collectors that their own gut feelings are not completely derailed. As regards Jana Emburey’s art, that is exactly how it is. Emburey has completed a BA Hons Visual Art with a first class honours degree. She is featured in one of Saatchi Online Homepage Collections, and currently there is a feature in Harper’s Bazaar magazine about her work and another is due in October. 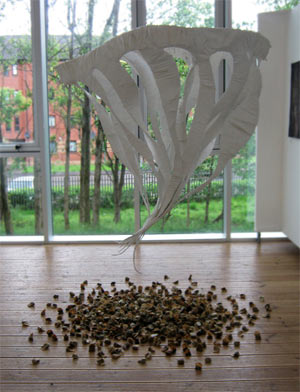 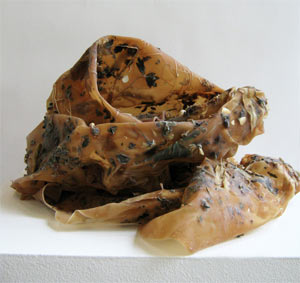