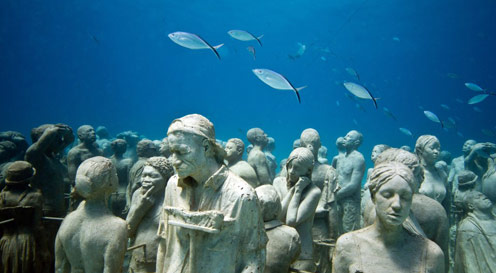 the sculptor and the ocean

As a fine art sculptor you could settle for creating structures that said something poetic or profound by their shape and presence alone. But that is not enough for the sculptor, underwater naturalist and photographer Jason Taylor. To him the context and environment is as important to him as the work of arts themselves. Among his many achievements is the world’s first underwater sculpture park off the coastline of Grenada, West Indies. ‘Completed’ in 2006, it is regarded one of the Top 25 Wonders of the World by National Geographic. Another highlight is MUSA (Museo Subacuatico de Arte), containing over 500 of his sculptural works submerged off the coast of Cancun, Mexico. Forbes rightly waxes lyrical about the work, and calls it one of the world’s unique travel destinations.

According to the artist these permanent public works have a functional aspect to them. They facilitate positive interactions between people and fragile underwater habitats, while at the same time relieving pressure on natural resources. In some instances they are literally an active part of marine conservation encouraging coral reeves to form. At other times, they seek to encourage environmental awareness by bringing the art into the very thing we keep forgetting the beauty of: the Sea.

Jason deCaires Taylor is currently making waves after the completion of project Ocean Atlas in October 2014. He has just made the western coastline at Nassau, Bahamas even more remarkable than it already was. “Ocean Atlas” harks back to the Ancient Greek sculpture of Titan Atlas, who holds the heavens. However, in Taylor´s take on this, [Ocean] Atlas depicts a young Bahamian girl sustaining the ceiling of the ocean.

To date it is the largest single sculpture ever to be deployed underwater. As such it reaches from the sea floor and five meters up to the surface weighing more than sixty tonnes. The Sculpture is painstakingly and precisely assembled underwater in sections.

What’s rather beautiful about this and the rest of his artistic production, is an affinity between the object and its environment. Nature itself is part of the integration and matures the art in situ.

To encourage coral inhabitation the artist uses a mix of marine grade cement, sand and micro-silica to produce a pH neutral concrete which is reinforced with fibreglass rebar. In addition, some sculptures contain ceramic tiles and glass making them consist of 95% of inert materials to watch out for the environmental footprint. As a starting point, all the sculptures are based on living people, who – depending on scale – can be life casted.

What is really profound about the art is their metamorphosis. From the outset there is the interaction between artist and nature. It is all quite ephemeral, and for every visit to his sites, it is a unique experience to see how nature takes over, interacts – and often enough – inhabits his art.

Jason deCaires Taylor was born in 1974 and grew up in Europe and Asia. A significant inspiration to his current work happens to be his childhood interest of diving and exploring the coral reefs of Malaysia. In 1998 the artist graduated with a BA (hons) Fine art specialising in sculpture from Camberwell College of Arts Institute of London. Taylor is a bit of nomad, and currently he has set up studio in Lanzarote, Canary Islands. You can find more information about his work by visiting his website. 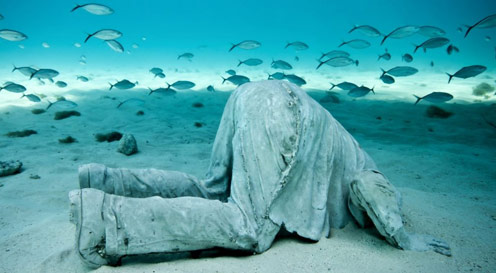 Image credit
All images by courtesy of the artist Jason deCaires Taylor, © all rights reserved. 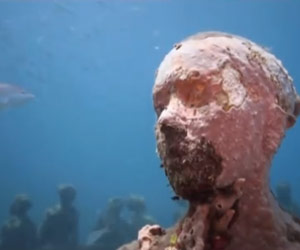 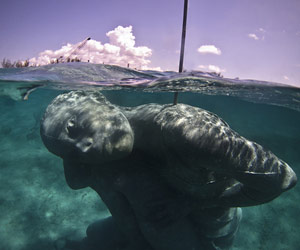 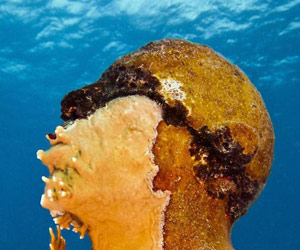