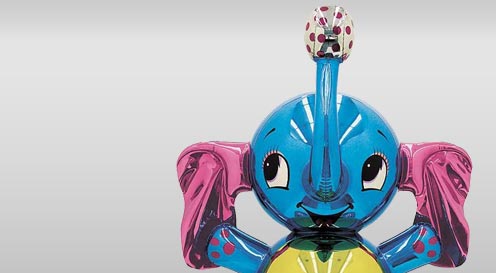 Jeff Koons works across a wide spectrum of media be they Installations, sculptures or oil paintings or photo-montage prints. Bombarded with the superficiality of our present visual culture Koons in a way reflects culture back to us highly amplified. In these neo-pop representations, you never really know whether the biggest joke is on us, and that’s the beauty of experiencing his art. He can do everything from the sublime to using a broad palette of deliberately tacky elements such as sentimental poodle dogs, flowers, curlicue ornamentation, clashing colours, balloons and inflatables.

In his later years, koons has had the propensity to focus on really glossy things, which in turn borrow a lot from our consumer culture. Highly crafted Figurines and glazed in this kitsch fashion of bad taste. You just know your grandmother had this friend who loaded the mantelpiece and windowsills densely with this stuff. The only difference being that this friend of gran’ bought it for £0.5 a kilo in car boot sales. The, at the time, highly controversial figurine of Michael Jackson and his monkey or simply his love life with former wife Ilona manifested itself in a series of artworks in various materials.

The inflatables are made of high chromium stainless steel with transparent colour coating for various sensible reasons such as the longevity and finish. Even with the best will in the world, blow up things lose air and disintegrate sooner or later.

But koons is more than faking something being held up by air alone. Koons has pursued art in a certain progression or clearly defined periods of specific interests. There was the period of classical conceptual stuff. This included works such as aqualung and basket balls floating in the middle of water thanks to input from Nobel-prize winner Richard Feynmann. This equilibrium series has some parallel to concept art and Duchamp’s ready-mades.

However, he does not speak too much about this routine of letting art deliberately refer to something, which in turn cleverly referred to something else that someone found intelligent in Wallpaper magazine. Then there was the made in heaven period dealing with sexuality, then the ‘luxury and degradation which partly took slick advertising layouts techniques into the art. in between this he has worked temporary installations such as his giant dog clad in real growing flowers.

Koons has adopted the notion of the art factory whole-heartedly

Today the artist uses a factory style approach with 90 assistants and specialist supplier workshops to create his art. This is no more ‘Warholl’, than it is a practice used for centuries. Rembrandt, and many others used assistants to keep up with popular demand and offer welcome training to individuals. That the ‘grand vision’ can’t always belong solely to artist, but may use input from an assistant, is a futile argument. Who cares? The result might actually be better for synergies not found in mono-culture petri dishes.

What really goes on in the factory in Chelsea, New York? beyond hatching the ideas behind the art, there is a real meticulous and continuous research into materials. There is quality assurance on suppliers such as those who understand how to polish up metal, work in glass or marble. On top of this there is clearly a carefully orchestrated marketing machine as if this was a real company. Jeff himself is softly spoken and wears perfectly fitted suits. If we subscribe to an ideology, we can think of it all what we like. To cling to a false sense of security, we can squeese him into popular notions of artists only being real artists of merit if they are financially struggling missfits. In short, we could argue with success, but we would be wrong.

The work on canvas undergoes an interesting conception. It is first mocked up and refined on a computer, then plotted out in real scale in various colour zones as a blue print or position map. Then oil paint mixes are blended up for each zone, and applied by someone almost as if painting by numbers. One could argue that you could just as well have whisked the photoshop or illustrator file down the nearest copy shop to have plotted out in high resolution in billboard size in uh…something like 2 hours. But that is not the adopted approach, and Jeffs natural talent as a commodity broker might – at least in part – come into play here, because the artifact might actually fetch a higher price as a painted canvas. 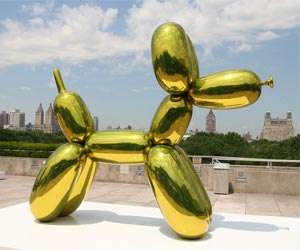 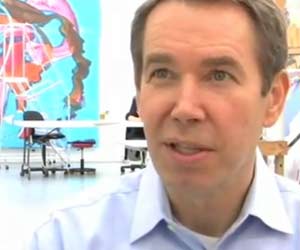 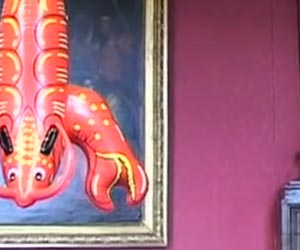