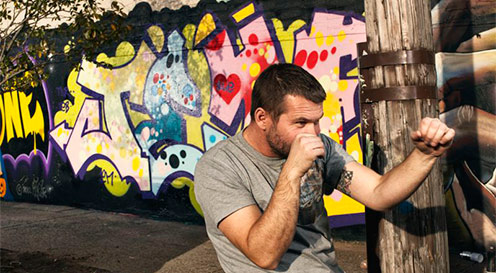 listen to your heart and shun fads

With a collection comprising of 2000+ works, Jens-Peter Brask is one of the most prolific art collectors in Scandinavia who dares to take on emerging talent before everyone else. The figure itself says diddly squat to many. But it is about the number of pieces any self-respecting art museum ought to acquire in order to be taken seriously.

The collection includes significant Scandinavian and American art. Within that lot, there is everything from skulls by Carlos Cons, to Julian Schnabel trying out a spraycan to Retna’s alien but equally arresting scribbles. The name dropping could continue with Martin Bigum, Christian Lemmerz, HuskMitNavn, Hessel & Mejlvang, Alexander Tovborg and Michael Kvium — but that is a red herring worth frying quickly lest we are here until midnight.

Today Brask has 23 years of art collecting under his belt. Except, the exact number of years is up for debate because Brask’s affinity with art began in his early teens. Then he was much drawn to counter-cultural art from New York. If you rewind your tape to that age of ‘later skater’, it happened to be art that the establishment regarded as beautiful acts of vandalism. Art attacks on concrete committed by juvenile delinquents all easily identifiable by their rainbow-coloured fingertips, jersey hoodies and sony walkmen.

Although the allegations would not hold up in court, there is at least circumstantial evidence of Brask himself tagging along as a graffiti artist in Roskilde in them days. For the uninitiated, the city of Roskilde is neither New York — nor is it Bristol, the Banksymanic epicentre of British flavoured street, stencil and angst. No, it is comparative to Ali G’s Staines in the UK, a comfortable middle-class ‘hood outside the capital for chilling out and hanging with mates.

In his late teens Brask worked his arse off as event organiser and nightclub owner. The dizzying speed of that rock-and-roll lifestyle was oddly contrasted with time off during the day.

Something of intellectual import had to enter the equation

Subsequently, he began to collect to fill that void. Fast forward a couple of decades, and Brask does the same essentially.

He supports his habit by running the restaurants Sommerhuset and Halvandet in Copenhagen; and time permitting, he travels and takes in as much art as he can muster. In addition, he has become the author of some book titles. One is Danish Grafitti 1984-2013 which also resulted in his curating of the legendary exhibition with the same title at Kunsten in Aalborg Denmark. Another is the recent book titled Brask Studio Visits.

We tracked him down to fill in some blanks for us.

How did it all begin for you, what was the first work of art you acquired, and why?

Brask: Upon seeing the Danish painter Michael Kvium at Gallery Susanne Ottesen in Copenhagen for the first time, I knew I had to own one of his works. So I was 20 years of age when I purchased my very first piece of art. Very quickly, I found it interesting to look at more art and bought works by the artists Christian Lemmerz, Martin Bigum plus some more by Kvium.

If you could travel back in time and start all over, what would you do differently?

Nothing really – I think everything happens for a reason. But there are always works of art that I wish that I had bought years ago.

Do you know what drives your passion for art, and if so what is it?

Art is so diverse – it can be breath-taking, challenging, unpredictable, repelling, offend you or push your boundaries. It can just draw you attention like nothing else could. Art really allows me to deal with something completely different than my everyday life as a restaurant owner. My passion for art is not only shared with my girlfriend but has also connected me with some amazingly creative and wonderful people who have since become close friends.

In your view, what is the biggest act of folly that a novice collector could commit?

That would be to jump on a fad – and those kinds of artists normally fizzle out once the novelty of their work has vanished. First of all, I would always recommend someone to buy with their own heart. Next, go and look at as much art as possible to establish your own personal style rather than blindly adopting the tastes and opinions of others.

Which type of art would you not touch with a barge-pole even if it was offered you for free?

My collection is very diverse with a preference for painting. But the type of art that is less interesting to me is performance art where the viewer has to interact.

What are the 3 most important ways for you to keep your finger on the pulse when it comes to art?

New York is my favorite destination and the place where the contemporary art scene is constantly moving and developing. I’m always very open and interested in meeting and seeing new art that has been recommended by my artist friends.

Secondly, I keep myself updated through gallery newsletters – this is a really simple way for everyone to keep abreast. Just sign up and follow a gallery. Alternatively, use Instagram – from my point of view, a unique app that makes it easy to follow artists, look up under hashtags and discover new art, galleries or museums. Finally, I visit art fairs. This is a great way of meeting and seeing galleries from around the world all gathered at one place.

When you are collecting art there are different ways of acquiring works. For Jens-Peter Brask the number one way of sourcing art, is to go out there and visit the artists, look at their works in situ. It has the advantage of spending time with the artists and getting behind what they are doing and, why they’re doing it. As a collector, Brask insists that the artist’s vision is very important and that even if the work itself must stand on its own and speak to you.

Image credits:
Top: photo of the collector
Right: snaps from the studio of artist Adam Helms
Both courtesy of Jens-Peter Brask © 2015 all rights reserved 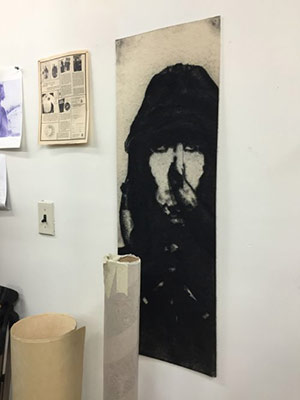 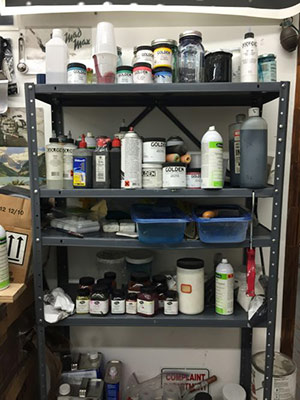 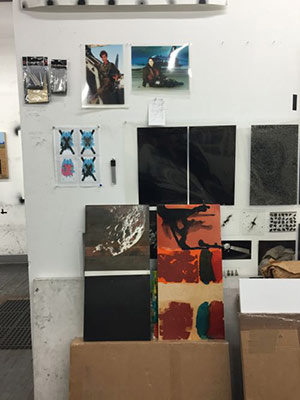