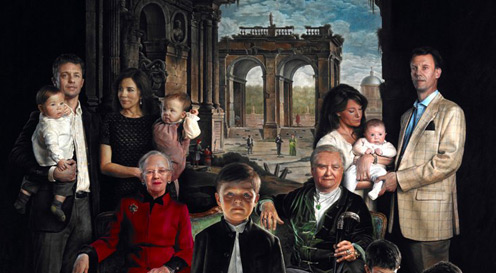 Recently, a large life-scale group portrait has been painted for the Danish Royal family, and titled Royal Family (Kongehuset). It is exactly what it says on the tin, and is now part of an ongoing public exhibition mounted at Amalienborg, Copenhagen.

On and off, the artist Thomas Kluge has worked on the piece for the past four years. It is one in a row of commissions for portrait of the royal family, and over time it has made Kluge a bit of a household Velasquez.

There is more to the actual work than meets the eye. Kluge’s painting is coded with props and symbolism central to the monarchy. In so doing it resonates with Tuxen’s last group portrait of the Danish Royal family as painted by Tuxen at Frendsborg Palace at the very same spot in the 1880s. Even the sofa doubles up in this post-modern acrylic take with appropriated Flemish painting techniques and Italian chiaroscuro.

The painting is a conversation piece more so than many other works from the artist. It goes some way to explain why it attracts a few comments about its serious nature without it ever being the return of the Addams Family.

Other times it takes 40+ years to become an overnight success. Whatever the point being made here, some days simply mean great leaps forward, and that applies to this work of art. It is a departure from previous work by Kluge for its uncanny brilliance in handling a subject with a mix of the loving and the somewhat sinister. It is a type of subtle equilibrium that is only achieved quite late in an artist’s career by the likes of Odd Nerum and Rembrandt.

What is clever about the piece is that it does not attempt to hide that it is a highly staged 21st century thing. In fact it appears to make a virtue out of what we all know. I.e. the fact that it is a composite. Hence, there are two light sources. The brightest from the right accentuates that it is lit with artificial lighting indoors. The larger theatrical backdrop with the italinate architecture and landscape has its own light, which throws you a little at first, thinking the whole thing is also backlit. It turns out to be painting from the Fredensborg collection, making it a painting within the painting.

Group portraits are notoriously difficult to turn into well-orchestrated compositions, and this one contains 14 individuals. But it has been solved exedingly well. Three persons are gazing directly out on you, i.e. the direct heirs to the throne. The others are sending you round from one person to another with their eyes.

The process of making of the royal group portrait

It can be hard enough to pin down a busy family, which has made Kluge rely heavily on sketches and photos in between the sittings. In between, a set of twins arrived and the composition had to be shuffled around. It is for the better, and the result ended up being much more focussed on the children. All the hard grafting has been documented in a book, which title roughly translates into The Return to Fredensborg and available through the publishing house Kle.art. 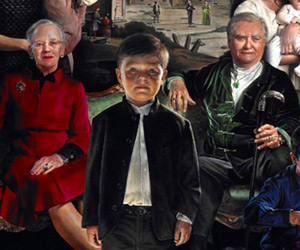 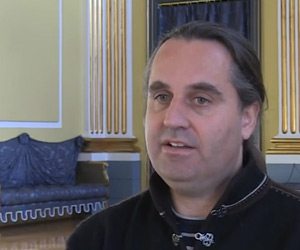 Practice your Danish: An Interview with Kluge