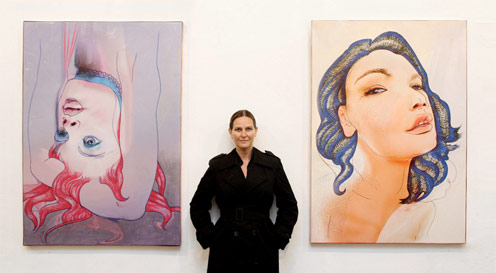 we are only the light we spread ourselves

The Dutch artist Lisa van Noorden is currently taking part in three art events. One at the Amsterdam Light Festival with work which – you’ve already guessed it – spreads light and joy. Another is an exhibition at the Van Loon Galleries and a third is an exhibition at the Grachtengalerie. She is best known for her large scale work out in public spaces. As a practice it goes under names such as autonome art and art applications, and involves thinking about how people interact with urban spaces. In the case of van Noorden, the work ranges from murals and panels to light installations.

Often enough her art takes us along a more narrative strand resulting in allegories or friezes. A talent and strength that has been difficult to ignore by many. As a result, the artist has been commissioned for her vision on a number of projects such as Jaarbeurs Utrecht, Rotterdam Art Centre, and RET the Tram and Rail transport company, who in turn commissioned panels to a metro station.

To the artist it is all gratifying and particularly when working in parallel with the architectural process to marry spatial structures and visual art to optimum effect. But it can be just as much fun when art is applied as an afterthought.

As an urban renewal project, imagination can go a long way to help transform the lives of local residents for the better. An Example of that is the mural project Human Nature, which was completed for a client Woonwijze who was confronted with two choices. Either to demolish some soulless 60s block of flats in Vught or give them a revamp that could make them pleasantly habitable and energy neutral. Van Noorden’s involvement became a 10 x 6 metre hand painted mural with aluminium to twingle a little in the dark. The focus was on the positive interplay between man and nature.

Another example is Horizon where the artist became a part of bringing art into an organisation, but also performed the role of storytelling for the company. I.e. not the brash perception engineering and propaganda that we’re all familiar with in the corporate world, but something a little more subtle or should we say honest? The story was vaguely to hint at the history of a company, the many facets, and to record the collective achievements of the staff.

More about the artist and her way of working

Based in Rotterdam, Lisa van Noorden trained to be an illustrator and fine artist, but decided to complete a 10 year stint as a designer after completing a second course.This time it was in computer graphics and multimedia design, and the return to education was fueled by a mix of curiosity and the realisation that the computer offered something that conventional easel art did not. In that period she continued working as an artist, but did not exhibit her art. However in 2003, she mounted her first gallery exhibition.

In this mixed vocabulary of the analogue and the digital, hand drawing is quite important. According to van Noorden, it is where it all begins and usually also where it ends. It is a very individual thing along with hatching the concept and maintaining its vision. However, as an artist she must sometimes rely quite heavily on the support of others whether it is strictly required or not. If e.g. you do light art installation in a public space, you are legally obliged to consult an electrician. Similarly large format panels require an entire rigging team to fasten things safely and so forth. To cut along story short, art in public space is teamwork par excellence requiring copious amounts of professionalism, stamina, management of client expectations, motivation of others, and logistics. Aside from being an organised team player, the rest of the work goes quite unnoticed though it consists of extended research into the choice of durable materials.

I hate when a brief states that everybody should be able to understand the work. People are not stupid.

As for the commission brief, there are good ones and bad ones. The good ones clearly identifies the resources. That is not just the funds, but more importantly the key decision makers and their availability throughout the project. Secondly, it adopts a helicopter perspective by stating a theme within its context; but is neither prescriptive about how it is to be executed nor does it straight-jacket the artist to include certain things. Thirdly there should be a certain boldness and daring, instead of dumbing everything down to the lowest common denominator. Inevitably some will always get it and others with a closed mind and an IQ below the floorboards will not. That, in simple terms, is the nature of art and why we need it so desperately.

We asked her what she would like to do more of in the future, to which she replied:

“I would like to meet a client who wants to work with me on an installation; a collection of colorful suspended works which together form a story about finding personal freedom.”

For that I need resources, funding and a good location; a large and high lobby or hallway for example. Another thing I would like to keep working on is to bring Volte (Interactive light artwork for the Amsterdam Light Festival) to other locations and to use it’s full potential. A third thing that’s on my agenda is to create a team and engage in projects that encourage the use of art and creativity in companies.”

Image credits:
All photos by the courtesy of the artist © Lisa van Noorden, all rights reserved, with the exception of the Horizon photos attributed to photographer Max Dereta. 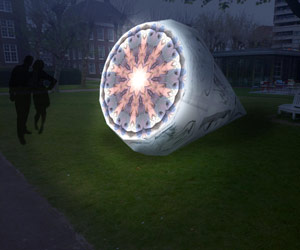 Art at the Amsterdam Light Festival 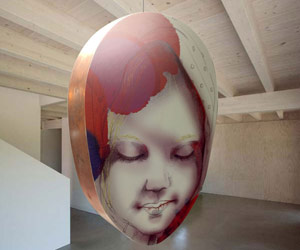 Dreaming one of several suspended sculptures 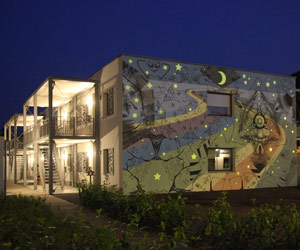 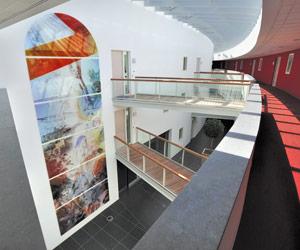 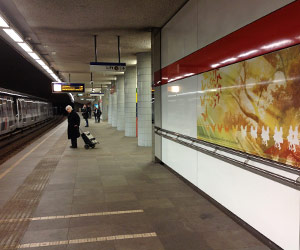 Art at a RET Metro Station