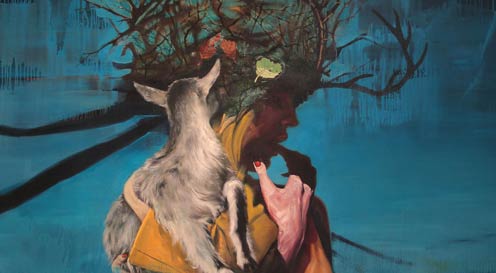 the enigmatic puzzle from a place called riddle

The emigré artist Lorella Paleni creates art by orchestrating dense image fragments as if they were part of a musical composition. Her work begins with extensive research followed by a collation of image material. At that point the result is destructed and reconstructed on canvas. By her own admission, half of the work is planned. The rest happens by chance, and this combination might go some way to explain the magnetism inherent in her work.

You can be quite mesmerised by the sensual bombardment in Paleni’s art. Despite the fact that her work is titled, there is no narrative, and in a way it is an insult to suggest that art must have one to justify itself. It is clearly easier for people to accept purely abstract expressions on those terms, and less so when some recognisable elements appear within the art. However, if you do insist on decoding something, you will only end up pursuing multi-linear strands of sense-making. It is an experience that is not that dissimilar to reading Finnegans Wake by James Joyce.

Either way meaning is not something an artist can control. It is projected into art by the beholder or negotiated with society at large. If you decide to scrap meaning, you can still enjoy something, and as the artist puts it:

The [idea] of cleaning the image from the narrative expedient is to go directly to the core of it, to make the painting be the event itself — not a representation of it

Art and living in a flux

Being comfortable with ambiguity and uncertainty creates opportunities. Having received her formal academy education in Venice, she moved on to study and work in New York. Recently, she has taken up residence in Berlin, and is making herself ready for her first solo show at HB55 Kunstfabrik.

Migration has proven to be a great catalyst to Paleni, and it has sparked her creativity for reasons unbeknowst to her. When asked, the artist is not even sure she is a painter per se. That she has created impressive oil paintings is simply down to her feeling compelled to do so. If you will, compare it with dogs scratching themselves whenever they feel an itch.

Whilst keeping her own unique style, Lorella Paleni constantly stumples upon inspiration. The number of influences she digs is broad indeed. In her teens she was in awe of Carravagio’s ability to manipulate light. She has also been quite moved by Francis Bacon – if not by his paintings – then by his insightful interviews.

In addition, she can spot a good colleague when she sees one. For instance, she respects the art of New Leipzig School artist Matthias Weischer.

The Italian export has already made a good name for herself in art, and not least because of a strong work ethics. Half way through reading her 4-page resumé you realise that you are short of breath from keeping up with her. Find out more about Lorella Paleni by visiting her own website. 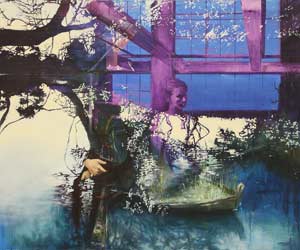 Up here - losing it 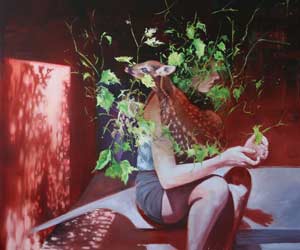