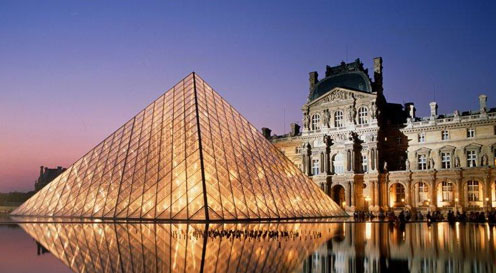 Louvre the place to visit

Housed in the palace ‘Palais du Louvre’, Musée du Louvre is situated in the heart of Paris, a stone throw from the Seine River. The collection is incredibly broad and comprises of art from several civilisations spanning everything from antiquity and up until the 19th Century. Louvre additionally borrows and exchanges art with other collections of art around the world and hosts a series of temporary exhibitions including some more contemporary art. In the same vein as the Tate family of sites, Louvre has branched out and reinvented itself through popular demand. One being the Louvre Lens in the Northern French town of Lens, and the other Louvre Abu Dhabi in — well you guessed where.

As for the main site, there’s a downside to being attractive. In summary, The Louvre can be reached by the Palais Royal – Musée du Louvre Métro or the Louvre-Rivoli stations.
At certain times in the day, the main entrance at ground level is best characterised as Queueing Hell. The queuing runs far beyond the glass pyramid right to the new entrance in the main court, the Cour Napoléon outside Palais Royal.

Good news is that it can be avoided altogether. Two phases of modernisation under the Mitterand presidency appears to have solved the infrastructure problems so beautifully that the Louvre proudly recorded a doubling of its annual number of visitors in 2002. Simply, enter via the metro underground entry under the large (and inverted) pyramid, and ticket machines also ensure you can buy tickets quickly and conveniently using a credit card. You then also have relatively quick access to the main 4 wings with the ‘Scully wing’ being the most visited for a reason that will soon reveal itself.

There are two really big attractions at Louvre. Those, however good, are in a self-perpetuating loop of being famous for being famous. The one is the Mona Lisa, and the other the Venus de Milo. 5 million visitors a year stand in front of the Mona Lisa. Albeit a matter of individual taste, logically there are several other pieces of art of equal artistic merit to find at the Louvre. So don’t miss out on those. Actually there’s at least one more. A segment of the population, who would probably not have sought out Louvre, now find the place fascinating. That is ultimately a good thing, and it all comes down to the filmic take of Dan Brown’s fictional novel ‘the Da Vinci Code’, which incidentally took place at the Louvre.

But there’s another reason why some corridors remain more visited than others. Simply, you would have to be selective if you only have one day to hit Louvre. What becomes apparent when you are at Louvre is the sheer scale of it. Without a doubt, Musée du Louvre is one of the World’s largest museums comprising of 35,000 works of art and 380,000 objects spread across 652,300 square feet and cared for by over 2000 members of staff. The Museum is thematically divided up in eight different departments: Oriental Antiquities, Egyptian Antiquities, Greek, Etruscan and Roman antiquities, Islamic arts, Sculpture, Art Objects, Paintings, and Graphic Arts.

Like at the British Museum, you could camp in a tent in there for a week and still not feel you’ve seen everything. Of course, you’re not allowed to put up your tent or squeeze in a caravan for that matter, but some manage to book a room there. You are also permitted to take photographs in designated areas as long as you do not use a flashlight. You’re can also sit in the seating provided, though in some of the more overrun areas, a place to rest your legs proves a scarce resource.

The Louvre in the past

Behind the beautiful Renaissance exterior and modernistic glass pyramid, the museum has a mixed pedigree with a colourful history. In the 12th Century, the site was first a castle with dungeons for political prisoners of Philip II to sit and rut into oblivion. The remnants are still visible in the basement of Louvre. Then Louvre was a spill-over storage facility of bric-and-brac from the Versailles Palace, though that too contained much art such as a royal sculpture collection from the antiquity. In 1692, Louvre became the home of the French equivalent to the Royal Academy of Art, soon followed by the Salon’s, which were established and censored art exhibitions of greater scale. The academy stayed 100 years at Louvre right up to one of the two French revolutions. The National Assembly then decided that Louvre should adopt its present role of being a museum of all the national and international art treasures of noteworthy standing, and collected by the Republic of France.

Art wants to be shared

Louvre is also known for hosting good lectures and symposia on all things art related. On youtube Louvre has uploaded an impressive video library of its art under the title of ‘Les Films du Musee du Louvre. It is broadcast quality, professionally narrated in French, and is commented by Louvre conservation experts and art historians.

One tidbit about du Louvre tickets

Guided tours can be booked in French, English and Spanish

Réunion des Musées Nationaux operate Gift shops at the Louvre, one of which is before the main entrance

You are allowed to take pictures inside under certain conditions

You can get to the Louvre by bus, metro, train, taxi and by car 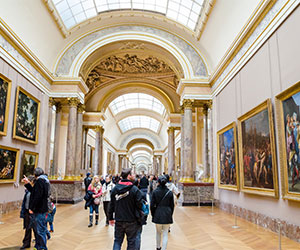