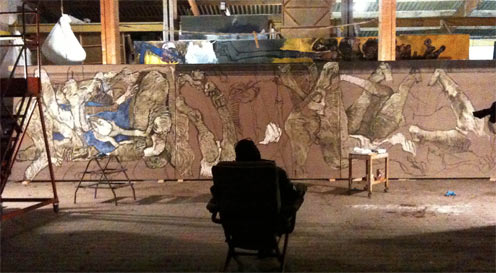 Monumental does it, madam

Born in the Parisian suburb Villecresnes in 1954, and the daughter of Flemish parents; Lydie Arickx is a notable sculptor and painter. Today she lives and works in rural Landes near Bordeaux. After graduating from ESAG, École supérieure d’arts graphiques de Paris in 1978, she pursued her career in art. A defining moment was a 1982 exhibition of her pastels and oils at Jean Briance. By 1988 her international standing had taken her to exhibit and sell her work in Belgium, Germany, the Netherlands, Spain and the United States.

She creates semi-abstract figurative work and appears serious and unpretentiuos. Some think her work is gloomy, but in reality it is an optimistic celebration of life. When saying what she does, you could be tempted perhaps to refer to Egon Schiele, and Francis Bacon. While her style is uniquely Arickx-ish and feminine, the works of Schiele and Bacon share this wonderful way of distorting limbs and painting flesh so abundantly present in Arickx’ art. When it comes to Bacon it is perhaps less of a coincidence. She has exhibited in New York with Bacon, and the two have influenced each other. There is also a brutal economy in the strokes that can only be achieved by hard grafting and an accute artistic eye. The compositions are dynamic even unusual but there is nothing too much, nothing too little. Just so. An economy again that says ‘Bob’s your uncle’ over ‘Robert is very much your mother’s brother.

Her paper-, canvas- and fresco work tend to be on a monumental scale only matched by her sculptures. Monumental is an understatement of sorts, because she is known for creating 25 m long fresco work.

She works in barnlike settings where she can hoist large works up and down and can get as close and as far away from her work as needed to examine the artistic development properly. She seems happiest on a stepladder, and at one with mixed media not just on the painting medium, but also on herself. In her creations she sometimes introduces this earthy, raw tactile quality which breathes lives into the work, the same way as it takes the umpf out of highly polished work by other artists.

In 1993 she was recognised for a series of distinctive frescos for settings such as the Paul Brousse Hospital in Villejuif and the Cellars of Château Lagnier.

Lydie has kept herself busy with numerous exhibits throughout her career and in 2012 alone she has appeared in 3 solo exhibitions in Paris. Her works has been displayed at the National Museum of Modern Art in Paris, Centre Pompidou and the Museum of Tokyo. 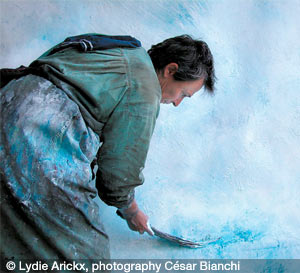 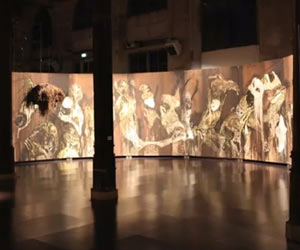