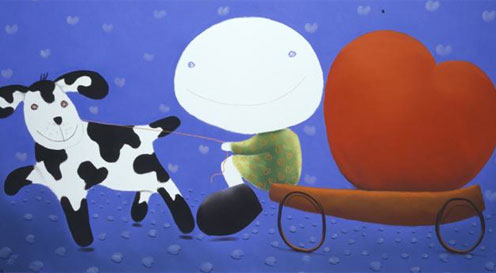 Something very tender and caring about it all

Widely known for his passionate representations of life in all its disguises. Thorpe applies colours expressively. He masters an economical use of signifying objects to arrange his paintings in altogether striking compositions. Though Thorpe is so very much himself in everything he produces, you cannot help but seeing a few parallels to L S Lowry’s delibertately naïve paintings.

There is the happy Thorpe and the less so

Most of Thorpe’s motifs fall into two almost pipolar parts. On the one hand he makes really affectionate portraits of children and their joy for life, and about love and families. On the other hand he represents the grown up struggle of working class North England in muted and dark colours and smoking factory chimneys.

Red brick council estate Britain and the steel works are very much evident but is perhaps more a backdrop than a social comment. Marc Chagal’s dreamworld of flying goats and whatnot were ultimately tied down to visual references borrowed from his Jewish upbringing in a village in the former Soviet Union. The same could be said about Thorpe and North England.

The two modes, ie, the happy and the sad is no coincidence. The artist paints large smiley children’s and animal faces when he wants to regulate his personal mood upwards and feel happier. The immediacy and pure joy of children is in a sense what sums up the best things in life for the seasoned artist.

When Thorpe set up studio in North Yorkshire, money was a constant worry. For reasons the artist doesn’t really know, he began working on the first of his square sheep and realised it was a kind of self portrait with himself standing firm against hardship and societal norms.

The signature style in the art

Over time Mackenzie Thorpe has built up a vocabulary of expressive artifacts, that you cannot help but want more of. Frankly, it is a little like Nick Parc’s Grommit which has the signature frowning, the nitting and Wallace´s keen interest in Wensleydale cheese. For Thorpe, it is the round faces with smiles, the big klunky feet. Other hallmarks of his art are red tulip-like flowers, red hearts and the odd inclusion of animals. Many of these are really not applied as an overly intellectual excercise but as mood makers. Others again, such as bridges, and dramatic skys and chimney stacks are deliberately used as symbols of transitions and changes in life.

I draw and create shapes using colour. And that allows me to dive in the deep and explore, like the same way a three-year-old does in the kindergarten. Bish, bosh, bash, and it’s finished.

”What is it?” you ask. ”Oh that’s my house, and that’s dad coming home from work and there’s a dog and my swing in the garden”. Her whole world is there, in those colours

Mackenzie Thorpe was born in 1956. Being the eldest of seven children in his family, Thorpe grew up in the industrial town of Middlesbrough, North England.

Due to dyslexia, school was a tough stint and Mackenzie left school at the age of 15 without any formal qualifications.

Eventually, after having working in the local shipyard, he applied to a nearby art school. After a couple of years he transferred to Byam Shaw School in London; and for the first time gained access to many art galleries and museums for valuable input to his art. 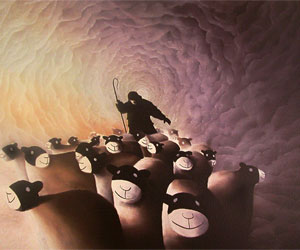 Out of the clouds © Mackenzie Thorpe 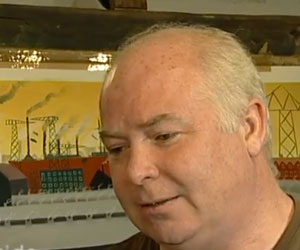