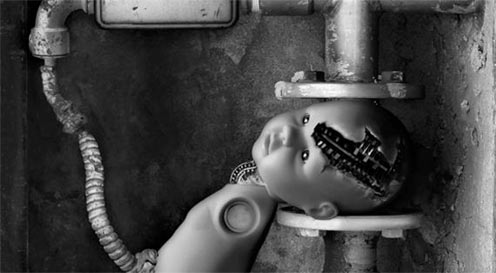 The Polish-born Marcin Owczarek lives and works in Lier in Belgium. Aside from his art, which speaks volumes on its own, he has an articulate artist statement. In fact, it could almost double up as a manifesto of Owczarekism; and if we were to sum it all up in one sentence, it ought to say:

A concern for the onmarch of human self-destruction through wars, greed, urban polution, depletion of natural resources; and industrial abuse of animals or their outright extinction.

The driving force behind the art

Mirroring the more sinister aspects of the 21st century is important to Owczarek, and offers a creative source never to be exhausted. However, the press shares a responsibility with the artist himself in not making it a straight-jacket for the rest of his career.

You don’t have to look far for circumstantial evidence from the past. When Georges Brague became a cubist, he was somehow never as fully authorised so as Picasso. A simple hypothesis to test by comparing the amount of webpages and printed pages on old Pablo versus Georges. It had a lot to do with him having been pigeon-holed as a fauvist before. Once a cubist, Brague could then not approach more lyrical abstraction for having let the mechanisms of the art market lock him into cubism for good.

But there is another reason for saying all this. The talented Marcin is only from 1985. While he has a personal and mature style that would have taken other artists a lifetime to achieve, you simply sense immediately that this is just the beginning.

There’s far more in him

The method developed and whole-heartedly adopted by the artist

So how exactly does he work? Well first off, he unpretentiously terms the results ’photographs’, and so they are. But rather than being the odd snap from the camera, you are being greeted with loaded and multilayered compostions of several photographic sources.

The black and white montages tie in with the sinister ’anti-utopian’ world of exposing who we are, and the consequences of who we’ve become.

Conveniently, though, it also follows acquired wisdom inhereted from the first darkroom photo montages of Alexander Rodchenko and the Bauhäüsler(s) who could only work in grayscale for practical reasons. Simply, if you work in monochrome, the condition for combining the various elements is perfect. Some might add, it is much more powerful and convincing as well.

In greyscale, you don’t have to faff about all day worrying about matching up the colours of shadows and highlights. You can manipulate depth and the scale of sampled elements with extra ease; all without breaking up the creative flow. When the artist applies colour it is more in local areas for emphasis or meaning in the otherwise monochrome environments. On more recent work, more colour has been applied, but Marcin wisely stays with the largely desaturated.

An ever increasing visual vocabulary + some repeating patterns

Owczarek deliberately repeats certain elements almost as recycleable symbols. An example is a set of three chimney stacks. Dolls, sheep, fossils, fish scales neo-classical architecture and power plants are some of the ingredients. Part of the visual vocabulary applied consists of cracked and flacky surfaces. In turn it helps create a sense of decay and deriliction. Some of the gargoyles and architectural gems of European cities are also noticeable. In the photograph The Keeper of the City Keys you recognise part of Gaudí’s Casa Mila in Barcelona as a prop in the far right of the composition.

Nailing the jelly to wall once and for all

While we know his work speaks to us, the devil’s advocate would suggest it is all straightforward photoshop montage of the kind that any graphic design student could churn out.

It is an equally damaging and slippery argument. In the end you decide that it is irrelevant, and stays irrelevant. This is mainly because design students could, but clearly don’t.

If it is aimed at the use of software, then anyone doing anything visual these days can’t escape using Adobe Photoshop. It is just a tool like a brush or typewriter; and what you do with it either says something valuable about the human condition or it doesn’t.

Mathematicians have long accepted that if you locked enough chimpanzees into an office with a typewriter and kept them fed, watered, and let them procreate, then they would end up typing Shakespeares Sonets eventually – by chance. It is called Eddington’s Infinite Monkey Theorem.

As famous as the theorem might be, you fear it misses its own point entirely. Why, for instance, is copying Shakespeare the myopic benchmark? Why not something profoundly original like the Ensteinian chimpanzee’s solution to infinite renewable energy?

The artist in a Belgian context

At its completion, The Garden of Earthly delight, by Bosch must have knocked people back. It clearly came from a different planet and there has not been anything quite like it either before or after its eerie, baffling presence found its way into our public consciousness. It doesn’t even fit the age in which it was painted. Many art critics including Matthew Collings have attempted to get to the essense of it. But the only thing most people gather is that it centres around the choices of human behaviour, and how it leads either to a life in pleasure or one in hell and damnation – or both regardless of what we do.

Owczarek has cleverly ecchoed the title in his 2010 triptych ‘The Garden of Urban Delights’.The 210x60cm photograph has not just captured a similar level of duality, but has further layers of ambiguity with the decapitated heads, the fosillised predators and the architecture at odds with its own structural integrity.’ 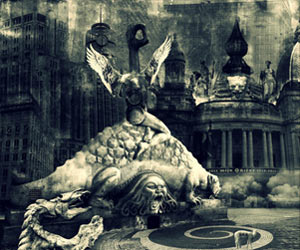 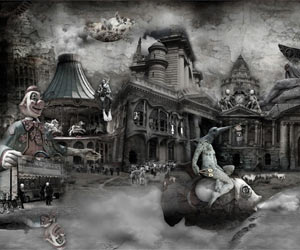 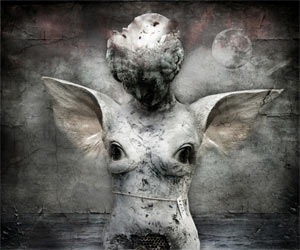