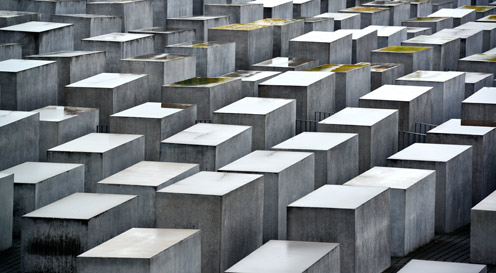 A stone throw away from the Brandenburg Gate in Berlin there is a large public work of art that cannot fail but impress anyone visiting it. Its sheer scale and repetitive rhythm force you to reflect on its presence whether you want to or not. In that sense it is art that has achieved its goal. Conceived by architect Peter Eisenman, it is a 19,000 m2 memorial to the Jewish victims of the Holocaust consisting of 2,711 concrete stelae varying in height but all having the same width and length.

You cannot blame the locals for thinking that ‘Denkmal für die ermordeten Juden Europas’ does not roll off the tongue easily. So as with so many of these things, the sculpture is referred to by its unofficial name: the Holocaust Memorial (Holocaust-Mahnmal).

The concept for the Holocaust Memorial

Eisenman has clearly stated that no symbolism was intended, which is all well and good because just about everyone else sees an uncanny resemblance with cemeteries. Some people would also not help but consider the large quantity of concrete items and relate them to the number holocaust deaths. Luckily the sculpture does not consist of 6 million pieces, which would just make the art too obvious and labour the point beyond reason. By being neither pretty nor obvious, it avoids stooping to a level overpowering sentimentality.

According to the originator it is about something bigger than cemeteries and numbers. Peter Eisenman wanted to produce an uneasy atmosphere by suggesting an ordered but mad system out of touch with humanity. As such the goal has been achieved, because when you walk through the gabs between the stelae, you suddenly become slightly disoriented. The intended perplexity is achieved by simple parameters such as concrete in different heights on the sloping site, and the counter-intuitive result is that it turns the archetypical grid structure into a labyrinth.

There is a visitor centre underneath the site. It holds the names of all known Jewish Holocaust victims, obtained from the Israeli Yad Vashem, along with last letters from europeans Holocaust victims, and information panels to help inform and contextualise.

Denkmal für die ermordeten Juden Europas was inaugerated 60 years after the end of WW2. At the time, the reception had been overwhelmingly positive. However with anything costing €25M and taking up premium urban space, you must expect some controversy. Surprisingly, there was little of that except from Ignatz Bubis, the leader of the German Jewish community, who voiced that the whole thing was ‘unnecessary’ in his opinion. Other parts of the Jewish community voiced a sense of gratitude mixed with some reservations. To them, at least, the sculpture and visitor centre were incomplete statements focusing on the victims and not the perpetrators. In addition it did not include other victims of nazism thereby imposing an unintended hierarchy of suffering with Jews right at the top.

What they say about design by committees is true

Who ‘they’ are is never quite clear, but the whole memorial project turned out to be a painful process of artistic compromises, urban planning nightmares and years of meetings.

First of all Eisenman is credited for the final piece of art, but the architect actually submitted his concept as a collaboration with fine artist Richard Serra (cf minimalism) whose idea was very different in character by being grander and more labyrinthian. Serra quit from the project diplomatically citing that he left out of professional reasons that did not have the slightest to do with the merits of the project. The truth however was that Chancellor Helmut Kohl had personally insisted on numerous changes to the design that had watered the concept down to its bare essentials.

To say that Helmut Kohl had taken a keen personal interest in the project would be an understatement. As head of state he felt compelled to veto the winning proposal of the first contest for the memorial, and called in a second competition with the same selection committee to shortlist all new contestants.

The monument is a dignified response to history but one that has to guard its dignity and reputation jealously. Its success is held in a precarious balance. Today the Holocaust Memorial is a popular place to visit and is quietly thought of as a tourist magnet, though saying so aloud would devalue and trivialise the essence of the memorial and enrage both those for and against its existence.

This possible outcome was predicted by the German Novelist Martin Walser who quite early raised his concerns about its predicted popularity. Simply, he called the monolithic structure ‘the exploitation of our disgrace for present purposes’ and ‘a ceaseless presentation of our shame. On the other hand a large part of the German population can live with its touristy status and are thankful for the existence and popularity. This is because it helps combat any future denial of the Holocaust throughout Europe quite effectively.

The aforementioned criticism of focusing on the jewish suffering only has long since been addressed. In the meantime Berlin has created different but just as poignant memorials for other victims of Nazism. For instance the Memorial to Homosexuals Persecuted Under Nazism by artists Elmgreen and Dragset or the Memorial to the Sinti and Roma victims of National Socialism by Dani Karavan.

Vandalism has not been as much of an issue as the local government feared. This is partly because our worst fears never come to true, and because most people are good not evil. More importantly though, the success has to do with a graffiti-repelling coating applied to the concrete.

However, the original anti-graffiti agent named Protectosil quite quickly had to be replaced by another. It transpired that Protectosil was produced by the Swiss company Degussa. Unbeknownst to Degussa, one of its subsidiary partners had been involved in the production of Zyklon B, i.e. the gas used by the Nazis to kill jews in gas chambers. 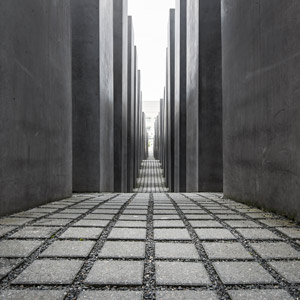 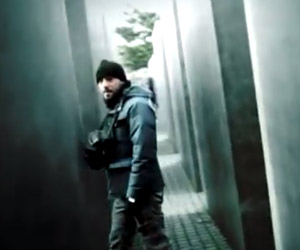 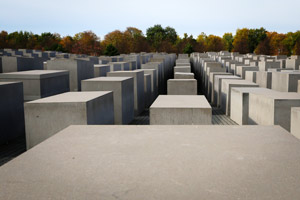 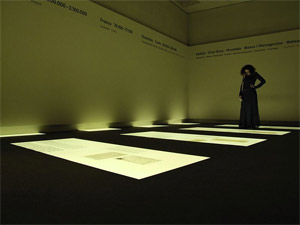