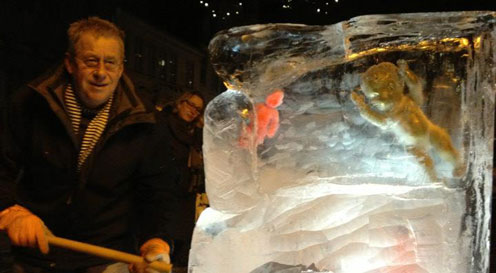 mars men are few and far between

In a studio in Kolding, Denmark you find a seasoned artist who has become a household name in many homes, offices and places of worship. Mogens Leander’s works have always conveyed meaning which transcended generations and warped time. However, you are not going to find a coin-operated time machine in his studio; and yet you are in for some surprises. The first of its kind is the local vernacular. The art space is lovingly referred to as DOCTOR ARTES KUNST CREMATORIUM. Please do not dwell for too long on the name, because there is nothing morbid about the bright studio where the artist beavers away on his projects. No, it is just an example of the informal atmosphere that makes it all the easier to talk to the artist.

A master of the lost and found

Amongst other things, Leander is known for his contemporary take on icon making, though he is also behind a full body of work that does not fit into that category. Take for instance the more recent bronze castings. As a common denominator, though, Leander’s easel art is perhaps best described as mark- and sense making. His work is a mixed-media fusion of found objects, patina, glazing and grunge effects with tactile qualities. Layers of adding, and partly removing text is similar to palimpsest, a scribe’s act of scraping off parchment to recycle the medium for new scripture. The chance combination of what was previously said – and what is now being said – creates a third message of sorts. As for the found objects, they are collected in the wood near the artist’s home or on travels abroad. When he cannot collect, he sketches and photographs. Hence, the battered and scruffy beauty of Venice has caught the artist’s imagination for the last two decades.

Various elements reoccur like signatures in several pieces of work. Take for instance a quality stamp once used to mark pork as exquisite quality. Another is the number 22, which is pillow-embossed into the surface. It refers to catch 22, the famous novel and multi-linear plot by Joseph Heller, that no one reads from cover to cover. The phrase has become known to illustrate a problem for which the only solution is denied either by a circumstance inherent in the problem or by a rule. It somehow fits universally into human existence, and neatly into the myriad of corrective decisions to be made whilst working on works of art.

Easel art aside, Leander’s art displays a versatility in the choice of materials. He creates installations of various kinds including ice sculptures for a so-called culture night. In addition, he is perfecting the art of cire perdue bronze casting. He began with silk screen production, and then obted for oils and acrylics.

Leander and the New Icon-School of Denmark

Mogens Leander has created art for decades. He would have succeeded any odd how, but chance favours the prepared mind. So a defining moment was an invitation to bring his art into a Danish church. Fully ware of the etymology, it then evolved into a series of work called Exodus. So far Exodus has been exhibited in 38 churches, 7 museums and a number of galleries. Leander had essentially looked at orthodox icons, and felt compelled to bring them into contemporary art as a modern representation.

However, the initial exhibition request from a church was counter-intuitive to say the least. You see, Leander is not shy of blending spear heads, bronze age marks, not to mention heathen and alchemist signs into his art. Mark making from various other faiths might also enter the equation, and the artist might crack a joke or examine a pun in writing. Secondly, popular notions of icons are that they belong in Orthodox eastern churches, and ought to stay there. But what really makes it odd is that Nothern European churches are visually austere. They are products of their own iconoclasm against power and riches, called the reformation. Either way, their dogma of ‘minimalist design’ persists to this day as ‘less is more’ and ‘no thanks to bling’.

As this artist act defied gravity somewhat, the next one did as well. Leander embarked on writing three books to contextualise his art. What could have become a neat PhD in iconography, was better invested in writing about icons in a way that engaged both academics and the rest of us. The resulting books are equally informative and fascinating. Along the iconography and semiotics, Leander interleaves his own art almost like a scrapbook.

Mars men are few and far between

Every piece of art is a child of its age, and yet there are no fashion fads here. You immediately sense that the art will weather the passing of time remarkably well. Clearly, there is still something amok with time and space that takes a little getting used to. But so be it. For one, the art includes elements going as far back in time as human civilisation. On another note, much of it is bang up to date. Some of it even resembles the urban tagging of juvenile delinquents. But ironically, so does Roman graffiti from Herculaneum. Yet, there is no sci-fi and Mars men lost on all this. That the works span millennia is merely a gift to us. As a welcome side effect, it then also reminds us of who we are, and where we came from.

This is the exact moment in time, when the conversation could be diverted to two dear friends of the artist. They are no other than Rita and Robert, two embalmed mummy rats. These installations are not only keeping the artist company; they are also lying there strategising — as Leander aptly puts it. He says so with a deadpan expression and moves on to something else while you cannot help giggling quietly inside. The diseased rodents were found dead at the farm of his brother’s. As a Memento mori they are now acting as a serious gimmick. Involuntarily, they are adding a welcome dose of informality to any developing conversation on the transcendal signified.

It is indeed called for — not because the artist shies away from serious conversation as much as to prevent it from being all serious all of the time. Given that the art includes a fair dose of both religious and agnostic references, you sense that the warm informality is a welcome spice. But it also reflects itself in his production where the serious, and the less so, is being juxtaposed.

The semiotics inherent in Leander’s works immediately make them ‘conversation pieces’, and it is no coincidence. Years ago, before Leander decided to become an artist, he worked in a similar vein of alchemy. He was a typographer and maintained a keen interest in etymology, glyphs and symbols. As time went on, the interest migrated into his art and provided the unique Leander-esce flavour we find today: An art where there is rich opportunity for all of us to project our own frame of reference into the art.

Through hard graft and serious testing, the artist has become as unorthodox in his choice of materials as his post-modern interpretation of icons. Call it an acquired level of chemical appreciation, without it ever being a clinical trial in a laboratory. It is justified, because many artists pay scant attention to the longevity of their ‘de-composing’ mixed media compositions. And while all art must perish eventually, Leander is keenly aware that his church art commissions ought to stay mounted for at least a couple of centuries – and all without the tender love and care of restoration experts.

It might go some way to explain one prominent element in several works of art*. One import from the great icon tradition is the use of metal (c.f. rizas, oklads and basmas). Here the artist could have cut corners by using poxy silver leaf. Instead he has used solid 1 mm pieces of silver plate as crafted to specification by a local silversmith.

Texture gels also proved inferior for the tactile dimension the artist wanted, and he soon opted for the much harder Polyurethane normally favoured by industry. You could find one obvious chink in the armour, and that is the fragile medium paper. It simply must be a key ingredient in the works. But even so, it is tugged firmly down and varnished.

Attribution and copyright notice
All photos on this page are by courtesy of the artist Mogens Leander, © all rights reserved. 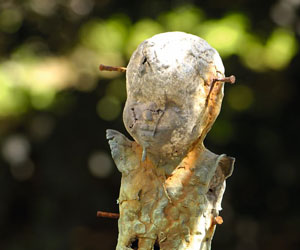 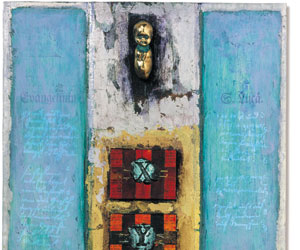 A selection of icons 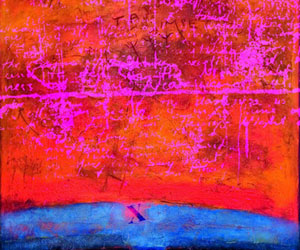 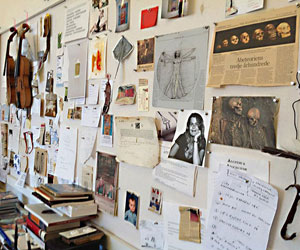 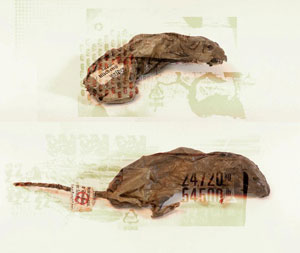 The New Icon-School of Denmark