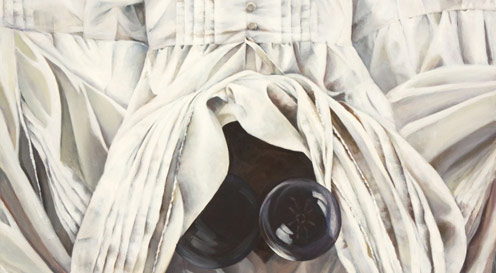 The most televised art broadcaster

For all their poetic delicacy and sophistication, it is perhaps more apt to say that the works suggest feminine sexuality in a respectful and reassuringly confident way. Just as importantly, it is one of those rare female expressions of it rather than the somewhat overexposed male manifestations that we are all too familiar with.

It sounds a tad serious until you are being introduced to a sparkle of Monikaesce humour:

It’s about women’s lives, about happiness, sadness, ecstasies and all intimate moments of their lives written on used underwear. Each painting can be a different story written in “underwear language”.

The series of work shares a beautiful background story that transcends generations of women. It does so by weaving into the very fabric of the works a tradition popular in Poland, where the artist comes from.

However the chosen direction for this series was a little like a chance happening — unless you are one of those who insist such phenomena do not exist. Simply, whilst moving to another house, Mysiak found a nearly forgotten bottom shelf storing embroidered linen, petticoats, handkerchiefs and lingerie handed down to her from her own mother.

Such a set is part of a bride’s dowry prepared for their daughters by resourceful mothers, often handing over elements of unused linen from one generation to the next. As you could expect, the significance of this is not just a helping hand. No according to the artist it is:

preparing a young woman for her future role delineating her sexuality, which had to fit a set of desired characteristics of a faithful wife and patient mother.

In that sense it is a rite and a beautiful one at that. But the senses also come into play by almost replaying recorded messages from the past, as the artist says about the objects: “they were lying there, forgotten but neatly folded, taken out rarely and carefully like reliquaries, just to be touched, smelled and remembered”.

It is clearly a story that had to be told, and told well by someone. In that sense we would go as far as calling this series of work an important contribution to art.

The canvases and drawings are almost monochromatic pictures, and with their soft tonality, they actually emphasise the few hues making them all the more vibrant.

Anyone who has tried their hands on representing drapery convincingly knows how difficult it is to do technically. However, technique is not enough on its own. The attempts will collapse and die as art if you paint them exactly as observed. You have to have an affinity with fabric itself and feel it somehow. You also need to bend a few rules to make it potent enough without it losing its believability. In that context, Mysiak masters everything the neo-classical Ingres understood about drapery, though with more of the expressive touch of Lucian Freud somewhat better suited to our age.

Monika Mysiak, who is behind this highly personal art, lives and works in Chorzów, Poland. In 2012 she graduated with honours in painting from the Academy of Fine Arts in Katowice. Two years before she graduated in Computer Science and Econometrics from Katowice’s University of Economics. At the moment she is studying for a PhD at Academy of Fine Art in Katowice along with being a practicing artist of great promise.

You can find out more about the artist by visiting her website.

Image credits
© images by courtesy of the artist Monika Mysiat, all rights reserved. 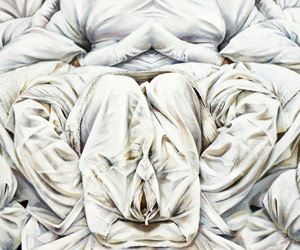 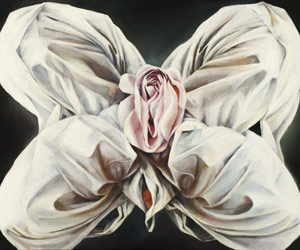 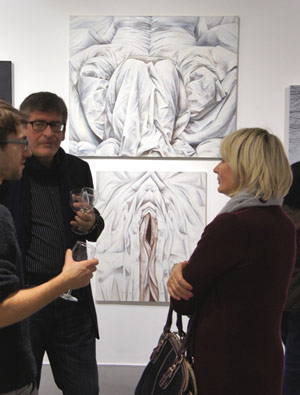