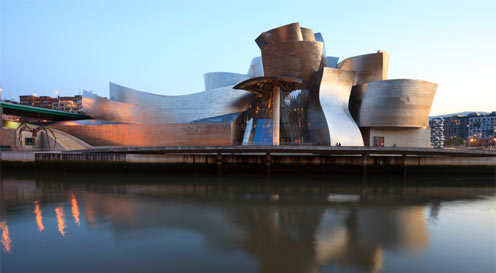 Silver foil and fish scales have never been this exciting before

Built over a 24,000m² area by the Nervion River which runs through Bilbao to the Atlantic Coast of Spain, the Guggenheim Bilbao is a celebration of the culture, heritage and diversity of this capital city of the province of Biscay, the autonomous community of the Basque country.

The original plans to improve the image of Spain’s Atlantic region to the outside world and build a cultural hub with a dynamic programme of events and international outlook in the heart of Basque Country date back to the late 1980s (see related article about the Bilbao Effect). As a result of this quest, in 1991 the Basque authorities invited three architects, Frank O Gehry, Coop Himmelblau and Arata Isozaki, to a limited competition to create a contemporary masterpiece. American Architect Frank O. Gehry won the competition and this architectural landmark opened its doors to visitors on 18 October 1997. Since its opening, with its 11,000m² dedicated exhibition space it has also become the home of one of the world’s most prestigious institutions for modern and contemporary art: the R. Guggenheim Foundation.

Amongst other things, the collection has a unique focus on contemporary Basque and Spanish art

The collection in Guggenheim Museum Bilbao

Other prominent holdings include: paintings by Mark Rothko (Untitled 1952-1953), Willem de Kooning, Robert Motherwell, Andy Warhol, James Rosenquist, and Yves Klein. Selections from this collection are selectively exhibited in rotation throughout the year.

In 2005 the museum commissioned Richard Serra – The Matter of Time – and currently exhibited on the ground floor – 104 the Arcelor-Mittal Gallery. Other permanently featured works are Louise Bourgeois’ Maman which greets visitors alongside the Nervion River; Jeff Koons’ Puppy by the Museum Square; Jenny Holzer’s Installation for Bilbao; and Fujiko Nakaya’s Fog Sculpture which comes alive during the night.

Openly inspired by the design of hull of a ship and with an artistic vision of creating a building that gives an impression of movement to fit in with its immediate environment, the Guggenheim Bilbao heavily relies on Gehry’s signature style of curving lines and series of interconnecting and twisting buildings. Glass walls and suspending walkways are highly visible through its cladding in a metallic titanium skin which creates a spectacular structure with the backdrop of La Salve Bridge at the slopes of Mount Artxanda,. The titanium façade created by half a millimetre thick panelling and this “fish scales” effect not only endorses the floating feel of this hull-like building, but is also reminiscent of the city’s industrial past by reflecting light from the river and creating an ever-changing landmark throughout the day. Limestone is also used to create a contrast with the light and floating effect.

Visitors can enter the main building via a broad stairway by the Museum square, but the entrance at the rear of the building on the estuary site is directly accessible to the main foyer and is also used by groups, school children and the disabled.

Once through the foyer, visitors find themselves in the true heart of the museum measuring 50 metres in height, surrounded by a glass and limestone curvilinear structure. In contrast to the glittering metallic façade, the inside of the building is mostly made of glass and stone and the curving walkways suspended from the ceiling create a light-filled and flowing space. The exhibition areas inside the building are distributed over three levels with a total of 20 galleries. The building also accommodates a 300-seat auditorium, a restaurant, 2 cafes, a store and a bookshop.

On the Architect Frank Gehry

The 1989 winner of the prestigious Pritzker Architecture Prize, Frank O Gehry first came to architectural prominence when he built the Vitra Design Museum at Weil am Rhein and since than he is renowned for numerous large scale projects which explore new forms and materials such as copper, stainless steel, zinc or titanium. Born in Toronto and living in Los Angeles since 1947, Gehry’s works include houses, shops, museums and his most remarkable designs include: the Walt Disney Concert Hall in downtown Los Angeles; the Experience Music Project in Seattle; the Weisman Art Museum in Minneapolis; the Dancing House in Prague; the Vitra Design Museum and the MARTa Museum in Germany; the Art Gallery of Ontario in Toronto; the Cinémathèque Française in Paris.

It is not just the architecture which is winning awards. In 2000 Guggenheim Bilbao won the prestigious EMYA.

Run by the prestigious restaurateur Martin Berasategui, the restaurant offers most attractive Basque cuisine to visitors

Boutique and bookstore offers wide choice of books and printed materials relating to the temporary exhibitions and museum’s own collections. It has an exclusive range of gifts and design items specifically commissioned by the Guggenheim museum. 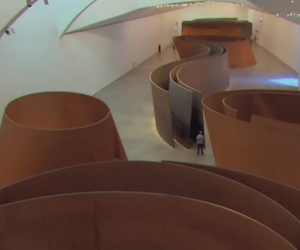 A tourist's take on the venue 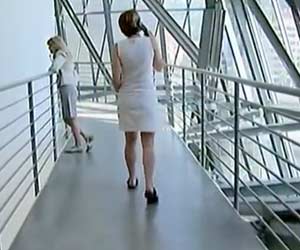