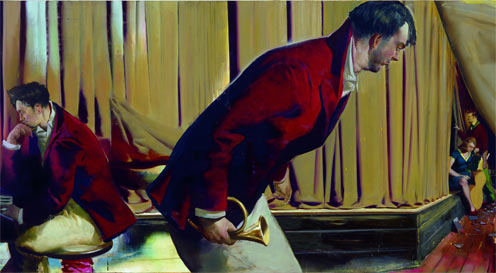 A screen of smoke not to be ignored

The surname Rauch literally means smoke and some might argue that the artist smokes Dutch weed. But nothing is further from the truth. The painter is a level-headed character seldom lost for clear reflections, and as an artist, he is gaining more and more recognition for his indecipherable images containing both figurative and non-figurative elements. For art critics he is ‘marmite’ in the sense that you either love or hate the stuff he does.

The Vincent-awarded artist from the former DDR, Eastern Germany has been of ever increasing interest to American and European collectors for the past 20 years. He essentially does what he has always done, in what some people might want to pigeonhole as German Neo-conservatism. As such he has never intended to be a revolution. Only an evolution – albeit a slow and deliberate process of incremental perfection.

And perfect he is. He is not surrealist and yet he has much in common with surrealists by referring to dreams or the dream-like in his compositions. Of course, an admission to being a surrealist would render any interviewee an anachronism of what art addressed a century before. And who wants to be labelled a dinosaur? Not Rauch, he is too media-savvy. But either way he needs not worry. His art is clearly a notch or two more impactful in our age.

Figuring out the figures

For one, the ambiguity is non-ending and wonderfully deliberate. It is characteristic of a movement we have come to know and love as the ‘New Leipzig School’. Secondly, there is an incredible level of interaction with the viewer that is hard to escape. Look for instance at the figures. Either they are there with their empty and deserted looks. Alternatively, they appear as if they are fully aware of your presence as viewers, witnesses or voyeurs.
White outlines round contours sometimes make persons appear as they have been stuck unto the canvas. Bizarrely, A highly detailed person can stand next to one which is incredibly crudely outlined. It is best described as a summary of a hint of a reference, and yet it works. It is a paradox, because technically it should not work because it defies everything any art student learns about depth and atmospheric perspective.

Rauch is probably one of the most videoed German artist after Gerhard Richter, and it is not hard to figure out why. There is something mesmerisingly charismatic about this soft-spoken and articulate person, and his wife Rosa Loy.

After a while, however, you ask yourself why you look and listen to his interviews, because you are left none the wiser about his art.

But then again, it is also part of the act for many of Rauch’s contemporaries who have little or nothing to do with the Neue Leipzig Schule. Think here Tal R, Kathrine Ærtebjerg or even Jeff Koons further afield. It goes comfortably along with the idea that visual art is a language of its own, which may not be possible to articulate with words, so why attempt to do so? In a way it makes art more honest to regard it that way. A visual concept explained in words might in many cases be an after rationalisation or justification in words. In contrast, many artists might actually tell themselves ‘Let’s do this for the sheer hell of it.’

The retrospective Exhibit in New York Metropolitan is a point in case. Neo Rauch chose to call it ‘para’ and when asked why; he confidently avoided having to justify it. He simply stated that he was interested in the many possible meanings that one could project into it.

Is the narrative in the art dead or does it just smell that way?

So what is this amalgamation of visual bombardment he pulls together? Well, you start off with the illusion that there is a narrative, and then when you’ve followed something you think is a narrative strand, you fall flat on your face. Then you realise it is all up for grabs, and maybe that is the whole beauty of it all. Within, there are trace elements of magical realism, social realistic streaks combined with hints of the surreal. In addition, there is a whimsical fascination with uniforms and struggle, which in turn has ample inspiration from having lived behind the cold war iron curtain. Some recurring elements are uncertainty, architectural props like walls used as dividers or curtains and ending abruptly. Some references are extra intriguing because they span across several centuries, and even within one painting. It may be a cunning attempt to take the art out its age and make it transcendental for future generations. Then you also recognise identity, alienation and family as intersected with politics and the aforementioned props and scenes. The result is compositions of great complexity.

Neo Rauch was born in 1960 in Leipzig, and was raised by his grandparents due to the early and tragic loss of his parents in a train accident. In 2002 he received the prestigious Vincent Award for his contribution to contemporary European art, has held numerous solo and group exhibitions and pieces of his work line the walls of many art museums.

He received his formal art education at Hochschule für Grafik und Buchkunst in his home city of Leipzig. He studied under Professor Arno Rink (1981–1986) and with Professor Bernhard Heisig. Together with generations of artists from the same education environment, he is part of a movement in contemporary art called the New Leipzig School.

The movement includes the artists Rosa Loy, Tilo Baumgärtel, Tim Eitel, Paule Hammer, Katrin Heichel, Michael Triegel, Tom Fabritius, Christoph Ruckhäberle, David Schnell, Matthias Weischer, and Aris Kalaizis. Whether it is a movement or just a clever marketing ploy has been subject to heated debate. However, as time goes by, it is becoming more and more accepted as such. As the name suggests there has to be an ‘old’ Leipzig School and yes that consisted of the aforementioned professors who were also instrumental in arranging the 1977 dOCUMNTA. 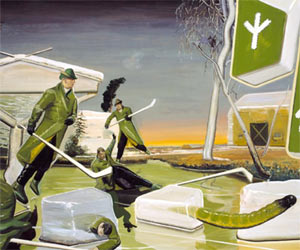 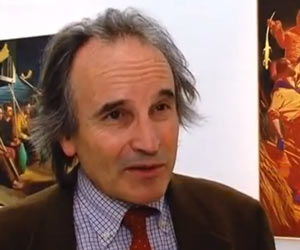 A good brief introduction to the artist's work 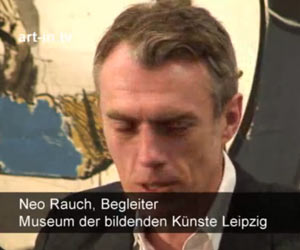 A press conference subtitled in English 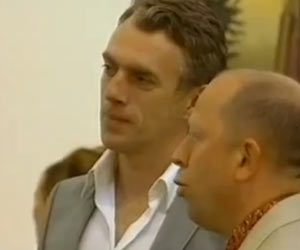 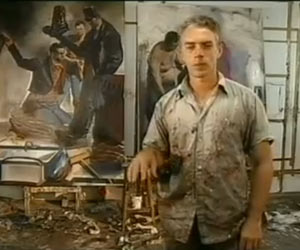