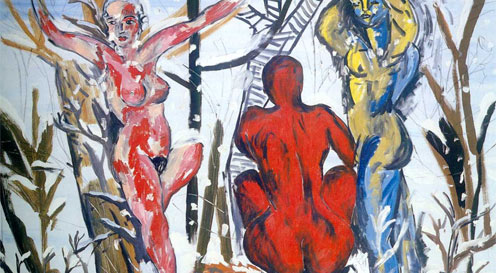 One of the most influential art movements in Europe since WW2 has proven to be the New Wild (Die Neue Wilde). It is a 34 man strong group of artists from Germany, Austria and Swizerland and their efforts have given us some refreshingly carefree art, that has been collected by museums with great gusto ever since.

The movement became known as ‘Neue Wilde’, and ‘Junge Wilde’, ‘the new wild’ or ‘the new violent’.

The term “Neue Wilde” was coined by Wolfgang Becker Aachen. Mr Aachen, an expert in expressionism, and a museum director, used the words to address German characteristics of a much wider movement influenced by the Italian Transavanguardia. Transavanguardia was an influence in art that spread almost simultaneously in Europe and the USA at the time. The French chose to call it Figuration Libre and in English speaking countries, it became known as New Image Painting or Wildstyle. It was Germany, however, which turned out to be the most fertile ground for the new art.

Stylistic Features of the new wild

The New Wild artists have thus far created highly subjective expressions. When it comes to painting, the artists have favoured large canvases with bold brushwork. Those would often contrast highly abstract elements with figurative ones. Another contrast is that of the highly controlled and the wildly spontaneous side by side. The artists also appear to share a certain fondness for neon-bright blocks of colour, interspersed with graffiti tags. In many ways the approach is peculiar blend between the academic discourse, the act of music sampling, and the creative hour in the kindergarten.

Fear, sexuality and obsessions are often being addressed in the works of art. Yet it is often tongue-in-cheek and light-hearted mockery. The latter is a refreshing departure from the more stuffy art that characterised much of the 1970s, and which dealt with equally serious topics.

The legacy of the diverse movement

In retrospect, the New Wild has turned out to be a mixed bag indeed. On the one hand you have Martin Kippenberger who fitted into the mold. He dealt with fear sexulality and religion. In fact Kippenberger’s great conversation pieces were his various crucified frogs. ‘To fit the mold’ actually means not wanting to ‘fit a mold’ when it comes to the artist. Kippenberger who died in Vienna 1997 aged 44, refused to adopt a specific style and medium. It resulted in an extremely varied oeuvre of sculpture, paper scraps, paintings, prints and other ephemera.

At the other end of the spectrum we find Bernd Zimmer, whose production have consisted of many forest paintings. These works of art could have been created 100 years earlier by a particular painter’s colony ‘Fynboerne’ at the Island Funen, except Zimmer’s colours are wilder.

Two things all the artists have in common, are this eighties timestamp, and an emotionally charged pallet loaded with angst and nerve. The New Wild are thus closer to the German expressionists of the 1920s in terms of colours than they would be comfortable to admit. 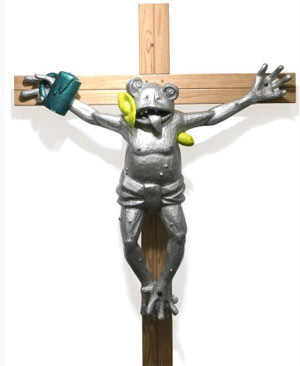