greetings from a very special island

In the Berlin river Spree you find an island logically named Museum Island, because it is where Bode-Museum, Neues Museum and the Pergamonmuseum are all situated.

Without a doubt, the Pergamon Museum is one of the best places in Europe to view excavated and/or reconstructed art and architecture from the antiquity. The three-winged building complex itself is so massive in scale that it contains remnants of antique architecture within itself. The highlights of the collections are:
• The Ishtar Gate
• Aleppo Room
• The Pergamon Altar
• Market Gate of Miletus
• The Ishtar Gate and the Processional Way, Babylon
• The Mshatta Facade
• The Meissner fragment from the Epic of Gilgamesh.

Along with that the Pergamon Museum houses a large collection of sculptures, mosaics, bronzes, jewelry and pottery under the umbrella term ‘Antiquity Collection’ (Antikensammlung)’

If you want to get a good idea of the place before visiting or you would like to remind yourself of the museum after visiting, the Google Art Project might be your first port of call.

The Pergamon Museum brings Mediterranean and Middle Eastern antiquity to us

The museum welcomes well over 1 million visitors per year, who as a whole vax lyrical about the art venue even at a time when you would expect that extensive renovation works and refurbishments would hamper all the fun. It is consistently listed as one of the world’s most popular museums.

In terms of quality, though not scale, the collection is up there with the likes of British Museum and the Louvre and allows us to experience a well preserved version of antiquity in one place. Here you encounter the ancient world of Babylon, Uruk, Assur, Miletus, Priene, Jordan, Olympia, Samos, Pergamon, Magnesia, Cyprus, Didyma and Egypt.

That was the upside. On the downside, these types of collections have the unenviable job of weathering one storm of controversy after the other due to their possessions. Often enough, this is because some past rulers or occupiers have granted the right to excavate and remove national treasures from their country of origin or, as in one case, offered emperor Wilhelm II of Prussia the pieces as presents.

In a nutshell it always sparks a discussion of whether a) all the museums in the world should return the ‘liberated’ goods to their place of origin — a chain reaction that would go on for decades resulting in a celebration of mono-culture where we end up with a bigger slice of ourselves, and hardly anything of the others. Or b) accept that the situation is not ideal and let the antiques stay where they now reside given that they are exotic in their new homes, and given that moving the objects further around may do more harm than good in transit.

Since 2013, the Pergamonmuseum has been undergoing large-scale renovation work. During the current stage of renovations, the hall containing the Pergamon Altar will close at the end of September 2014 and will remain closed to the public for five years. I.e. it is due to reopening in 2019. The part of the Pergamon Museum featuring the Market Gate of Miletus, the Ishtar Gate and Processional Way from Babylon, and the Museum of Islamic Art, remains unaffected and remains open to the public.

Pergamon is a Greek city situated in present-day Turkey. A central piece in the museum is the Pergamon Alter excavated in Pergamon. The devil is in the detail here, because according to biblical scholars, Pergamon is pointed out as the home of Satan along with good old Hell itself. Albert Speer Hitler’s favourite architect was so inspired by the Pergamon Alter, that he let it influence the design of the so-called Zeppelintribüne by the parade grounds for the infamous party rallies in Nuremberg. Today it is somewhat ironical that Speer ended up connected Hitler with relicts of the home of Satan by accident.

The current Pergamonmuseum is a second version of itself. The first was designed by Alfred Messel and constructed by Ludwig Hoffmann and lasted from 1910 to 1930. However, it was demolished due to being built on unstable foundations. Then the larger version was built to house the Antiquity Collection, Middle East Museum, and the Museum of Islamic Art.

The entire Museumsinsel project has endured a turbulent past indeed. The Pergamon Museum was severely damaged in air attacks during WW2. In 1945, the Soviet Army collected most of museum inventory as war booty or with the intention of ‘rescuing the objects from looting’. In 1958 most of the objects returned to the former East Germany though a large proportion of the collection remained in Russia in the Pushkin Museum and the Hermitage in Saint Petersburg. Following the division of Germany, so was the collection divided between the two Germanies. The Pergamon Museum lay dormant for years but reopened in 1959 in East Berlin, while what remained in West Berlin was simply stored at Castle of Charlottenburg for years without actually being on show to the public.

Open all week days except on public holidays

Café at the Pergamon Museum is closed due to construction works 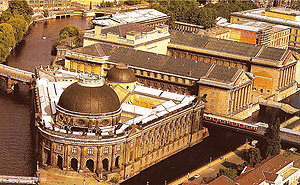 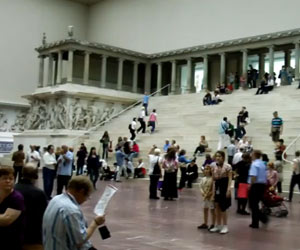