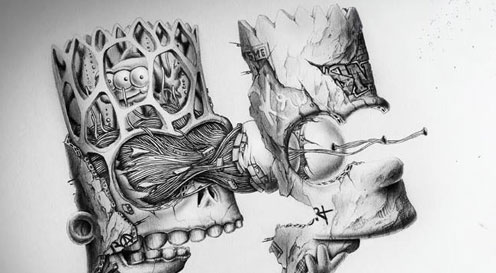 Two years ago we would probably not have rated this PEZky character as a potential genius let alone a fine artist; and then suddenly he produces a series critical work that is a quantum leap forward. It is the greatest wake-up call for anyone who judges a sketchbook by its cover.

You see the French artist from Nantes has always had an exceptionally good line as illustrator and designer. But to put it bluntly, he appeared to be a one-trick pony producing really predictable stuff. More specifically, he created sentimental babes with graffiti and tattoo style ornamentation. I.e. The kind of manifestations that did not say an awful lot about who we are as humans; and certainly did not invite us to engage. But then again, the intention was not there in the first place, and the result made the day for owners of iphone skins, electric guitars, skate- and surfboards.

Then PEZ produces ‘Distroy’, a series of work that includes a cynical appropriation of the Disney logo. It cannot fail to resonate with the love-hate relationship many French nationals feel for American cultural imperialism. The latter has this cunningly deliberate taste of fast food entertainment. A flat mass-culture that is fun and innocent looking, but honed to perfection by focus groups and market researchers to prey on ‘the lowest common denominator’ in society.

Laughter is America’s most important export

The pop culture characters that PEZ have produced are senewy slightly decomposing takes on Bart and Homer Simpson, Mickey Mouse, Donald Duck and Super Mario. Conceptually it is quite hot stuff and has some parallels to fine artist Nicolas Rubinstein’s work ‘Mickey is also a rat.’

It is not just the globally broadcast pop-culture characters that are up for a work-over. The artist did a cool spoof on the Japanese TO-TO-YO and who knows – maybe he takes on Murakami’s super flat tomorrow with his weapons of mass-distruction: the graphite pencils. 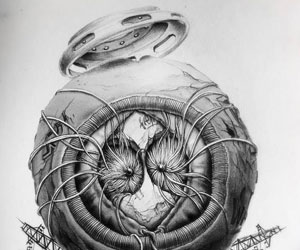 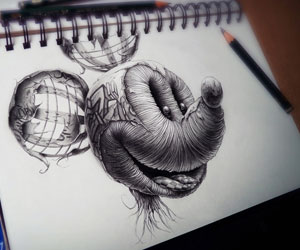 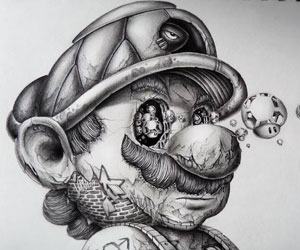