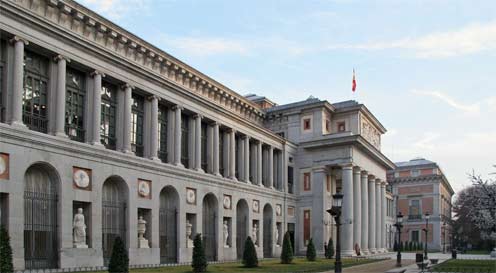 Founded in 1819 by King Ferdinand VII, the Prado Museum in Madrid is the most important art museum in Spain. It also happens to be one of the most popular art museums in the world, with a steady increase in the number of visitors every year. In 2011 alone, there were 2.9 million visitors.

The Progressive Museo del Prado extended and refurbished in 2007 with extra exhibition-, conservation- and storage space. But the accolades do not stop there. The museum is cutting edge in terms of visitor experience, is the European museum with the longest opening hours, and is on the forefront when it comes to digital technology.

The permanent exhibition includes many of the world’s most significant pieces of art from 12th to early 20th century. E.g. Prado houses the largest and most important collection of homegrown talents and Velázquez and Goya and in the world. But it also displays Rubens, and much other Flemish art, because of the historical tie between Spain and the then low countries of Netherlands and Belgium.

The Museum collection includes several of the great masterpieces of European painting, such as:
• Rogier van der Weyden’s Descent from the Cross,
• Hieronymus Bosch Bosch’s Garden of Earthly Delights
• El Greco’s Portrait of a Man with his Hand on his Chest,
• Velázquez’s Las Meninas, and
• Goya’s The Second of May 1808 and The Third of May 1808.

What might be really helpful for many an unitiated tourist, is a sense of priority in the vast museum. Of course, there are guided tours which are well worth attending but if you are strapped for time their website has clearly shortlisted a selection art to see if you only have one, two or three hours at Prado. It is kind of a dilemma that many great museums such as Louvre, British Museum and others share, that there is so much great art that it is difficult to get acquainted to the main attractions. What makes this difficult, though, is that what is considered an attraction is highly individual. But at least Prado has made a good attempt at going on what the public responds to.

The Prado has an ambitious program of temporary exhibitions of works curated from its own storage or lend from major museums around the world. Some past examples are Titian, Manet, Francis Bacon and Picasso.

Prado has gone more digital than most

As alluded to previously, Prado is quite fast on the uptake when it comes to technology that builds a stronger bridge to the public and the art community at large. A recent initiative is The Prado Guide which is The first Museo del Prado official app for iPad with 400 works of art displayed and expertly commented upon.

You can also order high quality prints be they framed or not at their webshop. The official Prado website is accessible and user-friendly and holds vast amounts of useful information in writing and in streaming video via their PradoMediaChannel. It might be worth checking out both before and after visiting.

In 2009 Prado became the world’s first museum to bring online mega-high resolution images of 14 masterpieces of its collection together with the Google Earth” project at Google. The project evolved into the Google Arts Project which now includes an impressive list of the most important art museums in the world. 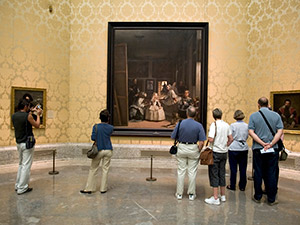 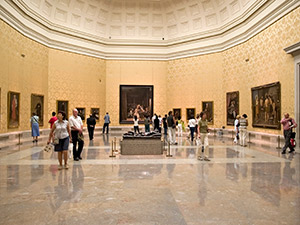