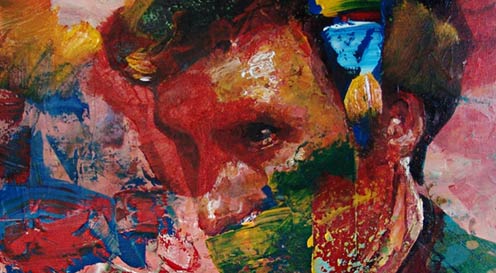 facets of the semi-abstract face

Jouandet is a painter working in Valence Drôme, France. For collectors he is one of the best kept secrets outside France and Canada. However, it is quickly changing, and it is all to do with his semi-abstract portraits.

See in the not-too-distant past art critics felt uneasy about dealing with portraits of celebrities. Particularly, in the days when the novelty value of Warhol’s serial ‘Marylins’ wore out, and art had to shock, and teach us to abhore beauty. For the record, either one end of the polarised scale is justified by us — as is everything in-between.

But then entered Elizabeth Peyton, a reputable, and formally trained artist who defied the prevailing dogma and championed the celebrities. Along with her exagerations came increasing focus on high-gloss cult images in the tabloid-media. Arguably, with Peyton’s and Jouandet’s work, there is a fine line between offering something kitsch, and adding some other dimension. Jouandet’s work falls into the latter category with the caleidoscopic feel he adds to each piece. The art has impact and is stripped of any sense of sentimentality.

Rémi Jouandet is quite indifferent to what goes in an out of vogue with art critics. He caries on with timelessness as an ideal. We all alight a fashion train at some point in our lives. But sooner or later we decide to jump off at a station, and watch the train return ocassionally.

Although he has many influences today, it turns out that an exhibition of Bacon’s work was a defining break-through for the way that the artist decided to approach art.

There is method in the madness

Often Jouandet works on two to three canvases simultaneaously. He prefers working in acrylics, and mainly because the paint dries quicker and helps him keep a speedy momentum.

What’s quite characteristic for his art is his ability to work quite loosely to begin with, then follow on with more controlled and conscious strokes. Although he excels in drawing, he seldomly sketches, but works his way into the canvas until a few accidents lead the way.

According to the artist himself, he begins with abstract painting. Then from the abstract expression emerges opportunities for beginning figurative work such as portraiture. The result is a vivid and contemporary experience, which does have some parallel to German expressionists for the vivid palette. In addition the art creates visual a sensatation by letting neighbouring colours blend together in the eye at a distance rather than on the canvas itself. The latter is something that the pointilist Georges Seurat explored but really never took any further than his constrained world of dottiness.

Art in the great incubator

For the figurative work he uses his memory, photographs and imagination. E.g. Dorian Gray is Jouandet’s own composite vision of what the Oscar Wilde character ought to look like (CF picture galleries to the right).

Another striking piece is a protrait of Italian-born French actor Lino Ventura. The painting co-exists with another portraying Jean Gabin, who was Ventura’s side-kick in a few French movies.

By the artist’s own admission, his studio is not a pleasant place to work. However, it helps keeping focussed on getting the job done. In the studio he shifts between ongoing work on several canvases. While it sounds chaotic at first, it helps free up the process and allows ideas to incubate before returning to canvases to implement them.

Another advantage is what he terms the ‘veto mode’ which is the more rational and clean-cut decicions you make when some time has passed. That is, when you have just invested time and energy on creating something, you are much more likely to be emotionally attached to it, and that even if you would otherwise have painted it over two days later.

You can find more about the artist at his own website. 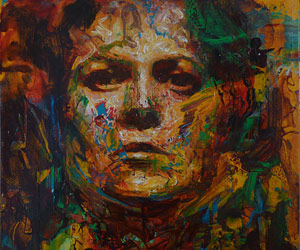 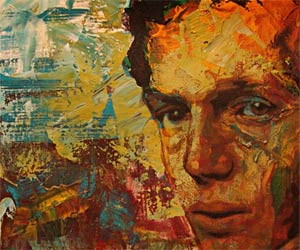 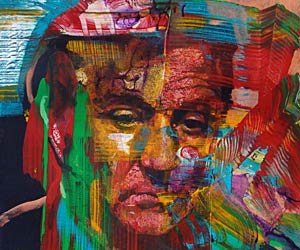 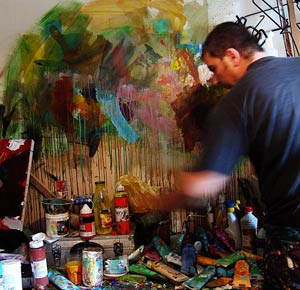