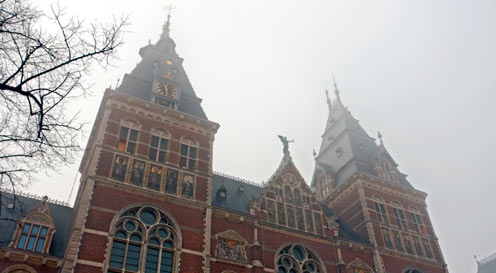 the old heart of dutch art is tickety-boo

With a record-breaking 2 million visitors within the last 9 months of 2013, the recent overhaul of the museum appears to have paid off. After having been completely closed to the public for 10 years and renovation work costing €375 million, Rijksmuseum opened to its present glory on 13 April 2013.

Just before the renovation, the Dutch created a ‘mini-Rijksmuseum’ in the international Schiphol airport with their ‘business as usual’ attitude. It has been a success ever since and now the main site is open again, this satellite is going to stay. As for the reopened main venue, all art aficionados new to Amsterdam will delight in the location of the museum. Rijksmuseum is situated at the museum square in Amsterdam, which makes it conveniently close to the Stedelijk- and the Van Gogh Museums respectively.

Along with the Frans Hals Museum in Haarlem, the Rijskmuseum in Amsterdam commands a specific role in European art history. As official ‘state museum’ of the Netherlands, it is the place to find works of art from the Dutch Golden Age. Art from this period is significant for it great virtuosity and technical accomplishment. But it is also characteristic for its diversity in the choice of topic matters owing to a democratisation in the sponsorship of arts. A new mercantile elite had risen to power, and they began to buy art en masse. Before then, art collecting used to be a luxury that only churches could afford — the result of which is that only religious motifs were being commissioned. In that respect, the museum captures a period and place in Europe that is the cradle of contemporary art as we know today. If that perspective is a tad heavy on you, simply take in 2000 paintings and enjoy masterpieces by Rembrandt Harmenszoon van Rijn, Frans Hals, Johannes Vermeer, Jan Steen, Jacob Isaakszoon van Ruisdael.

Either way, there are two excellent works that are as famous for being famous as they are for being exquisite. The first one that many make a b-line for is the Milkmaid. I.e. an oil painting created by Vermeer between 1658-1560.

More famous again, is the painting The Night Watch by Rembrandt from 1642. Paradoxically, the canvas does not depict a night scene at all. But the tan of patination on the already dark painting is said to have led to the name, and then it has stuck to the public conscience ever since. It is also known as the Civic Guard Portrait and for the Dutch at least, it represents no less than a national symbol. Simply, the depicted ‘Dad’s army’ militiamen are clear references to Dutch independence from Spanish rule. The latter, combined with the Rebrandt-esce ambience, explain why the huge job commands it’s own dedicated gallery space within the main building at the end of the Gallery of Honour.

Dutch Golden Age painting is just one of many things that the Rijksmuseum has to offer. The Staff are custodians of more than 1 million objects altogether. Like with many other national collections around the world, the public will never see more than a fraction of it all.

The museum has a progressive solution to the issue. It makes approximately 125,000 high-res images available for download. Moreover, it plans to add another 40,000 images per year until everything is available for everyone in picture form. It addresses a popular debate you can read more about here. In the meantime, rest assured there is more than enough to take in whilst visiting. The museum comprises of 80 neatly curated galleries exhibiting 8000 objects, which in turn help contextualise 800 years of Dutch art within the history of the nation between 1200-2000. It does not prevent a delightful Asian art collection from being on permanent display in the Asian Pavilion. In terms of art history, this area of interest begins to make sense when you consider the geo-political role that the Netherlands played in European trade with Asia.

In its recent incarnation the Rijksmuseum has finally addressed a gap in art from 20-and 21st centuries. Hence, it is now mounting modern and contemporary art in its exhibition. The collection is still modest here, but is augmented by loaned exhibits from other art spaces. To make all this possible The Rijksmuseum has cleverly fostered close relationships with sponsors such as Philips, ING, KPN and BankGiroLoterij.

The original interior courtyards have been redesigned to create a new entrance space of the Atrium. Glass roofs and light, polished floors help reflect the daylight give the Atrium a light and airy feel. It is a welcome addition that does not steal attention from façades of the surrounding main building, with their many windows and architectural details.

The Gallery of Honour is a long corridor directed towards the aforementioned Night Watch Gallery. On view in the side alcoves are masterpieces by the great artists of the seventeenth century. The alcoves are framed by cast iron beams inscribed with the names of the famous painters. Semi-circular wall sections above the exhibition displays the coats of arms of the eleven provinces of the Netherlands.

The Night Watch Gallery was specially designed to display the civic guard portrait – It is certainly one of the better Rembrandt paintings about, and it was painted at the culmination of Rembrandt’s artistic career. The sculpture in the same gallery includes a number of gilded female figures better known as ‘caryatids’.

New at the Rijksmuseum are the galleries dedicated to the twentieth century. Featuring paintings, furniture, photography, posters, films, historical objects and even an aeroplane from the Rijksmuseum’s own collection, the displays also include important loans from museums in the Netherlands and abroad. Together, they create a window onto the cultural history of a modern country during the last century.

In the nineteenth century, the Netherlands became a kingdom – and became an increasingly well-oiled industrial machine and international exporter. Dutch painting was liberated from Photographic realism, by the advent of photography, and it evolved into more individualistic approaches to art within mega-trends in European art in this century.

Relinquishing some of its interests abroad, The Netherlands was no longer a world power and naturally chose to redefine its identity accordingly. The socalled Golden age was over, and Citizens invested their profits in the property market securing their own bricks as it were. In other ways the attention turned inwards, and the interior design became a Dutch passion. The result was well-crafted objects, and personal portraits.

Thirty plus galleries are devoted to the Dutch Golden Age at the Rijksmuseum, It reflects a time when Dutch merchant republic enjoyed its heyday as a dominant player in world trade. It funded science, learning and fine arts like never before. The heart or engine room of the museum is the spectacularly restored Gallery of Honour particularly dedicated to art from the period. It exhibits world-famous works by Johannes Vermeer, Frans Hals, and Rembrandt.

The early Middle Ages were about Christianity and very little else it would appear. That meant that art and religion were inseparable and it shows in the art collection. However there is a notable turning point in the fifteenth century when a renewed interest in Classical Antiquity emerges. The subsequent Reformation and worldview of the Renaissance slowly but surely distance art from solely religious depictions.

The Cuypers Library is the largest and oldest art historical library in the Netherlands, and perhaps a close relative to the Reading Room at British Museum. After intensive restoration, it is now looking spectacular. Nineteenth-century library’s reading room is open to visitors, students and art historians to emerge themselves in art and history. iPads are available and there is free WiFi access in the library the same way it is throughout the museum.

The pavilion houses a small collection of Asian art brought together from China, India, Indonesia, Japan, Thailand and Vietnam. The collection comprises of art from 4000 years of history and harks back to 2000 BC. The pavilion is designed by the architects Cruz and Ortiz is constructed from Portuguese sandstone and glass. Water surrounds the building offering it an unusual architectural touch.

The new Rijksmuseum’s has a stronger emphasis on historic drawing school known as the ‘Teekenschool’ and proudly uses it as a multidisciplinary education centre for visitors of all ages. The old school is housed in a separate building to the main building. After the renovation the Teekenschool has regained its original function of being a place to educate yourself artistically.

The history of the Rijksmuseum

We ought to thank Isaac Gogel for the existence of the museum, and his ambitions to match the Louvre in Paris. As finance minister of the, then, republic; Gogel was indeed an unusual suspect for campaigning for a publicly funded national museum. But he did so for three years, and in 1798, the government voted in favour of the museum.

The museum was originally a collection of royal bits and bobs situated in The Hague. But as the political and commercial influence shifted towards Amsterdam, so too did the collection relocate in 1808. However the direct orders, to relocate came from a French national, namely Napoleon Bonarparte’s brother. He had considerable clout in the light of his brother’s victories proclamation of Kingdom of Holland in 1806

The first home to the art collections in Amsterdam was the Royal Palace. Then followed by a habitat called Trippenhuis between 1817 and 1885.. Finally, the Rijksmuseum moved into the main building that we now associate with the museum today. The architecture was designed by Pierre Cuybers, and the museum exhibitions opened its doors to the public in 1885.

Related article: The Rijksmuseum wins the EMYA – European Museum of the Year Award

Family guided tours, ask at the Information Desk in Atrium 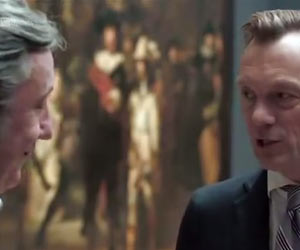 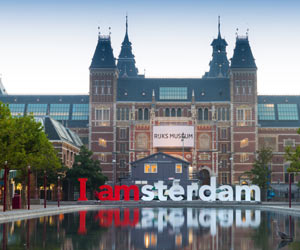 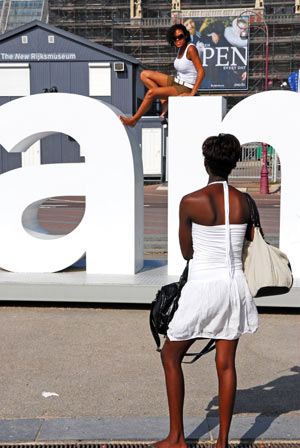