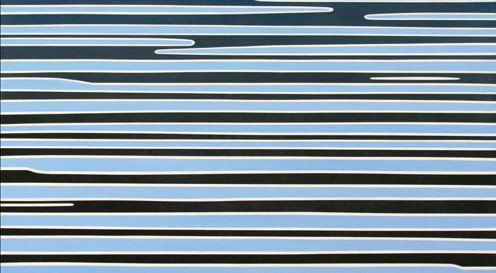 nature abstracted to its intrinsic rhythm

The painter works on canvasses using both oils and acrylics. In the process, the artist boils landscapes down to their very essence, and the resulting planes and colours create somewhat abstract compositions where the constituent parts are signs, symbols or notes. The starting point can be anything and everything including cycles of reeds, flowers, old buildings, horizons. The part of departure, if you will, is what Alex Catz terms ‘fast read’ as achieved by bold simplicity and uniform colour zones. In between the two you find the artist’s own mental process.

Jackson Pollock was once asked if he used nature as inspiration for his work, to which he famously responded, “I am nature!”. Same thing is true for Motelski, except the link to nature outside one’s self is never broken:

I’m interested in the rhythm, order and peace of nature. I always start with a study of nature. I transform fragments of reality, removing inessential elements, strengthening the ones which are necessary to me.

He carries on to say that “It is vital for me that the public know what the painting presents, which is not always simple at first glance. That is why I entitle my works depending on the cycle they belong to. I give the exact date­ the day, month, time. This is not the time when a picture is being created but the time when a given situation, light, colour, composition could have occurred.”

Robert Motelski (b 1977) graduated from The Art College in Warsaw in 1997. In 2002 he graduated from the painting department of The European Academy of Arts in flying colours. Since then he has not wasted a moment, and has taken part in hundred solo- and group exhibitions. His art has been acquired by private collectors in Austria, England, Belgium, Holland, Sweden, Switzerland and USA.

Motelski has been awarded two artist stipendia so far. The first one was the scholarship of the Art Promotion Fund granted by the Ministry of Culture in Poland in 2004. The second was the “Młoda Polska /Young Poland/ scholarship awarded to him by National Culture Center in 2008.

You can find more infomation about Robert Motelski and his art by visiting his website. 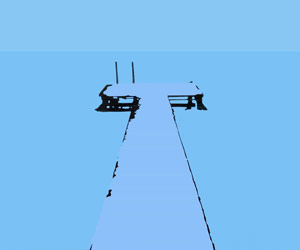 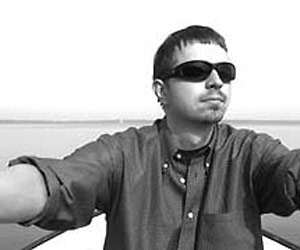