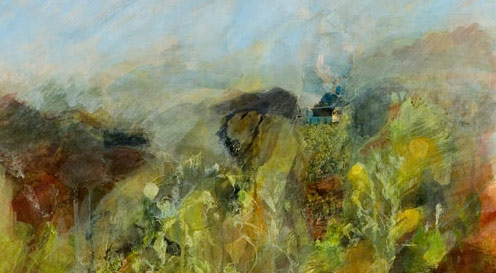 Rolf Engfelt is an artist based in Limhamn, Sweden, and works from his studio in Malmö. Here he enjoys working on several canvases and prints at the same time.

Squinting helps greatly when you approach his work. A characteristic trait of much of the artist’s works is that it has a certain playful haziness. For anyone suffering from myopia, it is a little similar to that interplay of blurred colour experienced just before you’ve located your glasses on the bedside cabinet in the morning.

It is highly suggestive because the drama is right there under the surface, but it does not slap you right in the face. In turn this is achieved by working wet-in wet, but also through tactical use of semi-transparent washes built up over time. In the process some contours are deliberately diffused in a spumato-like way suggesting movement. Other areas again, appear to have turpentine burns to create shimmering transitions between contrasting colours.

The art is inspired by what’s right outside the window

Engfelt once reached the conclusion that Nature had very little new to offer that had not already been used and abused in art many times over. But in his later years, he has come to terms with the fact that nature happened to be the main inspiration for many of his semi-abstract compositions. Once he accepted that, the floodgates simply opened and he enjoyed a burst of creative energy that does not seem to disappear anytime soon.

“As you cannot possibly depict the total complexity in a given experience of nature”, says Engfelt

“I enjoy the process of reducing the essence of a landscape to its bare essentials in a few steps.”

By dissecting and testing the creative and emotional merits of each, he then reaches a point of departure, whence he can reconstruct the elements into an effective composition.

And why not nature? Take for instance the daylight, which is always a mixed bag indeed. During the summer the sheer intensity and long hours of sunlight never fails to send your mood on an all time high. In turn, this is contrasted with a near absence of light in the winter.

Between those two extremes, you experience spring and autumn as turbulent times in which the warm appears to be in a constant fight with the cold for supremacy.

The former is exactly the light of the north. If we went pseudo-scientifically about this, and scanned famous Scandinavian art followed by creating a 256 indexed palette in Adobe Photoshop, something remarkable would appear:

Not only would it all appear a little dusty. But there would also be a heavy import of Pale Greyish-blues. This would be accompanied by earthy tertiary colours plus small sprinkles of bright colour in the top half. The bottom half would then be a large sea of subtle warm greys and greens. Think Anders Zorn and Oluf Høst and his Bognemark studies. This has also been captured by art colonies in Oslo, Skagen and Gudhjem in the 20th century; and the result is becoming increasingly attractive in auction houses. Whether we want it or not, it is the subtle tonality or gradient between colours

The Scandinavian light profoundly affects how you observe nature and how you view life. You literally feel a year by the sharply defined seasons. You do so in a way that you would never do in the tropics. In all this, Engfelt provides us this otherness, which is best summed up as one part individuality and 1 part Swedish DNA. What is the latter? Well, as an outsider to the Swedish vibe in visual arts, music and cinematic drama, the term proves elusive. However, it is the act of treating melancholy with dignity and beauty. Examples are music such as Jan Johansson’s Emigrantvisa. It is the near mono-chromatic look and feel evident in the Swedish crime fiction now invading our screens. It is the architecture and design simplified to an esthetic dictated by ‘form follows function’.

Rolf’s art education is a selective amalgamation of art courses from Lund University to non-accredited short courses. It contrasts the regular bachelor degree in fine art so common in the US and the UK that offers A a democratic approach to nurturing talent. In Scandinavia, however, Engfelts pedigree is not that unusual. There you have the very few who go to Royal Academies, and then you have everyone else who eventually succeed through hard grafting, extensive self study and modular courses (cf Thomas Kluge).

Engfelt has been represented at local galleries and has many solo and censured group exhibitions behind him. Being an active member of the Swedish art group KSV-konstnärsgruppen, Engfelt is part of a uniquely Swedish concept of artists opening their doors to art enthusiasts every year. The interaction not only engages society in art, but the dialogue is also useful for all artists involved. 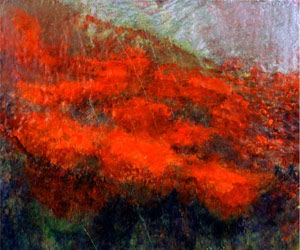