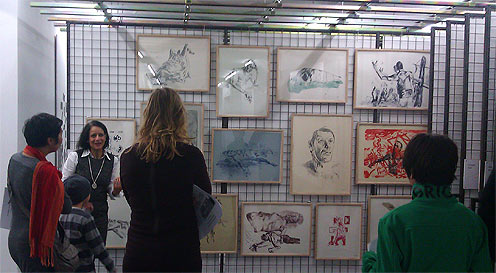 If you haven’t been already, do yourself a favour and hop along to see the Sammlung Falckenberg in Hamburg, Germany.

To sum the experience up in one sentence:

It is not what anyone expects before visiting

First off, the collection is situated within a grade A listed factory. Arguably, it is a fabulous setting, but an unusual choice nonetheless. Secondly, viewing is by appointment only. It means you have to book in advance. On the upside, however, you’re being guided by a member of staff who is not only passionate about the job, but is also a fountain of knowledge on the works of art.

In total the Falckenberg collection comprises of just under 2000 pieces of avant garde art. A few pieces might not be deemed healthy for children, the faint hearted or those easily upset. But this lot – bless their cotton socks – have probably seen it all before. Either way, you have a very interesting take on what has happened in the past 30 years, and the latest acquired pieces are bang up to date.

The collection is housed in a 5-storey building and occupies an impressive 6200 m2 of exhibition space. Much of the collected art is stored in the basement and ground floor whereas contemporary exhibitions are to find on the other levels.

The collector Harald Falckenberg commenced collecting art in 1994, and since then he has concentrated on hunting down works, which offered a more critical response to society.

You can come down with hunting fever all of a sudden

Falckenberg’s immersion in art is legendary. It began when he turned 50. From knowing very little, he ended up being an erudite collector and went on to co-author several books on contemporary art.

The psychology of art, artists and art custodians

Old Harald has attempted to explain his act of collecting by referring to Sigmund Freud. The father of psychoanalysis assumed that collecting is emotional compensation. A way to cope with ‘decreasing levels of service’. Be it stamps, teddybears or something third, a collection is a child’s way of detaching himself from his mother, who in turn cannot continue to nurture and protect full-time forever.

In addition, Falckenberg thinks that good art is the product of artists having neuroses. The latter is being alleviated by the creation of art. Rather interestingly, Falckenberg has also ended up thinking that the works of art are secondary to him. What is more interesting is the artist and what s(he) has to say.

Focusing on European and North-American art, the collection is also engaged in sub-themes within societal criticsm. One is the geopolitical criticism of the Iraq war by Jon Kessler in the form of the a large mobile and video installation.

Another theme is contradictions of terms. E.g there is a concrete zeppelin at the top flight of the building. Rather than going down as a lead balloon it makes you reflect on the irony of so much of the WW1 military ambition being pinned on it – not to mention the later Hindenburg disaster.

Monday-Sundays except on public holidays

Some publications on art are for sale 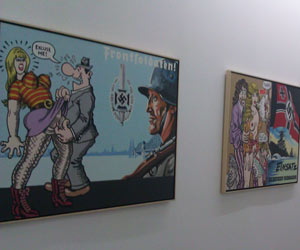 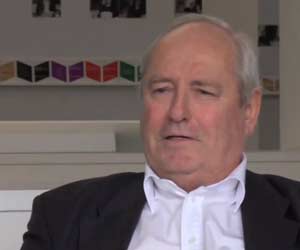