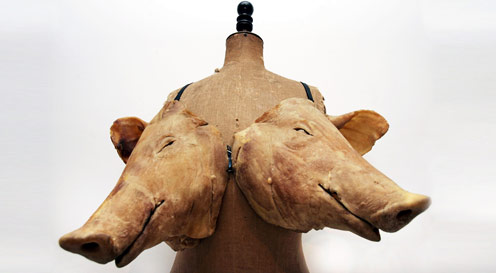 Shock art is much more a type of contemporary art than a movement per se. In recent history it has been tied to the ‘Sensation’ exhibition by Young British Artists at the Royal Academy of Arts in London in 1997, and following on from that, much of the conceptual work from the YBA generation appears to have been labelled accordingly. However, it is arguably any art from any period in time that appears to shock.

Art of the shock may incorporate sensory inputs that are disturbing and shocking to some people. In some cases the artist intends to push the envelope of the three Ts: Taboo, Taste and Tolerance.

The resulting art demands our attention with or without embedded social commentary. As a common denominator, the art is rarely intended to be beautiful; though in some cases beauty itself is used unnervingly when representing a topic so horrific that the contrast creates an uncomfortable fusion. An example of the latter is the greyscale large format painting ‘Myra’ by Marcus Harvey. Like a photographic raster print, the painting is made up of dots of children’s handprints. The context was aptly chosen. At the time Myra Hindley was campaigning to be released from prison where she served a sentence for murdering 5 children together with Ian Brady between 1962- and 1965.

Unrelatedly, and in the lighter end of the shock scale, there is the notion of what constitutes art at all. Here Duchamp and his ready-mades have kept the debate going for a few decades until everyone were won over by the point it was trying to make. So in our post-modern society, anything someone labels as art clearly is art, and that is all dandy.

One of the three Ts

Shock art commonly addresses taboos. Surprisingly, any confrontation with our own mortality tends to push the right buttons in western societies. More upsetting to our public conscience, however, are wrong-doings to humans and harm to animals. What society thinks is on the edge of the perverse is also a perennial source of inspiration as is  genitalia or what comes out of our orifices. It is no surprise then, that Tracey Emin has used her underwear with menstrual stains in her Turner prize winning installation ‘My Bed’.

While shock art performs an important role in our society, and currently helps China become more of a culture that entertains healthy debate, it can also feel awfully contrived at times.

Seasoned art critics are a little cynical about the novelty value of something that is not that novel after all. They go on to call it the safest art that artists could possibly make. This is because as soon as the artists do something that creates a media frenzy, they have a marketable career of collectible output bought by the likes of Gagosian, White Cube and Saatchi. And all without adding any other artistic merit to the equation. If that has a kernel of truth in it, then shock is sometimes reduced to being the placatory gimmick on the real gimmick.

If nothing else, those who cannot think or read too far back will recognise that much of the relevancy of both ‘shock- and conceptual art is tied to the dadaists and the work ‘Fountain’, a urinal exhibited by Marcel Duchamp in 1917. But art has shocked throughout history and that is an important part of its merit. Its self-perpetuating nature has upset religions and changed – and in some respects relaxed – our attitudes to sex for instance.

Certainly, much of what is considered shock art in one culture has already been tried and tested in another.

At the same token, sliced and diced animals in formaldehyde do not constitude something revolutionary by Damien Hirst. The same goes for his $12m decaying shark called The Physical Impossibility of Death in the Mind of Someone Living. In 1970, i.e some 30 years before, the Danish artist Bjørn Nørgaard performed a ritual killing of a horse and exhibited the resultant parts.

Tracey Emin’s knickers may upset a few innocent Brits or send them snickering round an exhibition, but it has some parallel to Artist’s Shit by the Italian artist Piero Manzoni. In 1961 Manzoni dropped his excrements into tins and sealed them as part of his contribution to art.

In the nineties China there was a proliferation of art that shocked locally, but which we merely would consider pop art in the west.

Remarkably, China soon left this fad behind and evolved into something far more clever in terms of contemporary art. In some cases Chinese artists were braver, more sinister and shocking than their western colleagues. But they have three more Ts to consider: Taiwan, Tibet and Tiananmen Square making them fire on all pistons. When talking about shock, the ‘eating people project’ of artist Zhu Yu springs to mind. A stolen dead foetus was part of the controversial Fuck Off exhibition of contemporary artists as curated by Ai Weiwei and Feng Boyi.

Leaving China for a second, self mutilation lends itself as well to shock art as any of the previous examples. Forget Me Knot from 2012, is a work of art in which Sruli Recht documents surgery on himself where a plastic surgeon removes a thin 1m long strip of skin from his abdomen. The piece of skin with the hair was tanned and mounted to a gold ring.

Finally, Shock art can be part of an ongoing quest to raise awareness about the holocaust, the abhorrence of the Third Reich and any harm to children as a whole. Gottfried Helnwein recent Dreaming Child body of work fits the bill as does his famous Adoration of the Magi II in which he displays a Hitler-looking infant as baby Jesus.

Image credits:
Top: ‘Pinky and Perky’ by Carrie Reichardt part of a collection of work from 60 finalists entered in the “BlindArt: Sense & Sensuality” competition, the UK’s first annual awards to create art that can be appreciated by the visually impaired that can be touched, heard and smelled. 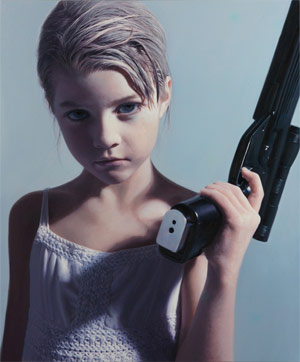 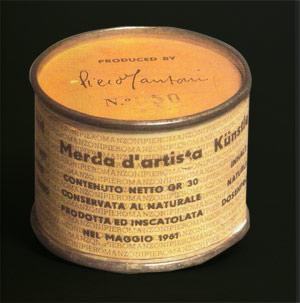 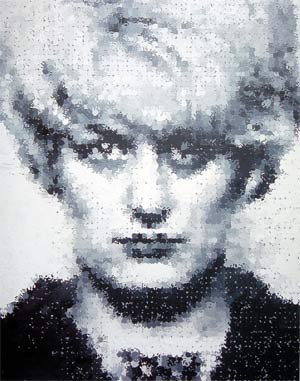