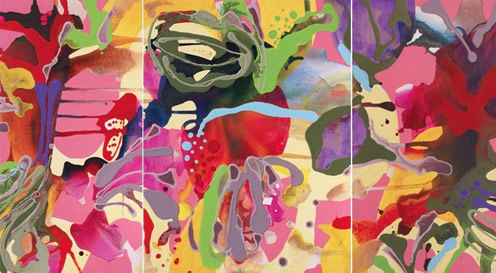 It is always a pleasure to come across an artist who is not allergic to colour, is established; but who dares try out new stuff, whilst at the same time manages to stay attractive to collectors without effort.

Speaking of Siegmann, we don’t know what she is having for breakfast — we just know that we want it, and that we want it now. Her art certainly has a vitality about itself that is hard to resist, and it all comes down to the shapes that appear in her work. They are simply sweet, vibrant, assaults on our senses.

It is as if pods full of thick coloured gel have exploded in front of our eyes. Only few seconds later, and we begin to modify this daft hypothesis. Does it include a series of semi-controlled mini explosions with fuses of varying lengths being ignited?

Then, of course, we quickly establish that there is nothing semi-accidental or semi-whatever about the act. The works are the sum of very deliberate stunts of both harmonising and contrasting elements until they work as a composition. Bang as it may say, then, the art clearly displays great sensitivities as well.

The artist works across several media either for variation or for the sheer hell of it. She paints acrylic on canvas, and sometimes as triptychs such as ‘Xenia’: the one above that has been butchered up by our publishing platform. She also produces sculptures, and has worked on a mural in Germany which didn’t turn out half bad.

The titles are whimsical – but in a positivily unpretentious way where you sense an undercurrent of dry humour. E.g.’ A dress exposed her well-trained arms beautifully’ or ‘It’s been three years’. In addition, the aforementioned mural was called ‘I spy with my little eye’, and a mosaic bench sculpture was aptly termed ‘sit here’.

Like many artists before her, Sofie Siegmann is a migrant at heart. Born in 1964, she spent her childhood in Germany, then her youth in Swizerland where she attended Zürcher Hochschule der Künste (ZHdK). Later she served a two-decade-long stint as an artist in the US, and now, she lives and works in Swizerland again.

Her track record is pretty good. Here for instance, you can view a long list of international solo- and group exhibitions that she has participated in. In addition, she has been involved in funded community projects bringing people and art together. You can read more about the artist at her own website. 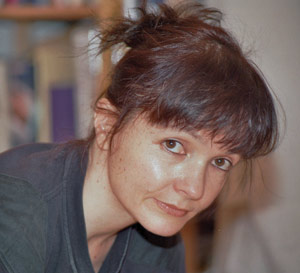 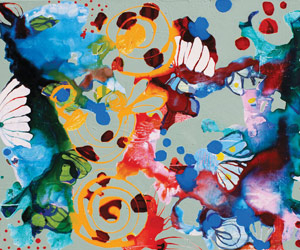 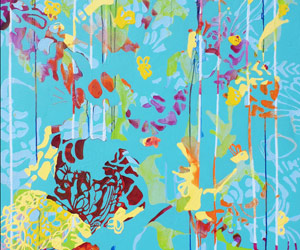 You could hear a petal drop 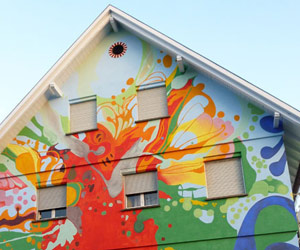