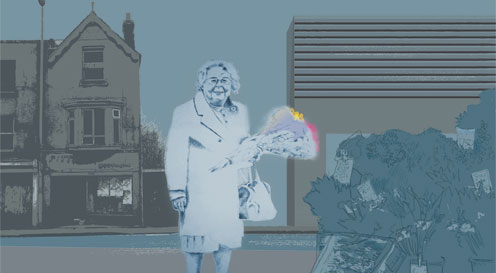 The beauty of mundane realities

For art to be hyped in the media there is an unwritten rule saying that you must do something which has never been done before. But Podolski, however unique an artist, is perfectly fine with having nothing to says about the human condition that has not already been said many times before. Art for the art’s sake can be really contrived, and since when did it become so unfashionable to depict beauty?

The modern world tries to dazzle us with shiny things and fantasies of glamour and success; my work tries to focus the eye and heart back on to the mundane realities of life and remind us that they’re beautiful and profound.

The characteristics of Podolski’s art

The result is a poetic mix of everyday situations, but often with an undercurrent of irony borrowing elements from our increasingly urbanised and commercial society. If you reside outside the UK, you will also notice probs and details, which are peculiarly British. When you spot these homegrown artifacts, the experience is a little like when Nic Park chooses to let Gromit knit a green sweater or finds time to cover Wallace’s fetish for Wensleydale cheese. Arguably, those ingredients are uneconomical for building up the characters, but once they are in, you really do not want them out again.

How the art happens to happen

His approach shows evidence of someone who naturally knows when to switch between being highly controlled and working loosely. He fills up sketchbooks whilst observing people. He collects these visual memories like a squirrel, let them kick about in the studio for a while, and occasionally returns to some of them. Then he combines various elements including flat colour areas for emotion and depth. Sometimes he does so to recreate from memory a particular scene almost as it was observed. Other times the compositions are far more constructed in aid of the narrative. In this process, chance itself creates welcome input to the compositions. Together with the joy of working this way, the intended – and the less so – creates the art by itself almost.

He particularly likes the street photography of Saul Leiter, and Nils Jorgensen, but is also influenced and moved by the expressive style of John Eagerton Christmas Piper. In addition, he likes the painter Vilhelm Hammershøi, though, arguably he falls a little out of the context of the others. But then again not. Hammershøj captured his models with a certain tenderness whilst at the same time capturing his characters in pensive moods – as if no one else was present.

Stephen Podolski lives and works in Stroud, a Gloucestershire town he lovingly refers to as a graveyard for ambitions. Life there is just too good, and it is the perfect place to live if you want to focus on art.

Stephen has a Masters degree in Visual Communication from the Birmingham Institute of Art & Design and has worked as a designer and illustrator for the last twenty years. 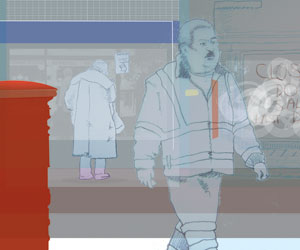 Closing down, © Courtesy of artist and gallery 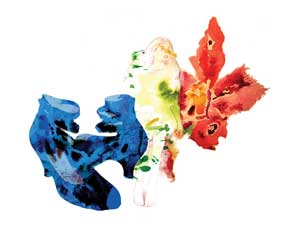 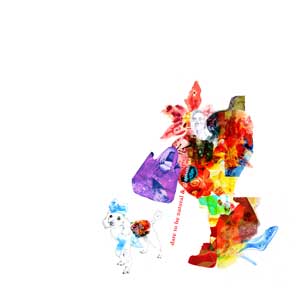