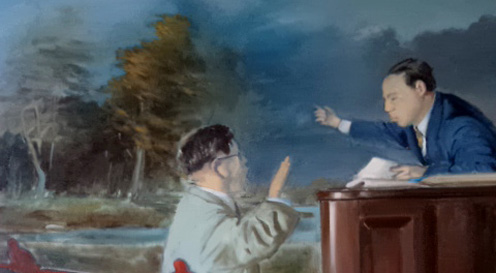 The British artist Steven Doffman, who now lives and works in New Zealand, is behind some baffling and strongly charged images that can make you feel like a fly on the wall observing warped reality.

Doffman has been into art all of his life, and he received his formal art education as early as the 1970s. In his student years at Goldsmiths in London, he focused on photo montage, because it could create a dream world with the believable authority of photography. Of course, lots of water has run under the bridge since then, and Doffman has not rested on the laurels, but has worked across several media. Slowly but surely he one day landed on both feet in painting. However, in this development there has been a common thread. Call it the artist’s exploration of the absurd and the vaguely unsettling as a psychological drama played out on a stage.

What to say in defence of such allegories? Quite a lot. Arguably, there is more than enough reality go round to all of us. So why not capture what our imagination produces and share it? It seems scarcer and more precious somehow.

It resonates with Pascal Mercier’s novel Night Train to Lisbon, in which the fictional character Raimund Gregorius attempts to crawl into the mind of a deceased author via his words. Gregorious soon realises the limits of inhabiting someone’s cognitive constructs, whilst chewing on the words Imagination is our last sanctuary.

I like to compare [my art] to trying to read a page of text in a dream – the words simply don’t form clearly. That is to say, there are no literal messages. Over the last decade or more, I’ve departed increasingly from the possible to the improbable and like to occupy an area just beyond pictorial illusion.

As alluded to before, the paintings followed the photo montages chronologically. This was out of a pragmatic need to find a standardised, unifying medium that could make use of a diverse source materials. Again there was a desire to present a convincing illusion. To begin with, the initial style was highly crafted acrylic paintings. But 10 years ago Doffman managed to break free from it. It coincided with a return to life-sized oil painting, and it began to liberate his art from the slavish detail of the former acrylics. In this period, Doffman also acquired a far more relaxed and utilitarian view on photo montages. Now this laborious image-sifting technique was no longer about finding the perfect single elements, as much as it was about producing sketches for paintings. Either way, the works have never been planned as neatly organised series, and each piece continues to be regarded as a stand alone-piece that encapsulates something the artist wanted bring across at the time.

An amalgamation of diverse influences

Steven Doffman has not only moved far with his approach to art, but has also been highly mobile geographically. Bahamas, Scotland, Germany and Japan became habitats and acted as welcome – and at times involuntary – sources of inspiration. One thing is physical re- or dislocation. Another is that no artist can live in a self-contained vacuum.

“If I were to list influences, it would include Glenn Baxter (my Goldsmiths lecturer), John Heartfield, Max Ernst, Edwardo Paolozzi, Robert Rauschenberg, Edward Hopper, Neo Rauch and Michael Borremans.”

The artist has taught art in Scotland for several years. It may sound exciting to some of you, and downright trivial to others. But the surprising and perhaps unfair thing about teaching, is that you learn far more than the people you attempt to educate; and it has a simple explanation: We all know that we are thinking, but the questions that arise from student dialogue expose both how we are thinking, and why we are thinking the way we do. It all lends itself well to a parallel career in fine art.

It goes some way, at least, to explain why the artist’s work has this street-wise quality to it. In its Kafka’esce composition, it is like a recorded time stamp from someone who manages to stay emotionally detached. A documentary trait that you come to like — even if you can’t explain why.

You can find out more about Steven Doffman by visiting his website today. 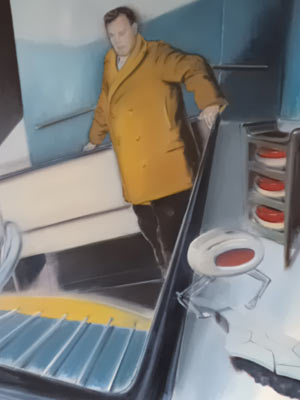 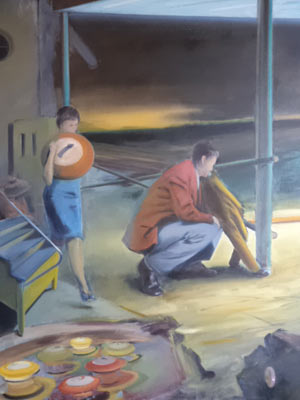 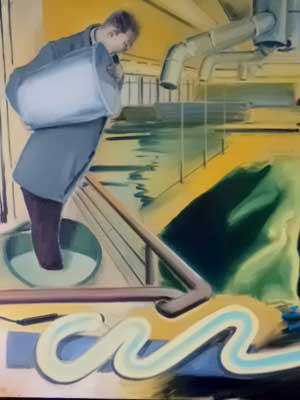 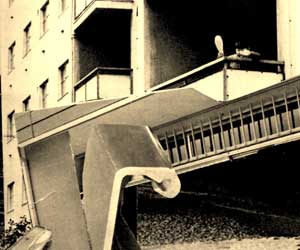