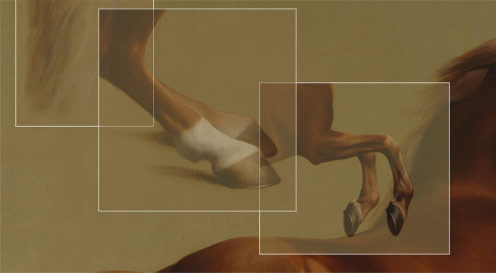 Whistlejacket is an oil-on-canvas painting from 1762 by the British artist George Stubbs showing the Marquess of Rockingham’s racehorse against a neutral background. Measuring 292cm × 246.4cm (115 in × 97 in) it is quite close to being life-sized. Here Stubbs has depicted Whistlejacket rising to a levade, except that it has its head turned towards the viewer to invite more interaction between the viewer and the canvas.

The stark simplicity of this composition is part of its appeal. Except for some discreet shadows the horse itself is very much isolated, and in complete focus where ever you look. The uniform background is unusual for its age, in that an artist would have felt compelled to add a landscape not insist on this honey-beige void. This characteristic has been subject to much speculation by art historians drawing upon circumstantial evidence and the anecdotal reference to a stable groom being scared off by the convincing illusion of a rearing horse. To us the composition appears surprisingly contemporary — almost in keeping with something a pop artist could have done.

The scientific butcher of Lincolnshire

No other artist has painted equine portraiture with such anatomical and visceral precision. It is even subtly and selectively accented to a point where photography could not achieve quite the same today. It is no coincidence. It took Stubbs years to specialise in horses. From 1756 he spent 18 months in Lincolnshire dissecting horse cadavers whilst sketching the process. The stench was unbearable and sickening not to mention a health and safety hazard to the artist. But the time and curiosity invested in this exploration more than paid off later on.

These studies speak volumes about artist dedication, but is missing an important line of enquiry entirely. Andrew Graham-Dixon is perhaps the only art historian who has spotted the significance of Stubbs comparing these drawings directly to the skeletal and physiological composition of man.

According to Graham-Dixon it is as if Stubbs thought to himself: “if we are made by some deity to be superior to these creatures, how come our inner mechanics are so similar?”

What is remarkable here is the fact that George Stubbs made those observations nearly 100 years before Charles Darwin formulated his theory of evolution (1859), and that is why we consider whistlejacket a conversation piece in the modern sense of the word. It was ahead of its time in more than one way.

Painting of animals has always occupied a lowly place in the hierarchy of art genres and nearly always labelled low brow and sentimental. However, George Stubbs realised quite early in life that there was a commercial demand for equine art, and decided at a personal level that it was as fine an art as anything else we term fine art today. The proof is perhaps in the pudding. The Fitzwilliam family, heirs of Rockingham kept the painting until 1997 when funding from the Heritage Lottery Fund enabled the National Gallery to acquire it for £11 million. Today it commands your attention at a prime spot in the permanent collection at the National Gallery. 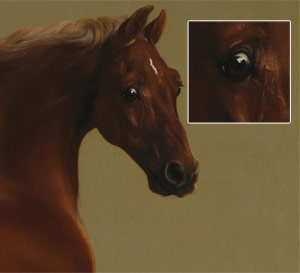 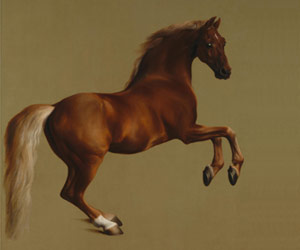 View the entire painting in the correct aspect ratio