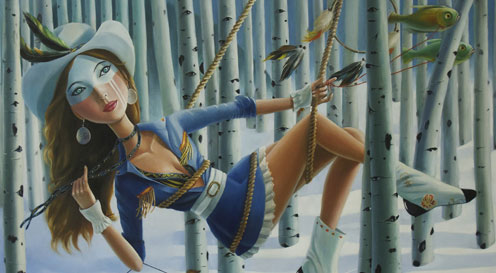 The artist Terri Duan is significant for a highly individualised flavour of art that manifests itself in canvases depicting dreams of sorts. Dreams, of course, have been a rich source of inspiration for many artists throughout the ages, not least the surrealists who with well meaning art historians have succeeded in monopolising the concept. The latter have done that so well that there is little oxygen left for anyone carrying on using their own lucid dreams in their work.

These works of art could at first glance be accused of being sentimentalist pieces, because they are so awfully nice and pretty. Then you might notice that there is a sort of philosophical therapy going on here. These compositions of dreamscapes bring in Duan’s past, and nearly always involve a female character.

In the end the works prove as sentimental as a dishwasher at closer inspection. It is because they are intended to be antidotal reflections on the the artist’s past and present.

In fact they are Terri Duan’s mockery of the shallow and glib charm of fashion. That this crops up in her conscience is no accident. Before Duan became a fine artist, she obtained her formal education and subsequently worked in fashion. As such the paintings reflect an insider’s take on the lack of substance of an entire industry. That is the a near-totalitarian world hellbent on making us feel we have lost our sense of identity unless we are wearing the latest.

As such the works utilise a visual vocabulary that is anything but accidental. The portrayed characters are almost puppets with invisible strings, or simply stupid pretty plastic dolls. Look for instance at the elbows and wrists, and they might as well have been standard issue parts of a Barbie. On one of her paintings there is even a signature piece of garment designed by the late Alexander McQueen. In addition, the visual vocabulary include masks of the ilk you’d use to masquerade at a Venice Carnival.

Terri Duan, who originates from China, is without trying a type of hybrid between East and West. Nearly 20 years in the UK and the three recent years in the Netherlands help explain her unique oil-painting style to some extend. Take for instance the propensity to apply fish to her works. According to Duan fish are used to signify plenty in Chinese culture. On the other hand, frogs are western imports. They not only refer to the frog kissing in order to find the proverbial prince. They also refer to the trials and tribulations of our everyday life whilst trying out stuff in the know that most of it will not work.

Duan often works on two canvases simultaneously. The finish you obtain from oil dictates that paint must dry on one canvas before you can return to it. Other times the jury is out to deliberate on whether to go in one or another direction on a painting, and then this pendulous stunt proves valuable thinking time away from the canvas in question. At the end of the day (you’ve already guessed it) Terri Duan literally sleeps on the problem of painting the dreams.

The artist is currently represented by the Gallery Kunstbroeders in the Netherlands, who are also hosting the event Chinart to raise awareness and interest of contemporary Chinese art on the European continent. You can find more information about Terri Duan on her website. 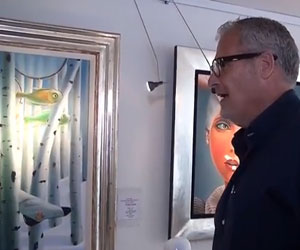 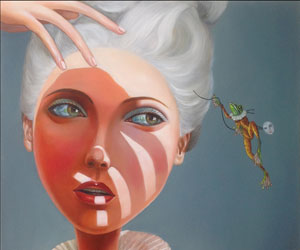 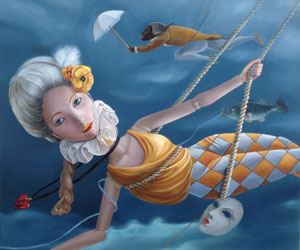