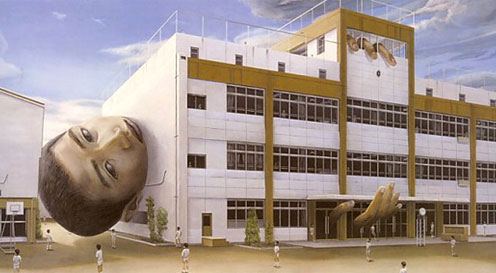 Depicting the spleen of Japanese life

An artist who is receiving growing recognition is the Japanese Tetsuya Ishida who tragically died in 2005 from a train accident aged only 31. In 2008 Christie’s Hong Kong auction sold one of his untitled works for £236,000. Four years after his death, his family was awarded the purple Japanese Medal of Honour, a decoration reserved for outstanding contribution to art and academia.

The surrealist take on Japan

Ishida’s art is very memorable. There is something unhinged, lonely and claustrophobic about many of his neo-surrealist paintings. Ishida repeatedly refuted that his paintings were self-portraits, and that the works were autobiographical. There was also nothing about his character which was depressed in any way. But we could say that the person who featured on several of his paintings, and who shared some likeness with Ishida himself, was being placed in uncomfortable containers about to burst and displaying some form of dilemma.

The artist’s intention with the work was to comment on the more sinister aspects of everyday life for so many Japanese citizens. The art is a reaction to Japanese society and its norms at the turn of the 21st century; and as such it might prove an accurate timestamp for the future. The works might be the fissures historians want to iron out in their depiction of the good old days.

In this grim portrayal, you sense that society is a mold within which children are expected to study their entire childhood away in order to navigate the future high-tech society of Japan. A society consisting of cloned high-performing people on their daily commute and grind as corporate robots.

Japan is not only known for being competitive and hardworking, it is also known for being crowded. Those who study softer ‘ologies’ purport that you can always tell how crowded a nation is by the relative politeness of its inhabitants. But you don’t have to look any further than how people refer to their sleeping arrangements. In continental Europe where people have relatively much living space, you mention the total square metres. In the UK you call a house 3-bedroom even if the bedrooms are so tiny they are unfit dwelling for hamsters. In Japan you work everything up in tatamis. I.e how many rollout 2-by-1-metre mattresses you can possibly squeeze into a room.

In Ishida’s art you clearly detect this sense of being squashed into smaller spaces but also crammed into some societal expectations of performing a role or a function. However, you also see a utilitarian use of the individual, as evident in human form being morphed together with some object performing a function, be it a military tank, a desk, a urinal or a building.

Ishida did not conform himself. He studied art and visual communication much against the wishes of his family, who neither provided any form of encouragement nor financial support. But slowly but surely they warmed to the idea. Ishida, painted because he could not stop painting. On local TV, he once stated that:

he felt compelled to continue painting people at mercy of Japan’s contradicting nature of its social systems for as long as they existed. 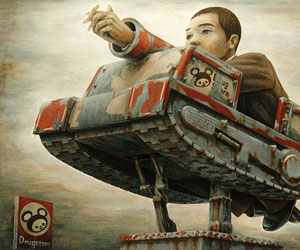 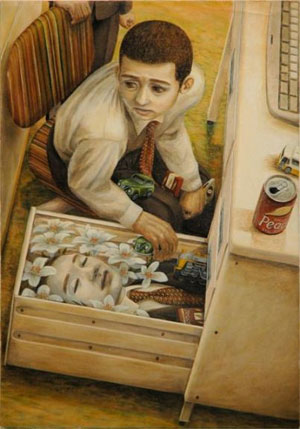