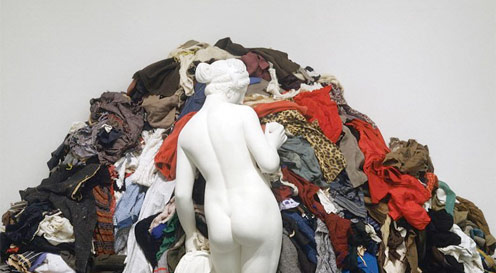 Based in Turin, and born in Biella Italy 1933, Pistoletto is one of the most interesting artists that Europe has produced.

His career spans several decades and he shows no sign of slowing down. A busy life with a strong work ethic has made him known as an artist ever since the late 1950s. In addition, he has been a vocal art theorist since the mid 600s, and one of the strongest proponents of the Arte Povera movement in Italy and abroad. He has also been an activist with ‘poor actions’ or Azione Povera.

The modest artist hasn’t done anything more complex than holding up a mirror unto society, followed by dropping a few hints as to where he felt it was all going. And so Arte Povera was coined by the art critic Germano Celant in 1967 to place a label on the art of Pistoletto, Paolini, Boetti and the likes — sort of 8 years after some of them actually began. The same year as ‘arte povera was invented by an art critic’ his work was awarded first prize in the São Paolo Biennale, and since then Pistoletto has been part of the furniture in prestigious museums such as Tate and MoMA. In 2003 he won the Venice Biennale’s Golden Lion for Lifelong Achievement, An Louvre in Paris mounts a large exhibition of his works in 2013.

Being a Son of a frame maker and painting restorer, Michelangelo Pistoletto was no stranger to art from a young age. There is more to him than the opti-pesimistic exploration of consumer society between the years of 1967-1975. In his work you also find experimentation which is similar to the kind of minimalism that has evolved independently in the USA. In fact he has in some regards gone from the complex to the simpler in terms of execution but quite opposite in terms of concept.

After working in his fathers restoration work shop and before art academy he worked with figurative art including portraiture. In 1960 he produced a detailed self portrait painted in oil and acrylic on a silver-leafed canvas. Round about those years he did several pieces on either mirror or polished metal to reflect the viewer with the pieces and melt the observer together with the art. To make the stuff stick, he had to venture out in screen printing. it omes as no surprise that he has experimented in many other techniques and as collages, photography and materials such as plexi glass, stone and polyurethane.

Azione povera and other performances

He has not shyed away from video, and performance art either. For instance, he was the founder of the street theatre ‘Lo Zoo’ in and considers any form of expression art including writing and performing – All of which occupied him a good part of the 1970-80s except for a few gap years away from art in the mid 70s.

In more recent times he rolled a giant ball of newspapers through the streets of London. It was repeating a political stunt from the streets of Turin in the sixties called ‘walking sculpture’. In those days, it was a statement made by him and his wife Maria in the turbulent age of student riots. On the 23. May 2009, both the idea and context were a little lost on the average Londoner. But, it helped raise awareness of an exhibition at Tate Modern. Successful repetition is one of the tricks he is fond of. Many of his concepts are by nature assembeled-dissembled over and over again. This is why important Works like ‘the labyrinth’ is dated 1967-until now.

A pile of ironing to do, hu?

Venus of the Rags

One of Pistoletto’s more poignant contributions to art is the 1967 Venus of the Rags (Venere degli stracci) or should we say venuses, because today she exists at various locations sizes and piles of discarded rags. The installation consists of the goddess of love in white Greek marble. Her back is turned to us in shame and looking straight into a pile of materialistic rubbish. It is all no coincidence including the fact that the pile is well over her head.

Venus could not be created of the finest Italian carrera marble, because then it would not wash with the notion of ‘poor art’ and be as radical as it was in the late sixties. It says all sorts of things at the same time depending on who you are. Firstly, it is a social comment on the buy and throw away materialism not too disimilar to Pop Art. Secondly, it is about the dismissal of a classical set of values and going for the banale and yet impactful.

Your grandmother would probably feel sorry for the young lady having all that ironing to do, – and that too would be a sensible projection of meaning. It certainly, would not offend the artist the least. 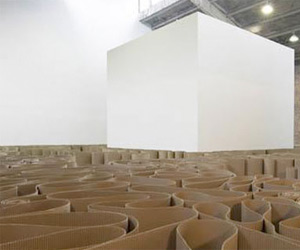 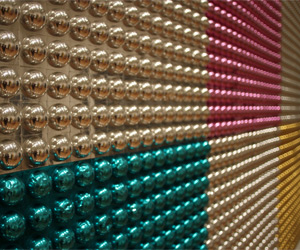