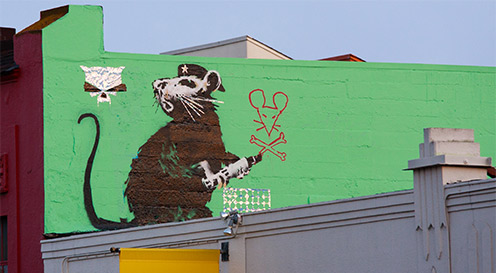 When notorious for having been a street vandal, you have to travel incognito forever or come clean and foot some bills. For the artist Banksy, at least that is reality, and in a perverse sense, that permanent level of secrecy keeps producing a constant media frenzy; a fact that has boosted the value of his art immensely.

The price hike would now make it possible for the artist to reveal his true identity. But why now, why ever? All that free publicity might slowly but surely disappear and the political impact is all the stronger for leaving things as they are.

The press absolutely loves this clandestine neither here not there persona for a number of reasons. For one, there is always a captive audience and very few facts to get in the way of a good story. Journalistic integrity can always be saved on the finishing line by a chief editor applying the words claimed, revealed, purported, and alleged.

In the UK, Banksy’s brand equity is now so great that it has turned things upside down. A juvenile delinquent who dares paint over Banksy’s work risks being dragged to court by someone. E.g. the rightful owner of a wall, who happens to have been blessed by unsolicited stencilling work. The problem, however, is that the art cannot be authenticated and can only be attributed to the artist.

What to do, then? Apply a graffiti-resistant coating agent over of the very thing you wanted to prevent: Graffiti.

Ironic, to say the least.

The real world is often stranger than fiction when you consider that art auctioneers have attempted to sell the artist’s street art on location, leaving the problem of its removal in the hands of the winning bidder.

As for the for the more conventional way to the primary and secondary art markets, there is no end to the list of high-profile collectors lining up to have a slice of the action. Names such as Christina Aguilera, Kate Moss, Chris Martin, Brad Pit, Jake Gylenhall, George Michael, Bono and Jude Law are perhaps the best validation of the anti-establishment turning into establishment.

But when that is all said, Banksy is a great artist supplying us with social commentary and perhaps social change. Even a seemingly innocent mural, which displays two children paying their allegiance to the Tesco flag, is one big wake-up call. It is a chilling reminder of the power that the retailing corporation wields over us. Simply, they own the world’s most advanced customer loyalty programme. Undoubtedly, the NSA and MI5 envy certain aspects of Tesco’s information processing, not least Tesco’s cunning knack of predicting your next purchases. Indeed, Tesco achieved this long before the Facebook era when we all began documenting our own psychological make-up voluntarily — without loyalty points or other incentives.

Banksy is not only a graffiti artist, s(he) is also a painter, film director, and political activist whose work has spread across the globe from an epicentre in a Bristol suburb. Through the years, he has mainly made himself available via online media or indirectly through his long-suffering gallerist Steve Lazarides (who, by the way is no longer representing Banksy).

Banksy’s anti-establishment work soon developed into a gritty stencilling technique of high contrast and conceptual impact. The artist clearly favoured depicting rights abuses and hypocrisy. All forms of authority continuously receive a good kick up their proverbials as do all forms of unjust geo-politics. Thus you can expect dark sarcastic takes on everything from dumbing-down conformity, the bizarre notion of ‘war on terror’, surveillance culture, commercialisation and the way the media is used to distract us from the real issues that shape our society.

Dismaland is a recent point in case, where the artist has played a pivotal role in the temporary Bemusement Park on the seafront in Weston-super-Mare. The park conveniently takes the mick on Disneyfication and the way we numb our senses from near-apocalyptic consequences if we do not take stock and redeem our critical faculties and erosion of human rights.

Banksy has a distinct style, which some nonetheless compare to Blek le Rat, whose stencil work emerged in Paris in 1981. Banksy, however, says that he was originally inspired by “3D”, an artist who later became a member of the band Massive Attack. Banksy appears to return to certain motifs consisting of Uniformed personnel, guns and children. In addition, there are references to doom and the great stink. The rat also assumes an important role at times. Indeed, Bristol Museum is the proud owner of a canvas from the artist’s hand, which depicts a rat defacing a Damien Hirst dot painting. 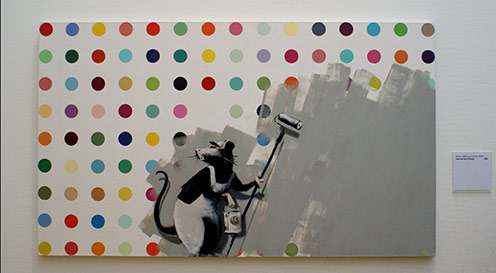 With that level of notoriety, there have been countless attempts to work out the artist’s true identity. All sorts of plausible and implausible hypotheses exist, from the artist being more than one person, to being a woman. His real name has been guessed as David or Robert Banks, neither of which offer much in the way of disguise. Unless, of course, the artist thinks we all consider Banks(y) a double-bluff identity. Finally, the reference to banking has cropped up, which is not daft at all.

A decade ago Banksy produced many fake £10 notes, which in turn were spread to crowds attending the Notting Hill festival. On the notes, the artist had substituted the portrait of the Queen with that of Diana, Princess of Wales, and instead of saying “Bank of England” it was saying “Banksy of England.” 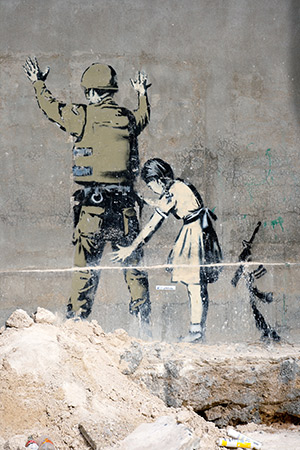 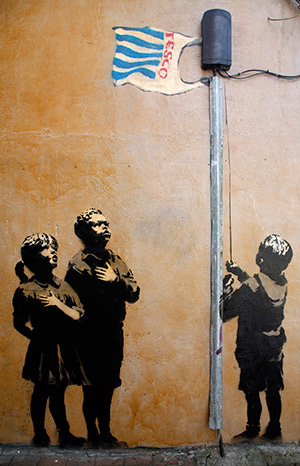 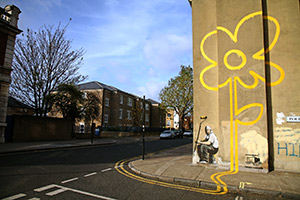 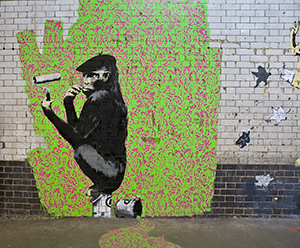 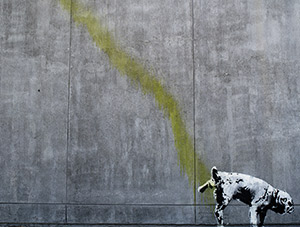 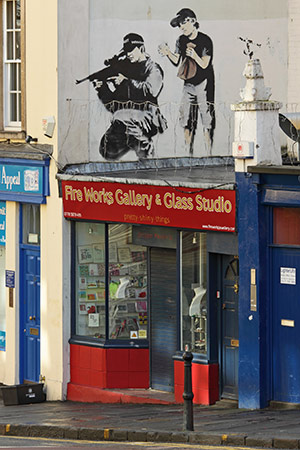