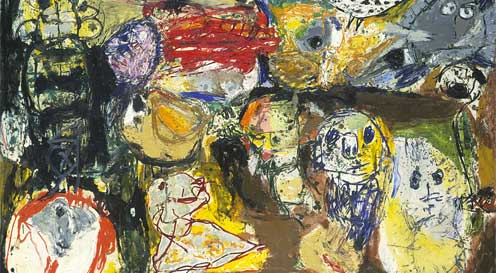 In for the snake bite?

Formed at Café Notre-Dame in 1948, CoBrA was a highly influential art group which only existed for three years. Some still consider it the last major avant garde movement of the last century, and the catalyser behind European abstract expressionism.

Before you think snake, the acronym was coined by Christian Dotremont to mean ‘Co’ for Copenhagen, ‘Br’ for Brussels and ‘A’ for Amsterdam. Those were in turn the cities which were the homes to the participating artists – or their nearest European capital city.

However short lived, the international achievements of the group were quite remarkable. A series of collaborations between its members called ‘Peintures-Mot’ led to two large international exhibitions. The first of which was held at the Stedelijk Museum in Amsterdam, November 1949, the other at the Palais des Beaux-Arts in Liège in 1951. After disbanding the group, CoBrA members continued to be associated with the various artists who took part in the CoBrA initiative.

The founders of CoBrA

The driving forces in the art movement

It is always a little unfair to rate the artists against each other on their relative merits. However, today Karel Appel is considered one of the greater CoBrA artists and perhaps the one whose sculptures, paintings and tapestries have defined its legacy the most internationally.

Asger Jorn, on the other hand has been credited for being the person who really took the initiative to form the pan-European group by doing much of the preparatory work in the 1940s. Incidentally, one of Asger Jorn’s paintings sold for a record high of 16,5 million Danish kroners in 2002.

What is CoBrA art?

Sometimes the best way to describe something is by comparing it to something else. Mistakingly, people jump to the conclusion that the works of CoBrA were action painting or rage painting. But the art, which is not just painting, shows signs of being much more deliberate and conscious in its process. For instance, a substantial amount of the work incorporates figures, heads and landscapes into the abstractions even it is is merely trace elements.

CoBrA devised a manifesto of sorts, together with publishing a periodical aptly termed ‘CoBrA’. The philosophy behind either was quite rational considering that it:
• set out a clear and shared direction
• marked off the goal posts, and
• did everything not to hamper the creativity of its members.

For instance, it offered the artists complete freedom over colours and form, except for being in marked opposition to surrealism. In addition, it stated that it was modernistic and humanistic in essence; and finally, the methodology was that of spontaneity and experimentation. Examples of positive influences were children’s drawings, art from indigenous cultures, and pioneering work in semi-abstraction by Paul Klee and/or Miró.

Beyond this shared vision, there were many constructive discussions taking place between its members, plus numerous ones which were less so. An example of committee thinking was the name change of the group to Internationale des Artistes Expérimentaux. At this point the group had expanded to include many artists from Europe and USA. It did not quite roll off the tongue and as any marketing professional would tell you, it would not work, and thus the name CoBrA has stuck with us. 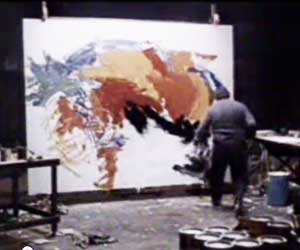