Kluge — the odd ball in opposition

Despite of having his application for the Royal Academy rejected more than once, Thomas Kluge has enjoyed much success and received much recognition for his works of art. Amongst other things, he is known for his portraits of the Danish Royal Family, the former prime minister Anders Fogh Rasmussen and a host of other prominent persons.

In Denmark no other contemporary artist divides the population in halves as Kluge does.

In retrospect, Thomas Kluge’s legacy is that of having upset us by not really being upsetting

Kluge happens to be a ‘realist’ more than a century after the established art world decided and dictated that realism was to be avoided like a plague.

Aside from upsetting the long-settled orthodoxy of modern painting, he also paints in a rembrandtesce way.

The artist uses modern acrylics, and relies quite heavily on photography as sketches. However, he applies layers upon layers of under painting in a technique which is akin to the old Flemish masters. He painstakingly uses glazes and extremely thin brushes, and over the years he has developed a fondness for perfect lighting and black backgrounds. The latter make the portraits benefit the most from the optical illusions which chiaroscuro has to offer.

Why this approach continues to upset the art establishment in a small Scandinavian country is perhaps best understood by knowing what had gone before. Since the end of the Second World War, Danish art soon evolved into having an international edge as evident in the abstract works of e.g. Asger Jorn of the CoBrA group.

A backlash in the public funding and patronage of contemporary art came in the form of Peter Rindal. ‘Rindalists’ quite eloquently argued to the government and public at large, that there should neither be support of nor tolerance towards any art, which they did not understand. As it happened, Rindalistic understanding of art was limited to realist and historical art only.

Thomas Kluge treats intolerance with a decent level of tolerance

Rindal did not succeed in the end, and luckily public funding continued to support arts of all kind. It goes some way, at least, to explain why the Danish Art World later acted so strongly to any artist who might have fitted into a mold that Rindal would have approved of. Not being an abstract artist, might have made Kluge one of the casualties in all this. But since Kluge does not think of himself as a victim, he never became one and painted on regardless. The outlaw could have placed himself in opposition. Instead he remained calmly indifferent to it all. Besides, the artist has always enjoyed abstract and conceptual art as much as he enjoys working with realist art himself.

A portrait is a story

Realism or neo-realism is perhaps also terms which do not sit comfortably with Kluge. It implies photography to us modern humanoids, and yet his paintings are so much more than photos. A good portrait actually has a narrative about the person and tells the beholder who the model is, and an important aspect of the artists work is to spend enough time with the subject to really understand the model.

Thomas Kluge (Larsen) was born on 6 March 1969 in Glostrup, but grew up in the little scratch-arse village of Tybjerglille Bakker near Næstved. A defining moment in Kluge´s youth was a job interview at a local advertising agency, in which he was being asked if he would not genuinely be better off as a painter, than a graphic designer.

Except for a short stay at Holbæk Art College, the artist is largely self-taught. Either way, he would have succeeded sooner or later. Kluge’s debut as a recognised artist coincided with the acceptance on the prestigious Charlottenborg annual autumn exhibition for upcoming and established artists in 1993. The acceptance committee are very selective indeed, and the competition to enter is always fierce.

Up through the rest of the nineties and into this millenium Thomas Kluge has received many commissions and exhibited solo several times. One of the recent highlights was the exhibition ‘To be or not to be’ held at Kronborg Castle in 2009. The title resonates with William Shakespeare’s famous line from the play Hamlet, which incidentally took place at Kronborg Castle. However Kluge’s take on it was just as much a reflection of the prominent people he had had the pleasure of portraiting and their implied authority. 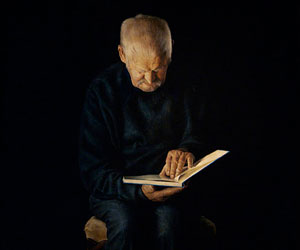 Portraits with Kluge´s frequent use of Chiaroscuro 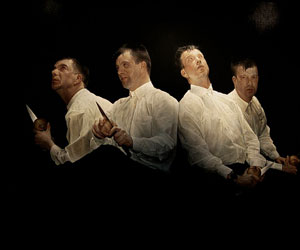