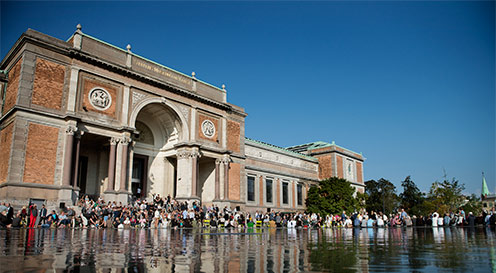 View a unique collection of art in Denmark

Statens Museum for Kunst, or SMK is a welcoming national gallery engaged in the preservation of the very best Danish and international art; followed by making it accessible to the public at large.

Admission is free to the museum collections, though nominal admission fees may apply to major temporary exhibitions held at the venue.

SMK is the real deal

One of the exciting things about the gallery is that it is a living and breathing experience encouraging all walks of life to engage in art. Essentially, it offers us a cutting-edge national treasure on par with the Tate, and the Louvre. While it may not be true in terms of sheer square-metric scale, it is is at least in cultural impact and creative significance.

Long gone are the days when museums of that ilk were dark, stale-smelling places inhabited by aloof custodians who hushed on children, and suffered the same dusty collection for decades on end. In contrast, the National Gallery arranges guided tours, workshops for children, live performances, concerts and even co-hosts televised art quiz programmes, award ceremonies and business events.

In that respect, the National Gallery of Denmark is well behind an equally busy and impressive schedule of temporary exhibitions. The programme is available on its website along this path.

The programme can be viewed on the website which displays an event calendar. The overall success of the programme is a testament to equal parts of dedicated creativity and intelligent curation. It is often a thought-provoking product underpinned by thorough research carried out by the museum itself. Works by younger Danish and international contemporary artists are generally exhibited in the x-room.

Along with all the temporary, the museum is also called upon to offer a much needed permanent exhibition. It serves the role of providing us with an unbroken record of art harking back in time. Hence, the permanent exhibition offers what a temporary exhibit could never. I.e a unique view of art over 700 years, which is of utmost importance for anyone who wants to piece together a chronology, and understand art in the context of the age and society in which it was created.

The collection thus comprises of several masterpieces of international artists such as Dürer, Mantegna, Matisse, Rembrandt and Rubens.

On the Danish home turf, the exhibition is graced with the works of more home-grown talents such as Eckersberg, Hammershøi, Jorn, Kirkeby, Nolde, Elmsgreen & Dragset. The museum also houses the largest selection of Danish Art from 18th century and up to cutting edge contemporary and emerging art.

Both the national and the international perspectives are important in art history. This is because Danish art, however unique, benefits from being understood in the context of international art, and vice versa. E.g. The French art historian Hector Obalk, has compared Ingres to Eckersberg in the televised series Grand’art, and Michael Palin has created a portrait about his fascination for the art of Hammershøi. If you have never visited SMK, then you might still have seen some of its art somewhere else. The National Gallery of Denmark both lends out and exchanges selected pieces of art with other international art museums. We all benefit from this, which is yet another incentive for visiting our museums on a more frequent basis.

In the autumn 2014, the museum inaugurated a large garden offering a welcoming space to enjoy the sun, watch children play and to rest and sip beverages.

You find SMK at a good central location in Copenhagen

The museum and its gardens are steeped in history. Today it is wedged in between the remnants of Østre Anlæg, part the old naval defence mechanism and just a stone throw away from the Royal Palace ‘Rosenborg’. Every art aficionado cannot go wrong by going to SMK. Its visitor friendliness helped it win the EMYA award in 1994. In 2015 SMK won the award as the best culture experience in Copenhagen by a long march. A contributing factor was the introduction of SMK Fridays in 2014, which has been crowd puller ever since.

As a bonus you can also visit ‘Den Hirschsprungste Samling’, another important art collection located at the same plot of land as the National Gallery of Denmark – time permitting, of course.

The National Gallery of Denmark is not only situated at Sølvgade in Copenhagen, it also owns a little gem at the harbour front near Amalienborg Palace. In an old warehouse, the Royal Cast Collection exhibits plaster casts and reliefs. In turn, these originate from collections, museums, churches and public places from all across the world. Here you can enjoy replica sculptures of Venus de Milo, Venus of Willendorf, and the best of Michelangelo. Again admission is free of charge.

Please note that the photos in this article have been supplied by SMK (© National Gallery of Denmark, and its originators; all rights reserved).

All days except Mondays

'Caféen', situated in the white building.

guided tours can easily be arranged

SMK bookshop offers books and periodicals on selected artists, art history, art movements as well as reproductions of art in the form of posters, post cards etc. You can also order online at www.arnoldbusck.dk

• No pets allowed except blind dogs and teddies 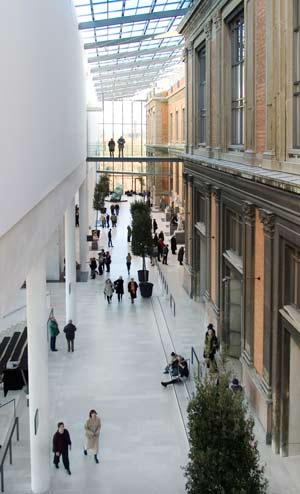