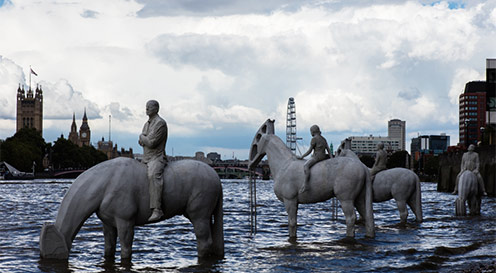 A set of bold sculptures by the artist Jason deCaires Taylor has been installed on Thames foreshore at Vauxhall embankment in Central London. The work, titled the Rising Tide, depicts a series of horses with riders and is temporarily positioned on the shoreline adjacent to the MI6 headquarters, opposite Tate Britain.

It is tidal works of art which are revealed and partially concealed by the rise and fall of the Thames twice daily. According to the artist;

The hybrid sculptures fuse oil extraction machinery with the equine form, referencing the working horse of London whilst drawing attention to our ongoing dependency on fossil fuels and the potential apocalyptic outcome of climate change

The plump part of a pump jack drilling machine is called a horse head and has been applied to each horse being depicted. Altogether, it is a cluster of four horses and riders. Now anyone who has read a book on popular psychology is keen to point out that every tall building is either a phallus symbol or some cock envy. In the same misguided way, it is easy to jump to the conclusions that this refers 100% to the biblical Four Horsemen of the Apocolypse or, indeed, that it reflects the award-winning documentary of the same title. A documentary which explains how we let corporate wankers run our greedy fossil-fueled FIAT economies into the ground like termites resulting in cycles of conquest, war, famine and death. For one, the riders are very different characters. The younger ones look ahead with optimism and hope whereas the suited business types appear to have a stance of denial or indifference.

The sculpture has been commissioned by the Totally Thames festival and funded by Lumina Prime8 and Art-Biosphere. The festival celebrates the river Thames during the month of September. The sculpture is produced with stainless steel and pH neutral high-density marine cement. After the festival, the sculpture will be rehoused somewhere else due to the expiring permit for displaying the work at its current location. 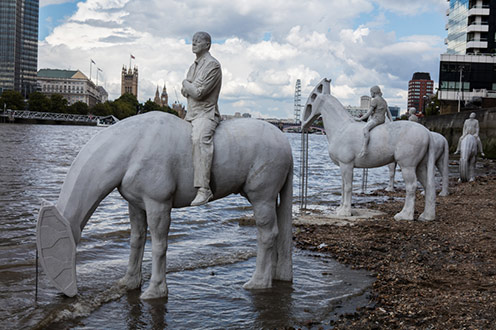 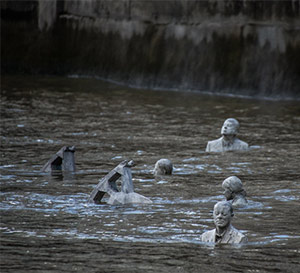 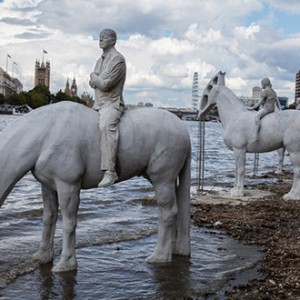 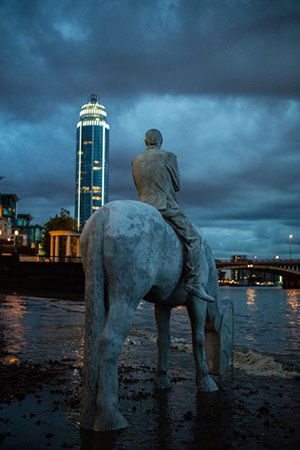