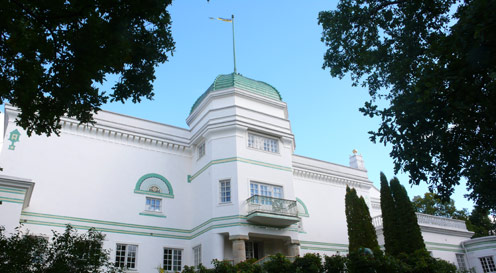 what happens when you catch the art bug

The Thiel Gallery or Thielska Galleriet in Swedish is an important art collection housed in the vila of Ernest Thiel (b 1859 – d 1947) in Stockholm. Thiel had many and varied interests as arbitrary as going hunting to translating Friedrich Nietzsche into Swedish. This fascinating Ernest character was first and foremost a successful banker educated in Germany. But more importantly, he was a patron of the arts with a keen eye for Nordic art at the turn of the previous century.

Thielska Galleriet was conceived of as a vila to showcase art from the outset. In 1896, Ernest Thiel bought his first large painting, “Morning Mood by the Sea” by Bruno Liljefors. However, as every art collector would tell you, one piece of art is never enough; and by 1901 Thiel had crammed his flat with art to the extent that architect Ferdinand Boberg was called upon to create the new residence in all its glory. However, at the rate by which Thiel collected art, the planned and otherwise generous space soon proved too small, and as a contingency Boberg was asked to extend the Vila. As a result the building was finally completed in 1907 after 3 years of construction work.

Thielska Galleriet is one of the finest art collections in Sweden and is unique because its patron shrewdly spotted art that was not only of his own taste but art that would also resonate with us today. Undoubtedly, some of the credit should be assigned to his second wife Signe who introduced Ernest Thiel to avant garde writers and artists. Either way, the collection is considered a bastion of Konstnärsförbundet, a Swedish Artists’ Society whose artists were against the constraints imposed by academic art.

Situated in the lush city district of Djurgården in Stockholm, the gallery showcases art from the late 19th and early 20th centuries. Within that period Sweden experienced a great interest in the movements national romanticism and symbolism, which is also reflected in the collection as a precise timestamp as featuring works by August Strindberg, Eugène Jansson, Carl Larsson, Bruno Liljefors, and Anders Zorn.

Thiel got rather smitten by the art of Edvard Munch, which resulted in an entire room dedicated to Munch’s art. Besides that, the upper floor was designed to have two large glass-roofed exhibition halls completely packed with paintings. The generous use of natural light in the two large spaces and the Munch room suggests that Tiel rarely did anything by half measure. He simply wanted what he perceived the optimum viewing experience of the art.

In addition to the Munch Room, there are other rooms named after Carl Larsson, best known internationally for exquisite watercolours of his family, and others in the names of Hjalmar Söderberg, and Axel Törneman. As something of a curiosity, there is a tower room at the top of the building. It contains prints by Munch and the death mask of Nietzsche.

The grounds can best be described as park and meadow. Around the Gallery you would encounter sculptures by Auguste Rodin and Gustav Vigeland. Ernest Thiel’s ashes are buried beneath the sculpture The Shadow by Rodin.

With its late art nouveau influences, the gallery and private residence of Thiel remain largely unchanged from the period when Thiel still inhabited the place. He was the sole dweller in the building between 1910 and 1924 suggesting the advent of domestic trouble. If that was not enough, Thiel really fell on hard times in 1922. This was not to do with his compulsion to collect art as much as some force majeure. Simply, his financial interests had been tied up in the warring zones of WW1. At the aftermath of this ordeal, Thiel proposed to the State of Sweden that it could acquire his home and collection. The state and Thiel reached an agreement in 1924, and the venue opened to the public as an art museum in 1926.

Thiel’s Gallery has yet to be adapted to the needs of visitors with reduced mobility. E.g Visitors have to negotiate staircases due to the lack of elevator(s). 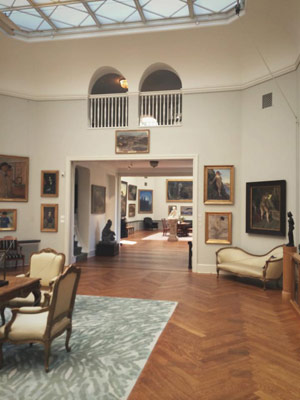 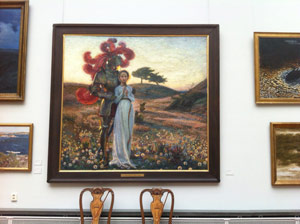 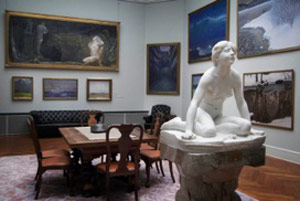