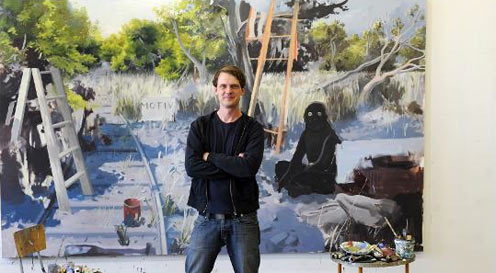 Taken for a ride - but a very fine one indeed

Characteristically, the painter Tilo Baumgärtel depicts spaces with an undercurrent of tension and loneliness. The compositions might at first appear linear narratives as loaded with minimalist fragments but they are everything but.

There is this eerie Edward Hopper-like quality to his works as one key ingredient, though Hopper never did it 100% like that. Then another ingredient is the expressive use of colour rarely seen elsewhere. In Hydroplane you see duo-tone areas clearly creating associations to printed materials. That is stuff faded unevenly due to exposure of too much direct sunlight. It is like a printed poster left a decade or so in a shop window with the magenta and yellow burned away. It is as if there is no life, and a sense of decay. The boat in this ‘would-be’ East German landscape is realistically painted, but the idyllic scene is disturbed by the fact that the house is submerged in water.

His paintings can be full of colours, and yet he is a master of combining them in ways that display a lifeless dullness quite deliberately. He is perhaps a master of capturing the former east block with- or without being conscious of it.

Up untill 1989, the whole nation could do with a lick of paint. Count in houses, garden gates, windows, train carriages; the lot. The uneasy feeling of the party keeping tab on everything, and things not being everything they appeared to be, are all factors visible in his art. However, it is worth mentioning that his expression probably would have been as allowed and encouraged by the former regime, as it is with the current. Much of the ‘old or original Leipzig school did their own cutting edge and ambivalent work we now mount in exhibitions.

Anoyther of Bamgärtel’s works ‘Wartezeit’ (waiting time) displays a lonely bus shelter. The trailing plant is looking like a person waiting, and the very presence of the plant suggest no one human comes and sits there very often, but it might also suggest that nature takes over from the concrete.

A third painting features (amongst other things) a step ladder plonked down outside. But it is somehow leading out of the picture frame, leaving you wonder what’s hanging above. A pitch black figure is sitting besides, but painted flat solid colour almost like a silhouette. It is this experience of being sent on a picnic. On your way to the agreed location, you find out the that edge of the world is constantly being extended with the aid of holograms, plasterboard and chewing gum. It is as if you are being told to crawl up a lightbeam knowing full well that the light might be turned off.

His work are best summed up as enigmatic visual riddles. They are somewhere between reality, dream or nightmare, and yet you are not allowed to call it surreal – because however good – the surreal of Dalí and Magritte comes with a heavy cargo. One which consists of art historical referencing and cross referencing that is a suffocating blow to contemporary artists by instantly labelling them as anachronisms.

The German artist Baumgärtel has been a rising star for some time. He has a strong work ethics and several good solo exhibitions under his belt. The exhibit venues chosen have been everything from the predictable European home turf to further afield such as China, South Korea and the US. His works have already been collected by Saatchi, Arken and Von der Heydt Museum, and he has been honoured with the award Sachsen Kunstpreis.

Tilo and the New Leipzig School

Born in 1972 in Leipzig, Tilo Baumgärtel is one of a few representatives of what is increasingly known as the New Leipzig School of painting in the same generations as Neo Rauch. As with so many artists before him, the journey towards art has been less than straightforward. Talent alone is never enough in art, and you have to make ends meet before you can turn professional. Hence, Tilo chose first to train as a skilled machine technician. He later enrolled in the local art academy: Hochschule für Grafik und Buchkunst in Leipzig. There he studied under the influence of Arno Rink amongst others. Somewhere along his academy days he turned professional and has been ever since. 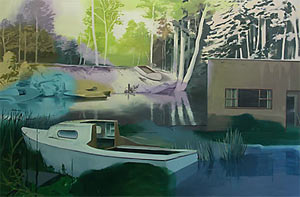 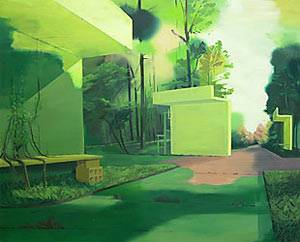