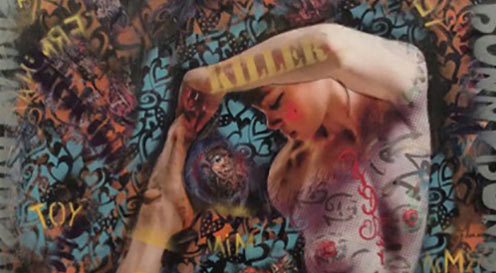 Your walls want works from the British artist TRXTR (Trxtr) even if their prickly demeanour make them divisive marmite characters and the cacti of the art world. They are all a visual bombardment of sorts, and it is surprisingly hard to describe what actually happens in all their layered glory. There is, however, a term for being fired at from all directions and that is ‘quaquaversally’. The only person who should absolutely not have survived that ordeal, actually did, and tragically he entered the word in the Oxford English Dictionary.

Speaking of words, the titles clearly help marinate the visual experience of the art to its full flavour. You cannot help but ponder over the titles Vanity Flare or Korean Cluster Buck. Conveniently, they substitute one word that rhymes with the word intended. This practice is not quite like Cockney rhymes such as Brahms and Lizt which are all rather innocent and particularly unconvincing with a Bristolian urrr. No, they are much more, and though they are also tongue-in-cheek, they reflect a reality which is everything but innocent.

At times, they are comments on the objectification of women traded as commodities on the web. Think here titles such as Bone Drone, Shotgun Wedding, 24 hour love. In this bewildering spectrum of online and mobile supply, there’s everything from the horrendous practice of brides being sold, people trafficking, and sex slavery, to the western semi-regulated industry where the tables have been turned completely. I.e. with the latter, the only ones being abused are middle-aged men with credit cards. Not the free, photogenic and fee-earning women who are eternally grateful for a sideline that help them graduate from university without the prospect of paying off student loans well into their forties.

Of course, the artist’s concern is broader and points to signifiers in the end game of any previously collapsed empire. The pattern of decadence, excess, joyless consumption, narcissism and an obsession with all things inessential all point towards the same pivot so offset that there is no point of return. It depicts a political reality where, amidst mass surveillance and sociopathic etiquette of reality shows, we are more concerned with re-arranging the deck chairs on Titanic than averting collision. Moreover, it is an unsentimental reminder of an age where agnostic science, ethics and spiritualism have all been scrapped in favour of the cult following of celebrities and branded consumer goods. Indeed, one of Trxtr’s pieces of mixed media is titled ‘Dystopia’ which – as an antonym to Utopia – alludes to a future society that suffers from self-inflicted and cataclysmic social decline. Trxtr is neither moralising nor trying to solve the problem. He is merely feeling compelled to record it.

The light at the end of the tunnel may well come from an oncoming train. From the scrapheap of any good train reck, you would detect some of the materials used in Trxtr’s mixed media compositions. Spray paint, plywood, canvas, glue, stencilled typography, printed words and photography.

Txtr is current with the work ‘Paradise Lost’ which is collateral at an Ebay charity auction for the Rainforest Foundation UK donating 100% of the revenue to the cause. Born in 1954, TRXTR, otherwise known as David Anslow, is based in the ‘Banksystani’ Somerset just outside Bristol. Long before arriving at his urban art, he studied fine art, printmaking and sculpture. For some time, he chose to focus on anti-war and anti-art, which then led to exploring biodegradable sculptures in hidden landscapes across the UK and US.

These day’s Trxtr’s art is increasingly collected as signed limited edition prints, and his one-offs have broken into the secondary art market and sold at Bonhams. His work is represented by the galleries Hang up Gallery, Opus Art, Leontia Gallery in the UK, and the Getup Gallery in the US.

The couple David and Sarah Anslow jointly run the Red Propeller Gallery. Together they are representing a stable of artists who the future might well consider more original than those graduating from cookie-cutters like the Goldsmiths.

At closer inspection, being both a gallery owner and artist turns out to be surprisingly commonplace.Take for instance V1 gallery, which constantly ranks in the top twenty galleries in the world. It turns out that V1 is co-owned by the artist Peter Funch. Funch’s works are openly and unashamedly promoted alongside works by other artists. But the reason it works so well straddling the two professions is straight-forward. By being a practicing artist, it helps you recognise, curate and nurture talent. Or put in another way, it takes one to know one.

More often than not, visual artists are taking part in other creative pursuits, and TRXTR is no exception. In Bristol, Trxtr became involved with the Sculpture Shed and Bristol Filmmakers Cooperative. Soon he was producing underground music videos and it led to the creation of ‘Dreamtime Beatnicks’ a venture producing music for independent filmmakers. It was whilst designing album covers for the music, that Trxtr began to develop his particular signature style. He enjoyed the freedom and creative flexibility that digital imaging offered and that unleashed his creativity in a way that had not happened before. 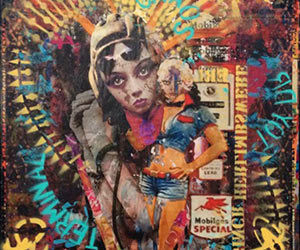 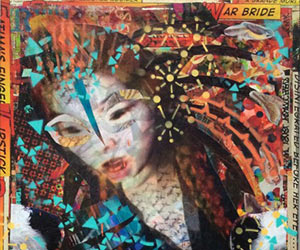 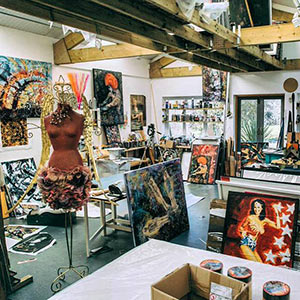