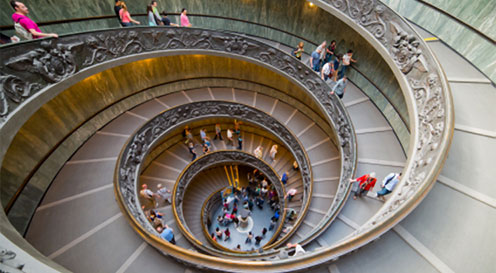 Established in 1506, The Vatican Museums are ‘must see’ attractions if you are an art aficionado and happen to be in Rome. The museums broke attendance records in 2011 with just over 5 million people. The Sistine chapel, which is on the route through the museums, accounted for 4 million visitors alone. It is no wonder then that the Vatican Museums keep topping the list of the best museums in the world.

The Vatican is something different in more than one regard

The museums are incredibly friendly towards visitors. But Like anything attractive, you have to adapt and adjust a little to its whims. There are five of them to be exact.

Number one is something that the museums have in common with Louvre, in Paris. You better buy tickets online to avoid queuing for too long on Fridays and Saturdays in high season. Admission to the museums has been free on the last Sunday of every month, and it has resulted in up to 2-mile-long queues. Good news is that the line can be completely by-passed if you have purchased a ticket in advance.

Second is more to do with respect for the Vatican and the role it otherwise has. So consider what you’re wearing. Just take cue from the nuns who are named accordingly because they can do none of this and none of that. I.e. no sleeveless blouses, no miniskirts, no shorts and no hats allowed.

Third, there are the regular dos and don’ts as upheld by many other museums. It means no umbrellas, no touching of objects, certain restrictions on photography (e.g. a complete ban in the sistine chappel), and the obligation to leave large objects in the cloakrooms.

Fourth, The vatican is a very inclusive and family friendly experience. However, If you are inconvenienced by poor mobility or you are a young family taking a stroller you, then you have to accept that architects in the past did not design everything to cater for your requirements.

Fifth, allocate the entire day to fully appreciate the experience, because it is not something that can be rushed through in an hour. But if you are strapped for time, and you need to home in on the highlights like a heat-seeking missile, here are some suggestions:

• The Sistine Chapel
• Leonardo da Vinci’s unfinished St. Jerome in the Wilderness
• The Transfiguration painted by Raphael in 1520 as his final and perhaps best piece of work
• Desposition by Carravagio 1604
• Raphael’s School of Athens, pope’s apartment

Cappella Sistina deserves special mention. It is the best-known chapel of the palace and official residence of the Pope in the Vatican City. It is of course more famous for its frescos as worked upon all through the Renaissance by artists including Michelangelo, Botticelli, Perugino, Pinturicchio, and Ghirlandaio. Pope Julius II called upon Michelangelo to to paint the chapel ceiling between 1508 and 1512. Michelangelo refused at first, because he was a sculptor. Then again in 1535 and 1541 he was brought to paint The Last Judgment. If you want a sneak peak you can look at this 360 degree panoramic and zooming view provided by the Vatican:

Finally, you’ll also come across the much art photographed and famous double-spiral stairway made by Giuseppi Momo in 1932, the map-, sculpture- tapestries and miniature mosaics.

It is perhaps best to park any preconceptions

If you’ve got too many preconceptions about the museums you’d be wrong. A common assumption is that it is just old figurative art bought in at ludicrous amounts of money. While you sense that time is being warped here, there is the Collection of Modern and Contemporary Religious Art that was added by Pope Paul VI in the Borgia Apartment in 1973. The collection exhibits fine work by Matisse and Chagall as well as abstract sculpture.

The next assumption is that it is all Roman Catholic art. Again here you would be greeted by a large collection of so-called profane art. Now the word profane smacks of prejudice. But its meaning has changed over time. The Vatican simply used what was then a polite and respectful classification of art that was not Christian. Hence you will find Etruscan, Roman, Greek and Egyptian artefacts in the collection, not to mention Jewish tomb stones that would perhaps have been lost had it not been collected by the Vatican.

Finally, the popular press tends to look at the symbiotic relationship between artist and the Vatican in a rather unflattering light. Often enough we hear that the Vatican was good at collecting and monopolising all the very best art.

Without argument, there has been quality assurance in the selection process of artists. However, the all powerful Catholic church could have commissioned the best art from anywhere in the world, and yet they chose local artists from what we now call Italy nine out of ten times. The next problem with the claim is that many artists could not have worked at all without the patronage of the church. In the past many artists considered themselves – and were regarded by others as – craftsmen alongside joiners and masons. And why not? They worked to a brief just like a graphic designer does as opposed to our current ideas of fine artist. Moreover, what is true today about provenance was also true back then. Today an artist’s career is made from being collected by the famous Saatchi and Gagosian. In the same way the Vatican helped make artists famous overnight, because it acted as a seal of approval to the rest of the world. 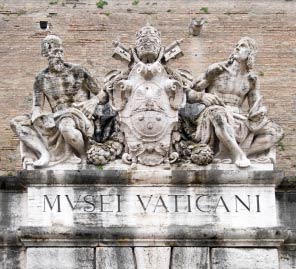 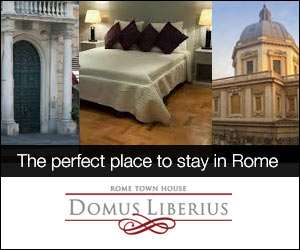