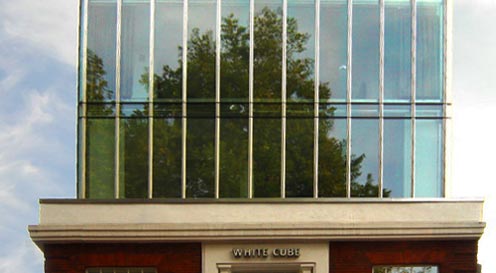 Everything but a big white elephant

White Cube is the name for several gallery locations privately owned by Jay Jobling. To be exact White Cube comprises of 4 locations of which the three are in London and 1 is in Hong Kong. All are great gallery venues worth visiting. Collectively they are one progressive gallery which has enjoyed much success over the last 2 decades.

However, White Cube is also a gallery which has made many people express their opinion in no uncertain terms. E.g. The stuckists felt the interior -amongst other things -was whiter than white and performed a public protest outside the doors of the gallery, and Charles Saatchi mocked the white austere space for being dictated by museum fashion.

A third example of the fact that you cannot be universally loved by everyone comes here. A group of anonymous artists created the whitecu.be website which hailed criticism towards the gallery and sucked up much of the less web-savy traffic otherwise intending to visit the Cube. As the .be happened to be a Belgian top level domain registered by its British authors, the Solicitors representing White cube managed to have the domain expelled from the local DNS registry and have the site closed down.

The policy of only displaying an artist’s work once turned out to be a fourth controversy. The rationale behind the original policy was sound, and if nothing else it ensured that no artist monopolised the ‘air time’ over other emerging talent.

Since then Gilbert and George, for instance, has exhibited more than once. This is quite possibly because owning a gallery makes you realise that you have to exercise your commercial astuteness to thrive and indeed survive. Today this ideal is, however, still outlived on the Bermondsey location and termed ‘inside the White Cube’

a programme of exhibitions profiling work by artists who have not previously shown at the gallery. The series provides a stimulating platform for exploring new developments in international contemporary art, across a range of practices and media.

White Cube as a launch pad for emerging artists

For all the just or unjust criticism levied at White Cube, the gallery has done far more good than perceived evil. In particular, its legacy is that of having been instrumental nurturing much British Talent before it became famous. It, like Saatchi, has been courageous enough to invest in artists who were not the safest bets in art, cf Britart, YBA, Young British Artists, and Goldsmiths.

In more recent years White Cube has not only benefitted greatly from being associated with great artists in the UK and abroad, but also with Art TV presenter and author Tim Marlow, who currently holds the position as ‘Director of exhibitions’.

The beginning and the various gallery locations

In 1993, the art enterprise humbly opened the doors to one of the smallest gallery spaces in the UK in Duke Street, London. The exhibit room was a small cosy cube, and hence the name.

However its impact in the British art scene soon proved to be everything but humble. The location was not arbitrarily chosen at all. Duke Street is associated firmly with art dealing, and the venue stated that it wanted to create ‘a project room for contemporary art’. The building itself is designed by architect Claudio Silvestrin and has been in use until 2002 when White Cube stopped using the site.

Today the main ‘White cube’ is found at Hoxton Square in a converted industrial building from the 1920s – but deliberately made to look cubic. It has approximately 2000 square feet of uninterrupted exhibition space. Again, it is a good size given real estate prices in London, but far from being considered a large space by Amercan cousins in the Colonies.

A newer and somewhat more impressive location, is the 25–26 Mason’s Yard, off Duke Street. The building was purpose built from the ground up to be a fantastic gallery. This time white, rectangular and with exhibitions spilling out onto the street and green.

A third location is the White Cube Bermondsey, which was opened on Bermondsey Street as late as 2011. In addition, you can find the only White Cube gallery outside the UK, at 50 Connaught Road in the Central District of Hong Kong. 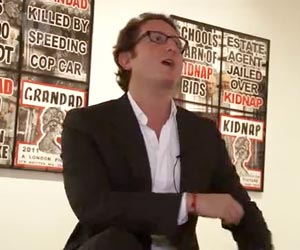